"The Black Cat" and "The Tell-Tale Heart"

Edgar Allen Poe is a world renowned master of gothic literature. Poe wrote, “The Black Cat” and “The Tell-Tale Heart” two of the most horrific short story masterpieces. Both stories are written in a gothic style and share elements of murder and insanity. Despite the many similarities, digging deeper into the true meaning reveals many differences.

The settings and characters of “The Black Cat” and “The Tell-Tale Heart” seem different, but in reality they are alike. On the surface, both stories take place in either a house or an apartment and have eerie and freighting night-time scenes.

Don't use plagiarized sources. Get your custom essay on
“ “The Black Cat” and “The Tell-Tale Heart” ”
Get custom paper
NEW! smart matching with writer

However, examining the two texts reveals that the stories are told as flashbacks from jail by the main character. For example, the first lines of both stories are about recounting an event. In “The Black Cat”, the main character exclaims, “For the most wild, yet homely narrative which I am about to pen, I neither expect nor solicit belief.” In “The Tell-Tale Heart”, the line is, “True!-nervous-very, very dreadfully nervous I had been and am; but why will you say that I am mad?” In both stories, the main character thinks that he is not insane and is very cocky and overconfident with the way he commits crime.

For example, in “The Tell-Tale Heart”, the main character reveals, “You should have seen how wisely I proceeded- with what caution – with what foresight and with dissimulation I went to work! I was never kinder to the old man than during the whole week before I killed him.

The structure and language of “The Tell-Tale Heart” and “The Black Cat” are similar, but individual in their own ways. Both stories use repetition of language to further explain the deep messages of the two tales. For example, the words, “madness”,”insanity”, and “sagacity” are used to describe the man in “The Tell-Tale Heart”. Furthermore, the words “peevish”, “atrocity”, and “vex” are used in “The Black Cat” to describe the main character’s relationship with the cat.

Both stories have a mood of horror that is used to frighten the reader by utilizing the tools of murder and obsession. Furthermore, Poe employs intensive detail as he highlights the murder scenes of both tales. For Example, in “The Tell-Tale Heart”, the main character reflects, “The old man’s hour had come… his eyes would trouble me no more”. In, “The Black Cat”, the main character remembers, “The fury of a demon instantly possessed me… I shudder while I pen the damnable atrocity.” These examples show the similarities and differences between the structures of the two short stories.

Edgar Allen Poe conveys the similar ideas of “The Black Cat” and “The Tell-Tale Heart” with subtle hints that can be seen throughout the two short stories. The two tales concentrate on mans descent into evil and the fact that evil never prevails. Furthermore, a theme of darkness and fear is present throughout the gruesome stories. Another similarity is the way that Poe reveals the climax in both stories. In both stories, the two sides of paranoia, a feeling of invincibility, and a fear of apprehension are apparent. In “The Tell-Tale Heart” the man seemed to think that he was invincible, but soon crumbled and revealed his atrocities due to guilt or insanity. Similarly, in “The Black Cat” the man killed without conviction but eventually tells the police of his evils. The main characters of both stories learn that despite believing that wisdom secures sanity, anybody may fall into darkness and pay a price. These are some of the similarities and differences of the two texts.

Edgar Allen Poe is a master of utilizing horror to both frighten and perplex his readers. With his vivid words and complex ideas, Poe uses horror to make his writing both classic and important. Poe reminds us that nobody in this world is truly safe from the horrors of man.

"The Black Cat" and "The Tell-Tale Heart". (2016, Jul 27). Retrieved from https://studymoose.com/the-black-cat-and-the-tell-tale-heart-essay?post 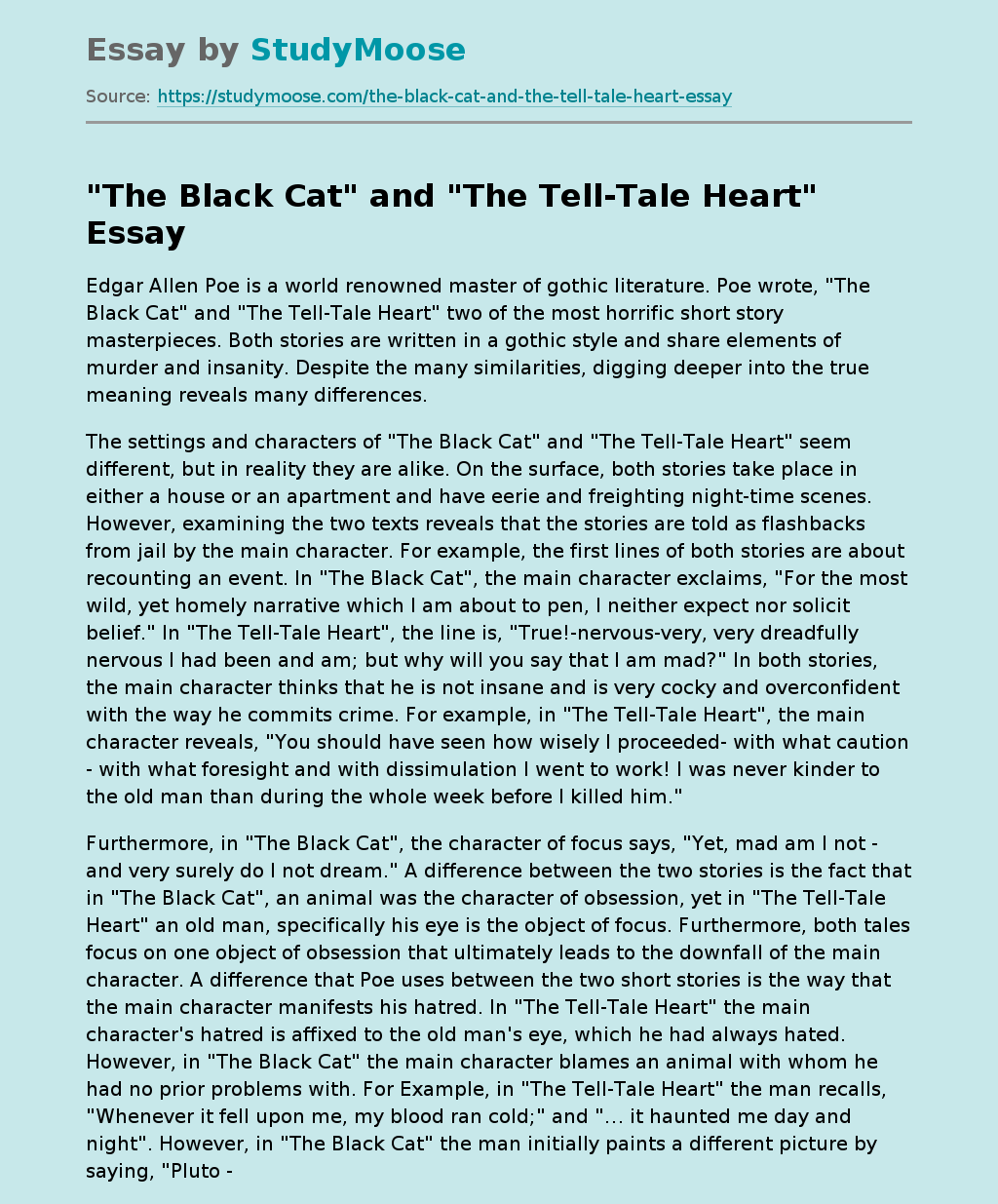