The Black Cat and a Rose for Emily

“The black cat” was written by Edgar Allan Poe, and it was a twisted, sick story about how a man that since his childhood was picked on by his classmates. Instead of having human friends, he owned pets that he took as his only friends. “From my infancy I was noted for the docility and humanity of my disposition. My tenderness of heart was even so conspicuous as to make me the best of my companions.” At first he had no reasons that could bring him to kill his first cat “Pluto”.

According to the story the cat gave him reasons to kill him, and with a second cat he had an excuse to kill his wife. “A rose for Emily” is the story of an African American woman that lives with her father. When he dies, she denies his death, keeping the body at home. Later on she meets a man, they talk for a while…a month or two, maybe three, and kills him.

When she is no longer known of, she is found on her bed next to the man’s dead body which appeared to be lifeless from a considerable amount of time.

Both of these stories were written in a gothic style, both representing a murder scene and domestic violence. One similarity that both stories share is that the main characters don’t seem to be able to accept death or any psychological trauma in a proper manner. A symbolism that appears in the story is the name and color of the cat.

Black is said to be the color of death, and Pluto was the name of a God of the underworld. It is true that the cat’s owner (whom remains un-named) takes the black cat’s eye at first. Then the next morning he regretted what he had done to the cat. “When reason returned with the morning […] I experienced a sentiment half of horror, half of remorse […] I again plunged into excess, and soon drowned in wine all memory of the deed.”

It was clear that the character regretted what he had done, and his guilt was so profound that alcohol seemed like a good option to relieve from torture. Also, Emily from “A rose for Emily” has trouble accepting the death of her father and refuses to accept the fact that he has to be buried. She refused to give in his corpse and kept it in the house with herself and their servant. “[…] she told them that her father was not dead. She did that for three days, with the ministers calling on her, trying to persuade her to let them dispose of the body” (Pg.93). This both lines prove that both characters have trouble getting over grief or guilt, so they opt for alcohol or denial of reality.

Another similarity that these two stories have in common is that Emily and the un-named character kill that one living thing that could leave them. In “The black cat” the un-named character first takes out the cat’s eye because the man believed the cat was avoiding his presence. “I fancied that the cat avoided my presence. […] I took from my waistcoat-pocket a pen-knife, opened it, grasped the poor beast by the throat, and deliberately cut one of its eyes from the socket.” The man noticed that the cat was backing up, leaving him, avoiding him, so he filled with fury and punished the cat for “attempting” to leave. Something strange about Emily’s description is that she was described almost the same as how you would describe a black widow. “Small, fat woman in black, with a thin gold chain descending to her waist and vanishing into her belt.”

Emily did something similar with the man whom was thought to be her fiancé. She originally killed him so that he would not leave her side like his father did when the neighbors buried the corpse. “The man himself lay in the bed. […] what was left of him, rotted beneath what was left of the nightshirt, had become inextricable from the bed in which he lay […]” (Pg. 96). Emily had killed the man before he had a chance to leave. To make sure he did not leave, she said no word about it, denying knowing a thing about his location. His life could leave, but his body she could not afford to let go of, so she kept it there in a room half ready for what seemed to be a wedding.

These two stories have in common that their main characters recurred to murder to either punish or keep their loved ones close. The repetition of decaying and death all throughout the story are present, which tells about a horrifying story of murders committed by two psycho people. They both have trouble handling the lost of someone they cherished. The cat’s murdered fell into fury when the cat stood away from him and Emily did not want her future lover’s body taken away so she kept it hidden in a room. These both two seem to be based on gore and gothic concepts that add another similarity to both of them. The difference is that Emily did not want to be alone, and the un-named character from “The black cat” invented that “second cat” to have an excuse to murder his wife.

The Black Cat and a Rose for Emily. (2016, Dec 26). Retrieved from http://studymoose.com/the-black-cat-and-a-rose-for-emily-essay 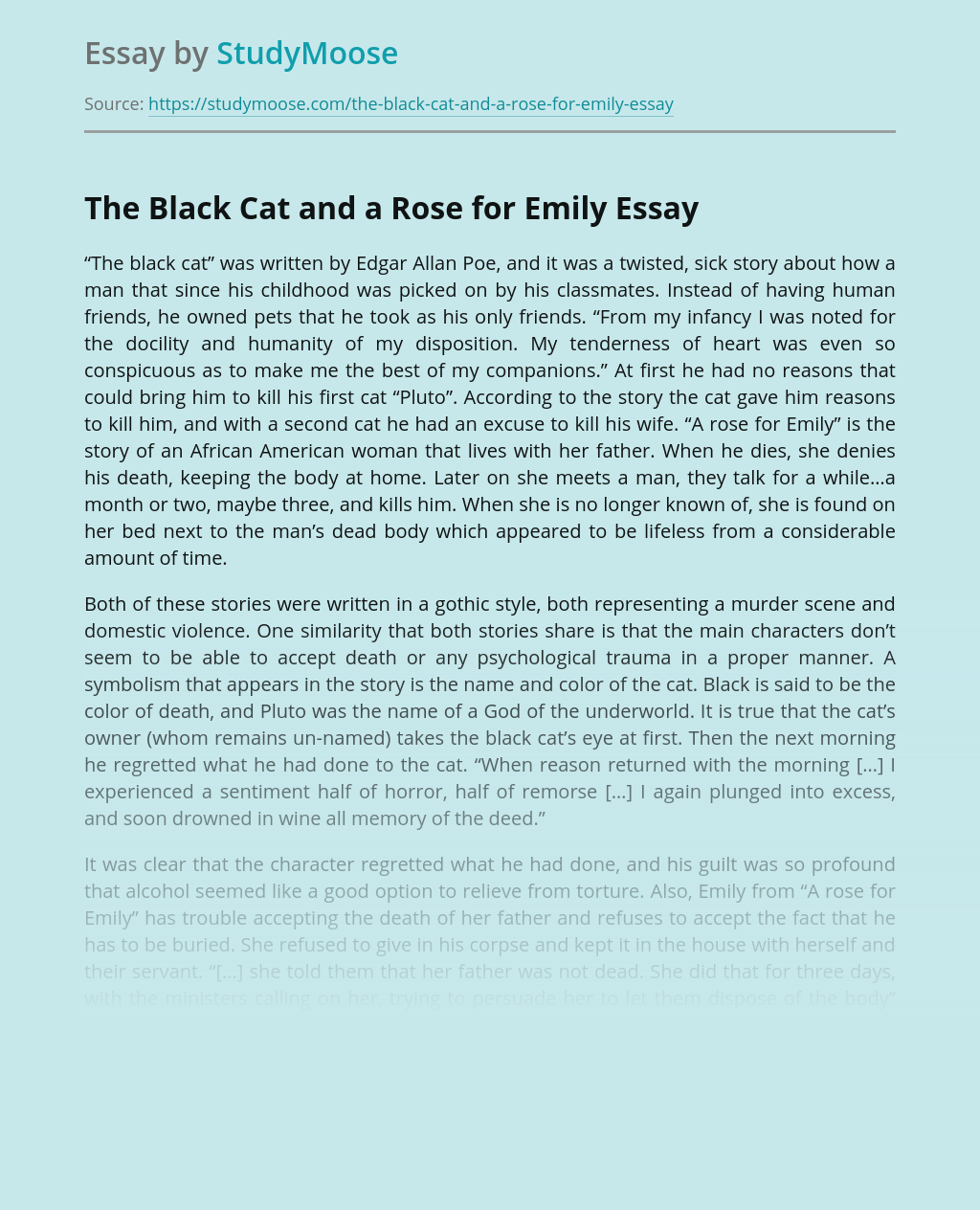 Don’t waste time
Get a verified writer to help you with The Black Cat and a Rose for Emily
Hire verified writer
$35.80 for a 2-page paper
Stay Safe, Stay Original