The Black Balloon directed by Elissa Down is a film about a family living with an autistic son. Throughout the movie, Thomas feels embarrassed being Charlie’s brother, he feels left out not only at school but at home too.

Thomas is the main focus of not fitting in but he is not the only character that feels like he doesn’t belong. Thomas’ brother Charlie may not be able to act or speak like other people do but Charlie still has feelings and does feel out of place by having a disability.

Turn in your highest-quality paper
Get a qualified writer to help you with
“ The Black Balloon Essay ”
Get high-quality paper
NEW! AI matching with writer

The family also as a whole deals with judgemental neighbours and people always staring and judging before they know the full situation. Thomas is not the only one dealing with issues and feeling like the odd one out, other characters have the same feelings too and hopefully they can work them out together along the way.

PARAGRAPH 1: Thomas not fitting in

Throughout ‘The Black Balloon’, Thomas is the odd one out.

Starting off as the new kid at his new school where Thomas is already feeling like a fish out of water. Barely able to swim, hand held camera shots go under and above the water showing that swimming in a struggle for him. A mid shot is also shown of a group of students grouped together and Thomas is separate on the side showing he is isolated from the people at his school. Not only is Thomas left out at lifesaving classes but at home too. In the film camera shots are used to show how Thomas feels when his parents put Charlie, his disabled brother’s needs first. When Thomas asks for the milk we see a mid-shot of the milk bottle with Thomas in the background.

The milk bottle does not move because Charlie needs attention and Thomas continues to look at the bottle, looking very upset. Thomas is so ashamed of Charlie having a disability and this was demonstrated when he uses words to describe Charlie like “He’s a freak”. This also becomes clear when Thomas sees a group of students making fun of the Autistic bus, a far away camera shot is captured, showing that Thomas is feeling embarrassed by his brother because he is different. By t the help of Jacki, she lets him understand and accept his brother and lets Thomas realise that he is never going to change and should start accepting Charlie for who he really is.

PARAGRAPH 2: Charlie not fitting in

Charlie has been autistic his whole life and he can’t control his actions and communicate in the same way as others. Even though having someone in your family with a disability would be very hard and stressful, the film tells the audience that it isn’t Charlie’s fault he acts this way. ‘The Black Balloon’ makes the viewer realise that Charlie is still a person and has feelings. Charlie may always be the centre of attention but at times he knows when he doesn’t belong. This was revealed when Charlie visit’s Thomas school and automatically feels out of place. Other students call things like ‘spastic’ straight to Charlie face, making him feel uncomftable and scared. Just because Charlie has a disability, doesn’t mean he’s not human. All people have feelings and emotions and although he may not be able to express himself like others, he can tell when he is different or feeling left out.

PARAGRAPH 3: Family not fitting in

From the moment the Mollison family move into their new home, they are judged almost instantly due to Charlie being different. Close up shots of the neighbours looking through the windows and through their fences judge the family without knowing the full reason and situation. Neighbours judged the family by asking Thomas questions like “Why’s your brother a spastic”. Also when Charlie has a tantrum at the supermarket we see long shots of other shopper’s faces as they go in silent and stare on with interest and amusement. These shots were effective in showing society’s attitude towards Autism because they show the looks that families with autistic children have to deal with. There is a lot of judgement from the public which the Mollison’s have to deal with being silently judged by the public nearly every day.

Thomas is one of the main focus’s of being left out but other characters like Charlie and the Mollison family as whole also may feel out of place at times. Thomas feels left out by not being able to swim and but by the end of the movie he achieves his bronze medallion. Thomas also feels ashamed having Charlie has a brother but he learns to accept Charlie for the real him. Charlie feels out of place when visiting the school and always being the odd one out, He may not be able to speak but you can tell by his emotions that he still has feelings. The Mollison family gets judged massively and this becomes clear when the general public stops and stares without knowing the full situation. ‘The Black Balloon’ shows that not everyone fits in but by the help of other characters and learning, they can all work together and not end up caring what other people think of them. 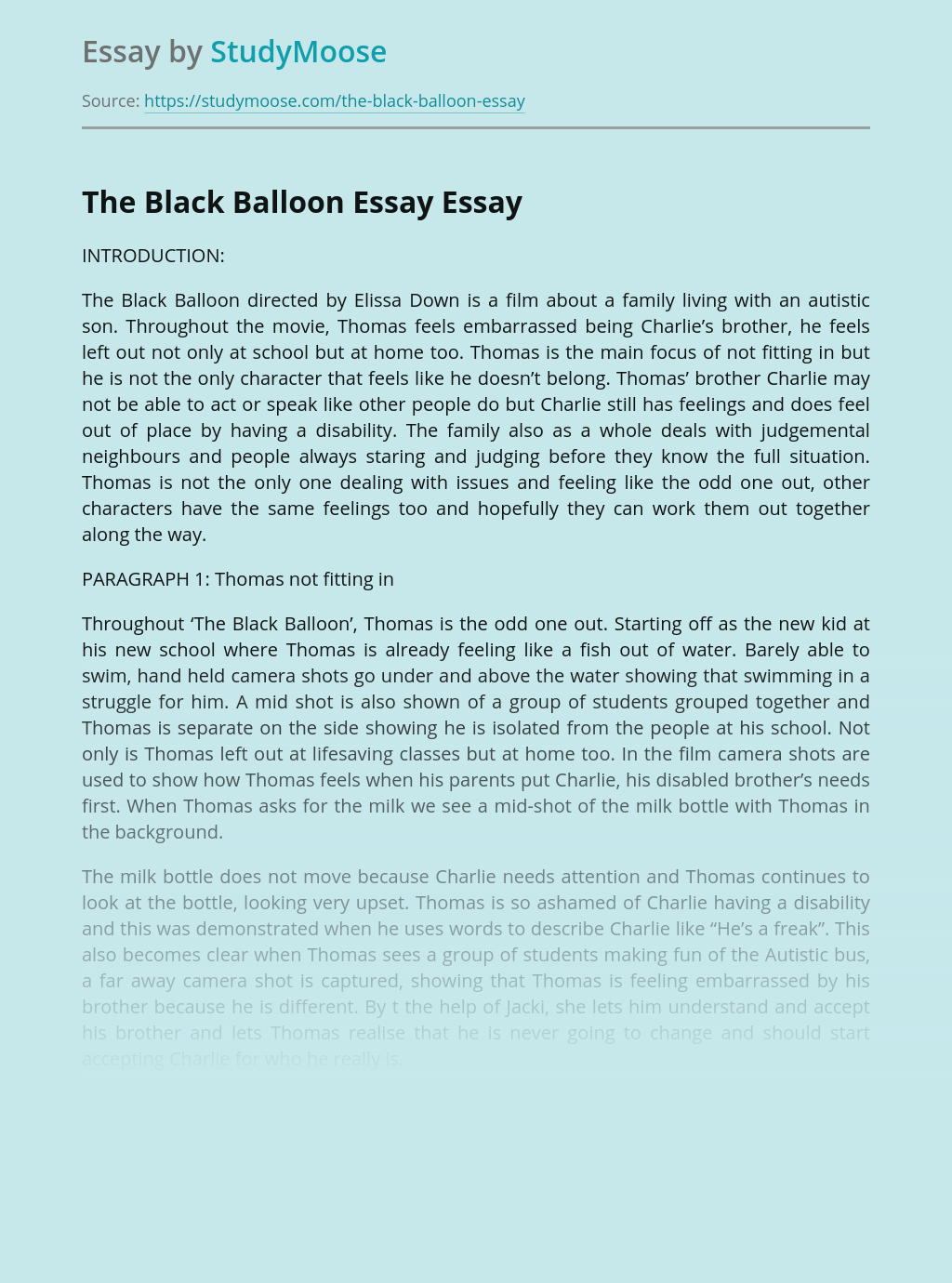 Turn in your highest-quality paper
Get a qualified writer to help you with
“ The Black Balloon Essay ”
Get high-quality paper
Helping students since 2015
Stay Safe, Stay Original