Ones ignorance could lead to their powerlessness. In Lisa Down’s film, “The Black Balloon”, the importance of taking care of and not judging people due to their disabilities and weaknesses is covered. The protagonist, Thomas, has an autistic brother named Charlie who he is embarrassed of and who is the centre of all the events in his life. The above stated idea of ignorance leading to powerlessness is conveyed in the scene where Charlie, Thomas and their father have gone to the grocery store and Charlie chucks a tantrum due to having to return some of the goods they wished to purchase because the father didn’t have enough money.

Turn in your highest-quality paper
Get a qualified writer to help you with
“ The Black Balloon ”
Get high-quality paper
NEW! AI matching with writer

While this is happening, bystanders stare with blank gazes as the scene in front of them unravels. This portrays the bystander’s powerlessness through the use of eye-level panning to show their anxious and confused faces, representing their lack of exposure and understanding to such disabilities and circumstances.

Thus, depicting their powerlessness through ignorance of not being educated about such things.

Moreover, it is not only the outsiders that show ignorance towards Charlie, but also his own brother. When Jackie decides to visit the Mollisons, Thomas freaks out and hastily locks Charlie in his room. The locked door symbolises how Thomas believes that Charlie should not be free at home but locked away in a mental institution. The ignorance of Thomas towards Charlie shows his powerlessness as he is in able to cope with the responsibility that comes with his brother.

However, in contrast to Thomas, the power of Jackie is shown as she confidently accepts Charlie. This is represented in the scene where Charlie pops up with Jackie’s tampon sticking out of his mouth.

After Thomas tackles Charlie down and rips the tampon out, placing it back in Jackie’s bag, she exclaims sarcastically and in a warm tone “At least it wasn’t used”, highlighting her power as she chooses to be accepting instead of ignorant towards Charlie’s sate. Similarly, in the text “The Power of the Powerless” by Christopher De Vinch, the protagonist also has an autistic brother. But, unlike Thomas, Christopher accepts his autistic brother as shown in the quote “Oliver still remains the most helpless human being I’ve ever met, the weakest human being I’ve ever met and yet he was the most powerful”. The use of juxtaposition show the acceptance Christopher has towards his brother, despite how hard it might be sometimes living with him. Hence, the idea ignorance could lead to one’s powerlessness. 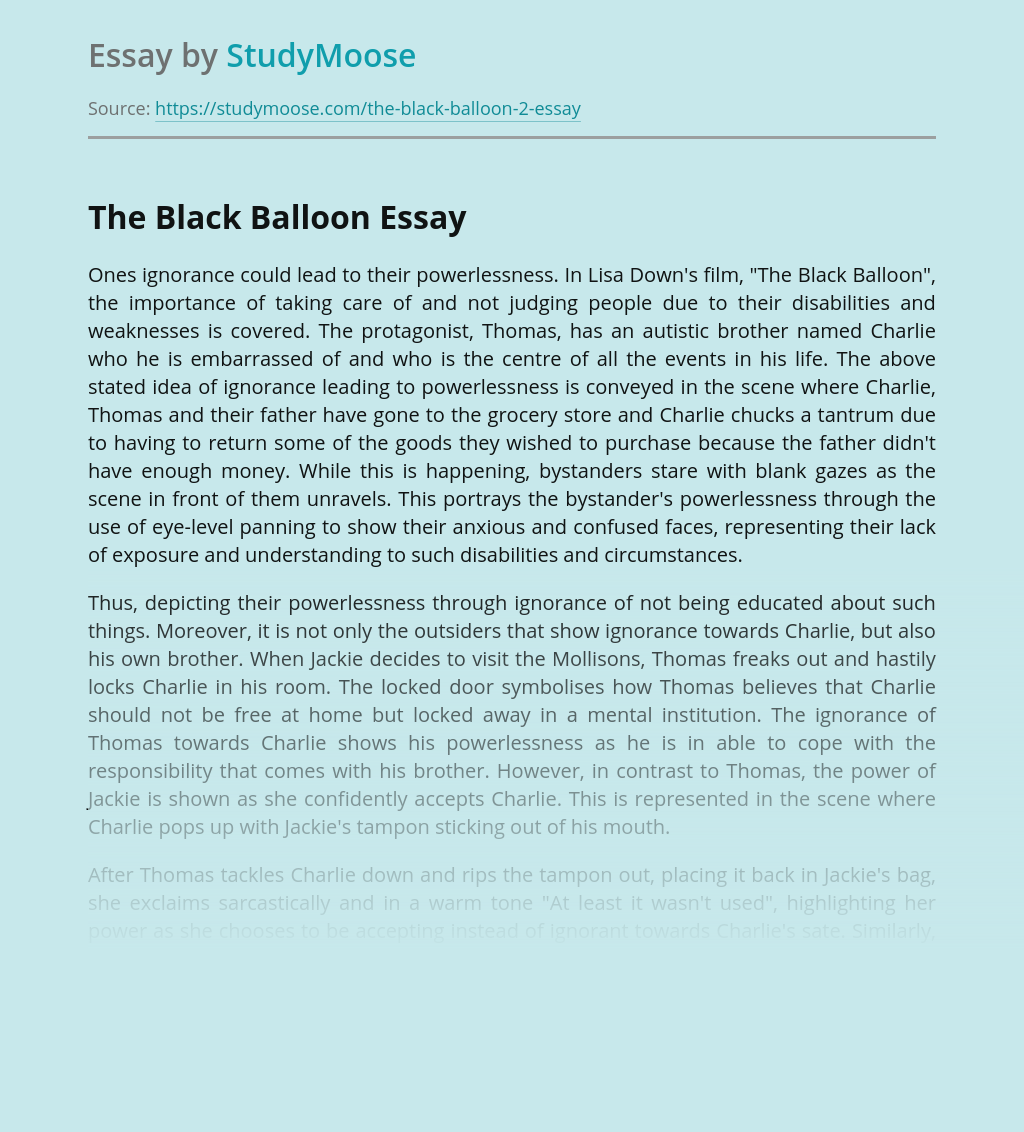 Turn in your highest-quality paper
Get a qualified writer to help you with
“ The Black Balloon ”
Get high-quality paper
Helping students since 2015
Stay Safe, Stay Original