'The Birthday Party' by Harold Pinter

The Birthday Party by Harold Pinter is a play composed of three acts, and is set in an old boarding house, run by Meg and Petey, who are a couple in their late sixties. There is only one boarder, Stanley, a scruffy, depressed-looking man in his late thirties who has apparently been a professional pianist. Three people arrive in the boarding house from the outside world: Lulu, a young woman who tries to get Stanley to go out with her with out success, Goldberg a powerful and threatening Jewish man in his fifties and McCann, an Irishman in his thirties who is quiet and menacing.

Don't use plagiarized sources.
Get Your Custom Essay on ‘The Birthday Party’ by Harold Pinter Just from $13,9/Page

It becomes clear that they have come in pursuit of Stanley and that they work for a shadowy organisation. Although it is never known for what reason they put him in the spotlight, interrogate him and eventually take him away.

Following the arrival of Goldberg and McCann they mention to Meg, to put on a birthday party for Stanley, even though Stanley denies the claim that is his birthday.

Meg gives Stanley a toy drum as a birthday present, which Stanley ends up beating with increasing savagery. We then see the first scene of interrogation. Goldberg and McCann begin to quick fire questions at Stanley, eventually reducing him to a state of mental distraught. The scene then segues into a small social party. The party atmosphere becomes hostile as Stanley is victimised in the course of playing a game blind mans buff, before losing control and firstly strangling Meg and then preparing to rape Lulu.

Act 2 is set in the morning after the party. Goldberg and McCann, it becomes apparent, have been working on Stanley through the night. Stanley appears dressed in a suit, clean shaven and rendered in his conventional appearance. Goldberg and McCann achieve complete dominance over Stanley and continue to torture him by leading him on to a table, pulling his pants down, asking questions knowing that he cant reply properly and taking photos of him with each other. When they finally proceed to take him away, Petey mounts a faint protest at the removal of Stanley, but backs down in the face of a threat to himself. Meg outwardly remains unaware that anything untoward has taken place as the play ends.

The lighting of the play was excellent all of the scenes and characters were appropriately lit and in the right amount of shadow, one of these scenes was when Goldberg and McCann were torturing him, the spotlight is on Stanley and Goldberg and McCann are walking in circles around him. This also happens at the beginning where Stanley does a monologue talking about his past experience being a pianistHe is lit by just the right amount of light, not so much as it is over bright but enough to draw the audiences attention to him. There was also a light shining on Meg as she listened to him, it was subtly diminished so that you knew that Meg was listening to him and the audience was able to see her when she interrupted.

One of my favourite scenes and also one of the most powerful was the ending just before Goldberg and McCann take Stanley away in their car. They had just made a mockery of him by taking digital photos of him with his pants down. While watching this it reminded me of the Iraq war of how the Americans are badly mistreating the Iraqi citizens and prisoners of war. I knew this wasnt originally part of the play and thought it was very clever and included more absurdity to the play.

An important major theme of the play was the struggle for power which was presented in Goldberg. However his power is always put into question, he relied on McCann to perform the more physical aspects of their duties for him and to sustain him physically by blowing in his mouth. Another major theme is Absurdity. For example despite the personal information on Stanley and the two mystery men, who or what they really are remains a mystery. Goldberg, in particular, provides all sorts of information about his background, but he offers only strange clues as to why he has intruded upon Stanley’s life.

However the most important theme in The Birthday Party was an image of growing up. Meg had a crushing combination of motherliness towards Stanley, having her as a mother image. Unfortunately Stanley is reluctant to leave the warm nest which Meg has made for him. He is afraid not only of the outside world, but also of sexuality outside the cosy mother-son relationship. Thats why her refuses to go out with Lulu. Also that is why at the climax of his mental crisis, his birthday party, he firstly attacks Meg, the mother-figure, maybe for not being aware of the presence of Goldberg and McCann, which is then why we then see him trying to rape Lulu. He was driven away from his boyhood sexuality and was pushed into an adult relationship.

Overall I thought that The Birthday Party was a very well set up play, the visuals were good and the costumes played well to their role. I thought the characters were very professional in their acting and played very well to their roles. The only blemish on it was the ruling out of the Pinter Pause, which was one of the reasons the creator of the play became famous in the first place! Other than that I found the play to be very enjoyable I would recommend this play to anyone who wants to go and see a funny play that takes a few steps outside of peoples comfort zones.

‘The Birthday Party’ by Harold Pinter. (2016, Jul 07). Retrieved from https://studymoose.com/the-birthday-party-by-harold-pinter-essay 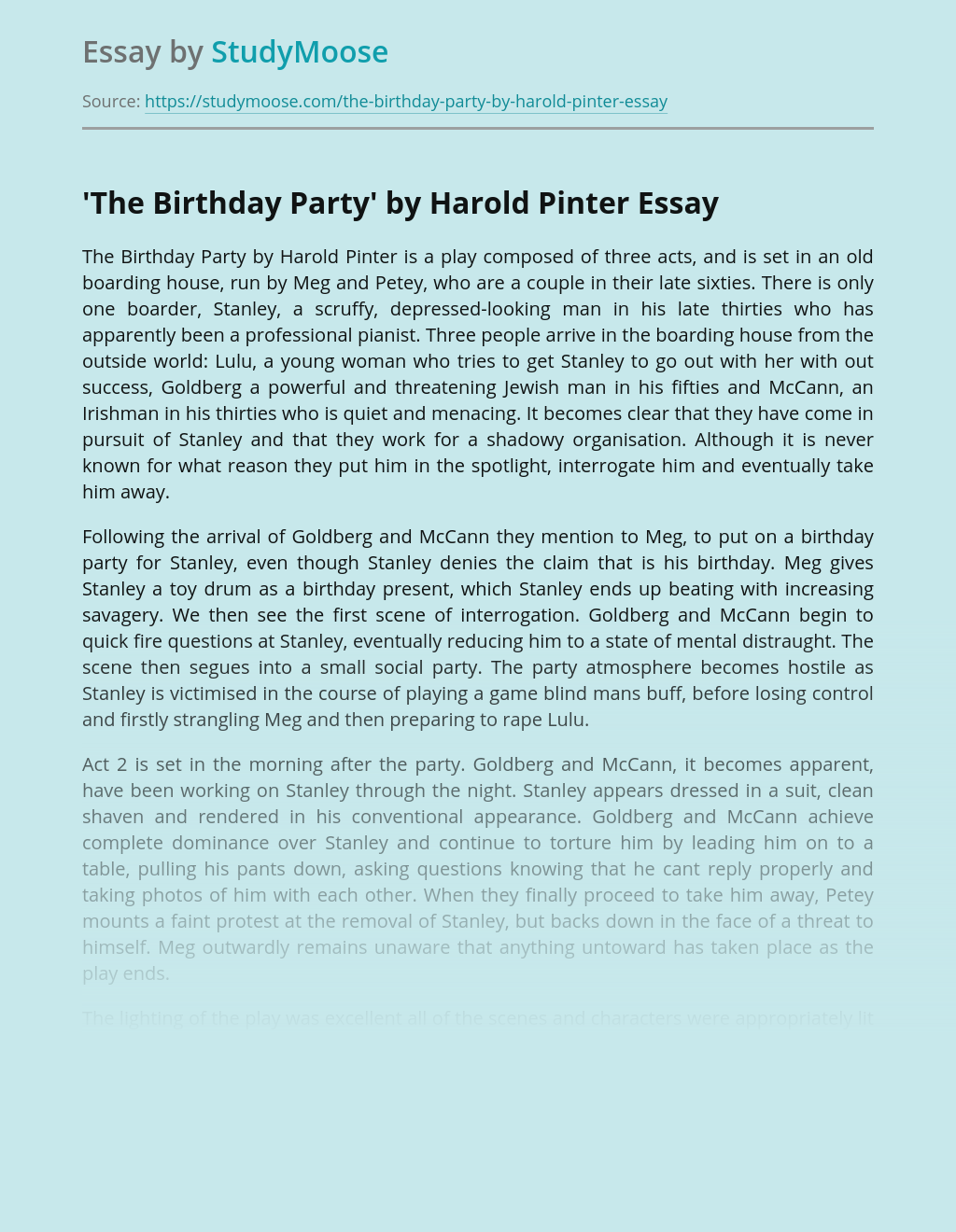 Plato, Descartes, and The Matrix

The Matrix movie had many similarities with the readings from Plato and Descartes. All three discussed the scenario in which reality was discovered to be a non-reality. Specifically, in The Matrix, reality that was experienced by multitudes of people is actually a computer simulation called “The Matrix”. This is actually a deviation from the Plato...

Orchid Partners is a Venture Capital firm being founded by give general partners Todd Krasnow, Susan Pravda, David Friend, Bill Nelson and Jeff Flowers – who have known each other for many years in various professional and personal capacities. All four partners are driven and committed to this venture and bring the strength of prior experience...