There is a certain calm to be felt when in the presence of a monument of historical significance. It is as though the statue presides over the area, regulating the atmosphere and affecting those around it. In the essay “Monuments to Our Better Nature,” Michael Byers addresses the issue that Americans are a part of their history. Byers recalls his experience as a child visiting the National Museum of Natural History and the National Mall with his mother. It was at this time that Byers found a sense of appreciation for the distance between monuments and the undeniable truths they hold, saying “…it was an idea she wanted me to appreciate, too.

Don't use plagiarized sources. Get your custom essay on
“ The Beauty of the Administration Lawn on the University of Idaho Grounds and Its Memorial Statue ”
Get custom paper
NEW! smart matching with writer

”(79), which solidifies his thought because it was something that was important to his mother as well. He describes the various monuments of the National Mall and the history that took place there. Byers’ doesn’t understand how a person can be an American and not feel the internal connection to the history that the monuments reflect.

From my observation I can agree with Byers that each person should have a natural association to our history through these monuments, but I believe people don’t often stop to think of the affect these historical figures have on themselves. I believe that historical monuments have a silent bond with each citizen, even if we don’t necessarily understand the significance of the monument or comprehend its relevance on a local or national level.

A college town has the advantage of experiencing an influx of new students every fall that liven the community.

Campus is filled with students scattered about, studying or visiting with one another. The Administration lawn on the University of Idaho campus is one such place; a relaxing and quiet area where students can go to study, socialize, or even think about whatever is on their mind. A cool fall breeze and the rustling of leaves are the most audible sounds, next to an occasional laugh as students walk across the lawn. The deep red and golden yellow leaves rush across the ground and crackle when they cross each other’s paths. The scent of fresh air is overwhelming and the calmness radiates throughout the expanse of trees. Vehicles drive by every now and then, and people stroll together and temporarily break the silence that has become almost sacred to the area. It almost seems to make me angry, that someone could disturb the serenity without the concern for others. So many things are taking place, but nothing is hectic or fast-paced, everything is in a leisurely state of motion. Byers would say “Americans are not known for good behavior in public, but here we become subdued, reflective.”(80). This is because even people who are just passing through realize this is a place to be respectful, and quickly change their tone. Yet no one notices the centerpiece, located in an opening of the trees where the space in the canvas above allows sunlight to fall down on the face of a statue.

The statue stands a top three base layers of rock which hold a smooth stone pedestal. The statue of a man stands upon this rock, a painted green stone that blends with the surrounding grasses. The statue depicts a man holding his rifle with the butt-end resting on the ground as he leans on a small tree stump. He wears a military uniform, with a strap of ammunition wrapped across his chest and a flat-billed ranger hat to protect his face from the sun. The statue faces directly to the opening, and the man looks straight ahead with a bold and stern face. There is no description on the statue, no words to display its meaning or its relevance. The statue is to commemorate those who served in the Spanish-American war, although I doubt that many people know this and may take the statue for granted.

It is ironic in a sense that this war memorial statue, dedicated to those who served during the ringing of gunfire, thundering of mortar strikes, and deafening bellows of cannon shells can bring a tranquility and peacefulness to its surroundings. It is as though the statue is some sort of guardian, silently preventing negativity and animosity without people even realizing it. Even to those people that walk by the statue and don’t understand its importance, still they feel the calm and are affected by its presence. To students of the University of Idaho, they feel the connection to the alumni that served in this war and fought for their freedom, people no different than themselves that gave their lives to defend our country and set the standard to make a difference. The feeling these people feel is just what Byers says in his essay, “…I have history entrusted to me, we are all in this together—”(82). It is the feeling of pride you have as an American, that not necessarily you, but your people were a part of a great movement that shaped history into what it is today. This feeling radiates to all who are in its shadow, and even without a description or commemoration on the statue we can know that this symbolizes something great that we did as a nation, and it is my duty to honor that accomplishment and continue the tradition to my fellow man.

The sun has lowered and its rays are no longer shining through the opening in the canopy above. The wall of trees increases the oncoming darkness, and the foot traffic is winding down on the sidewalks of the administration lawn. A couple gets up from their resting spot on the lawn, gathers their things, and heads off together towards home. An artist that had been painting the scenery packs up her tools and will have to finish another day. As I sit alone in the shadow of the trees, I see this place in its entirety, from the trees to the statue to the leaves on the sidewalks. Byers and I share a common thought, “How could anyone not grasp that these truths were, in so many cases, utterly beautiful?”(79). The beauty of these truths is more than just what we can see, but what it makes us feel inside. The truths manifest themselves into these various feelings that relate to a personal connection to the monument. To those who view the National Mall alongside Byers, the monuments produce feelings of optimism, that if past actions are the history of today then my actions will forge the history of tomorrow. To those who view the Administration lawn and the Spanish-American memorial statue, it brings a sense of pride, that I stand where so many have who went on to give their lives to protect my freedoms, and there is no better tribute than to follow their example and continue their memory throughout time.

The Beauty of the Administration Lawn on the University of Idaho Grounds and Its Memorial Statue. (2021, Sep 12). Retrieved from https://studymoose.com/the-beauty-of-the-administration-lawn-on-the-university-of-idaho-grounds-and-its-memorial-statue-essay 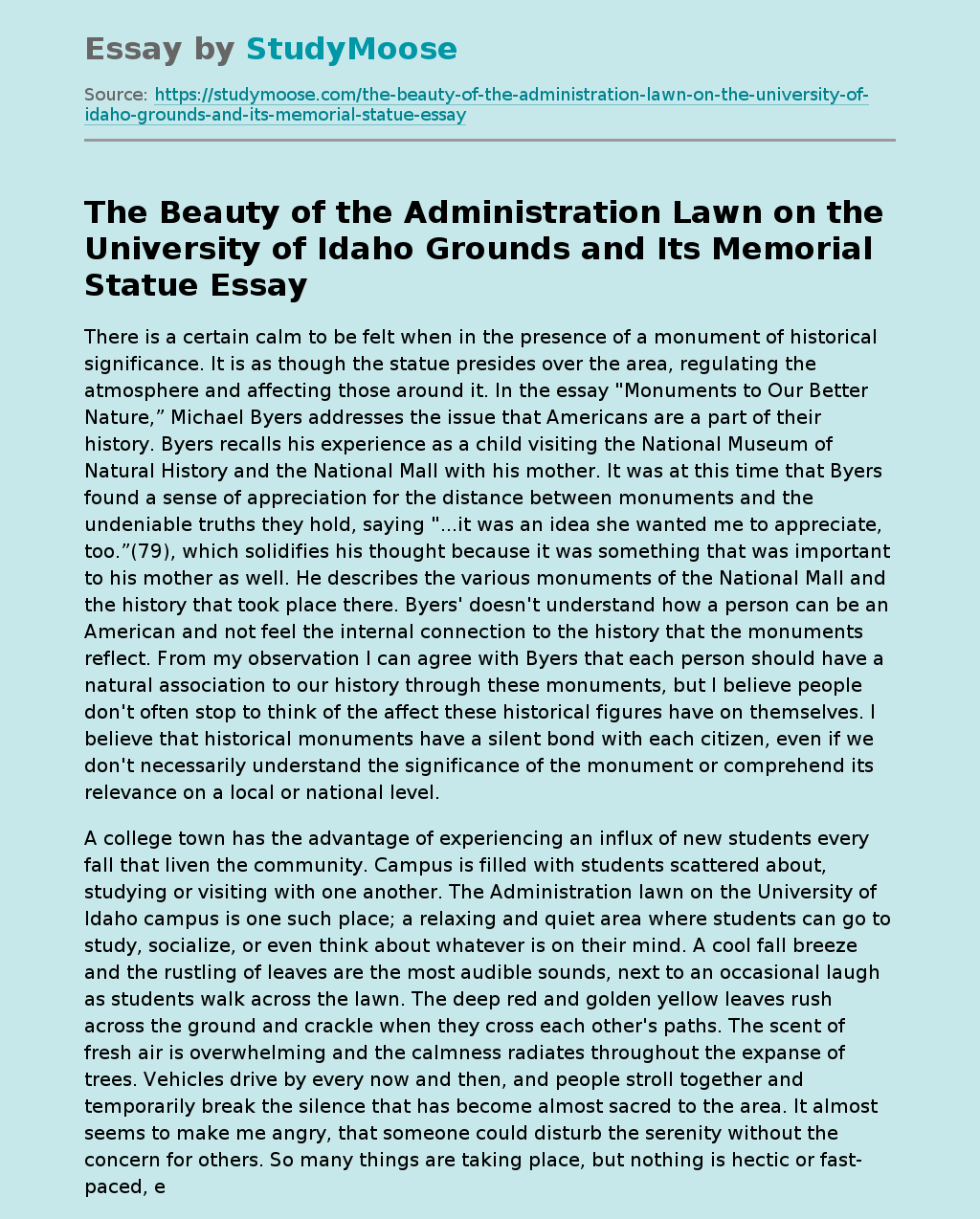