The Balance of Power during the Cold War

The concept of ‘balance of power is an important consideration in the analysis of the cold war which in theory was successful in avoiding any global conflict during the years 1945-1989. It was an ideologically based concept; communism versus democracy, USSR and its allies versus USA and its allies. Balance of power speaks to a situation in which peace is ensured by maintaining equilibrium of alliances between major powers. This equilibrium places checks and balances on any move towards hegemony, the political domination of one state over another.

Don't use plagiarized sources.
Get Your Custom Essay on The Balance of Power during the Cold War Just from $13,9/Page

Military alliance is characterized as an alliance of nations based on the belief that security is best maintained by a balance of power.

For example the North Atlantic Treaty Organization (NATO) was introduced as a result of the Czechoslovakian Coup and the Berlin blockade. It was created because the United States feared that without a strong military defensive system, Western Europe was threatened by Soviet expansion NATO was a regional military alliance. It agreed that an act against one member would be interpreted as an attack against all. Alternatively the Warsaw Pact was a defensive military regional alliance of eastern European countries (East Germany, Bulgaria, Romania, Albania and Czechoslovakia) headed by the U.S.S.R.

It was created to try to maintain a bipolar balance of power between communist and democratic countries. During the Berlin blockade in 1958 both N.A.T.O. and the Warsaw Pact took a stand. There were tensions between east and West Berlin. West Germany was thriving economically and a member of N.A.T.O. East Germany was economically and politically repressed. In 1958 two million Germans fled to the west. The east and West Germany border was sealed but not West Berlin. President Khrushchev demanded the western powers occupying Berlin to evacuate within six months. N.A.T.O. refused to budge and in March of 59 Khrushchev had to back down. Thus West Berlin remained free of communism.

Territorial (sphere of influence) is defined as the extent to which a nation state exerts its power beyond its borders. In 1962 tensions shifted from Europe to Cuba .Khrushchev thus decided to gain the advantage of the East- West balance of power and the upper hand in Berlin negotiations and decided he would install missiles in Cuba. Thus occupying a strong position in the American sphere of influence and negotiate more effectively the removal of western powers from soviet spheres of influence in Berlin. In October of 1962 an American spy plane photographed installations in Cuba that were designed to house nuclear missiles. It was clear that the Soviet Union was planning to use the missile bases in Cuba to threaten the United States.

John f Kennedy the president of the United States, decided to take strong action to stop the deployment of Soviet missiles in Cuba. The American navy guaranteed the island and announced that it would prevent the transport of any nuclear missiles to Cuba. Kennedy further threatened that those soviet missiles in Cuba would be seen as an act of war by the United States. This was a prime example of the term brinkmanship which is defined as the strategy of taking a nation to the brink of war in pursuit of foreign policy goals. It is a policy of threatening large scale or total war to force an opponent to back down in confrontation. The world watched in horror as the leaders continued to threaten one another. Soviet and American forces came very close to a clash. Khrushchev finally relented, and global nuclear war was averted.

The soviets agreed not to place nuclear weapons in Cuba. The Cuban missile crisis had another paradox which was peace through strength or the deterrence argued that maintaing this balance of nuclear forces was actually keeping peace, since no national leader wanted the global destruction that nuclear war would bring. The world has never come any closer to nuclear holocaust then during the Cuban Missile Crisis, but in a paradoxical way the crisis marked the beginning of the end of both the nuclear arms race and the cold war. Leaders and citizens in all nations began to realize the futility of continuing such clashes whose only outcome would be a form of formal suicide.

The key aspect of the military capability is to prevent first strike capability. American and soviet leaders gradually acknowledged this last argument of military capability. Although they were afraid of allowing their opponent to gain any advantage, negotiators from each nation began to discuss means of limiting growth of nuclear weapons and reducing their stockpiles of nuclear missiles. This was the beginning of détente, or an easing of tensions between the superpowers. Since neither could actually use their nuclear weapons; the two nations might as well stop confrontation and get along. Ideological differences and mutual suspicion however made this a slow process. Each nation suspected the other of using the negotiations to attain nuclear superiority. The Strategic Arms Limitation Talks resulted in salt 1 in 1972 and salt 2 in 1979. These agreements limited the building of new types of missiles but did nothing to reduce the number of nuclear weapons.

Although not officially ratified by the U.S. senate because of the soviet invasion of Afghanistan both nations lived up to the terms of the treaty. The early eighties brought a brief return to cold war tensions with us president Reagan proposing the strategic defense initiative which involved the use of satellites and lasers to destroy incoming missiles. Star wars never went beyond the experimental stage because in 1985 present Gorbachev the new soviet leader brought with him a return to détente and prop sepals for wide spread reductions and nuclear arsenals . In 1987 the intermediate nuclear forces (INF) reduced the number of nuclear weapons and banned an entire class of missiles.

The INF treaty got rid of all intermediate range missiles and for the first time both sides agreed to a system of verification were each side could inspect nuclear sites in the other nation to ensure that the treaty was being fulfilled. Therefore the INF treaty marked the start of a new period of cooperation which has continued to present day. The balance of power attempts helped to preserve peace in the world. A breakdown in the military capability could have lead to a destructive war.

In conclusion, a circumstance or distribution of power amongst states so that no one state is in a position to effectively violate the sovereignty ,independence (territorial integrity)of other countries is outlined as the balance of power. The principle has successfully prevented a major global conflict. It effectively deters the major powers of the U.S. and the U.S.S.R. from initiating war. A nation state will not initiate aggression if it is convinced that the costs of an action (militarily, the destructive consequences of conflict) outweigh the benefits of achieving the desired national goal. The balance of power was achieved through military alliances, territorial (spheres of influence) and military capability. Although peace was achieved during the cold war period regional conflicts occurred which at times created global tension and instability.

The Balance of Power during the Cold War. (2016, Jul 18). Retrieved from https://studymoose.com/the-balance-of-power-during-the-cold-war-essay 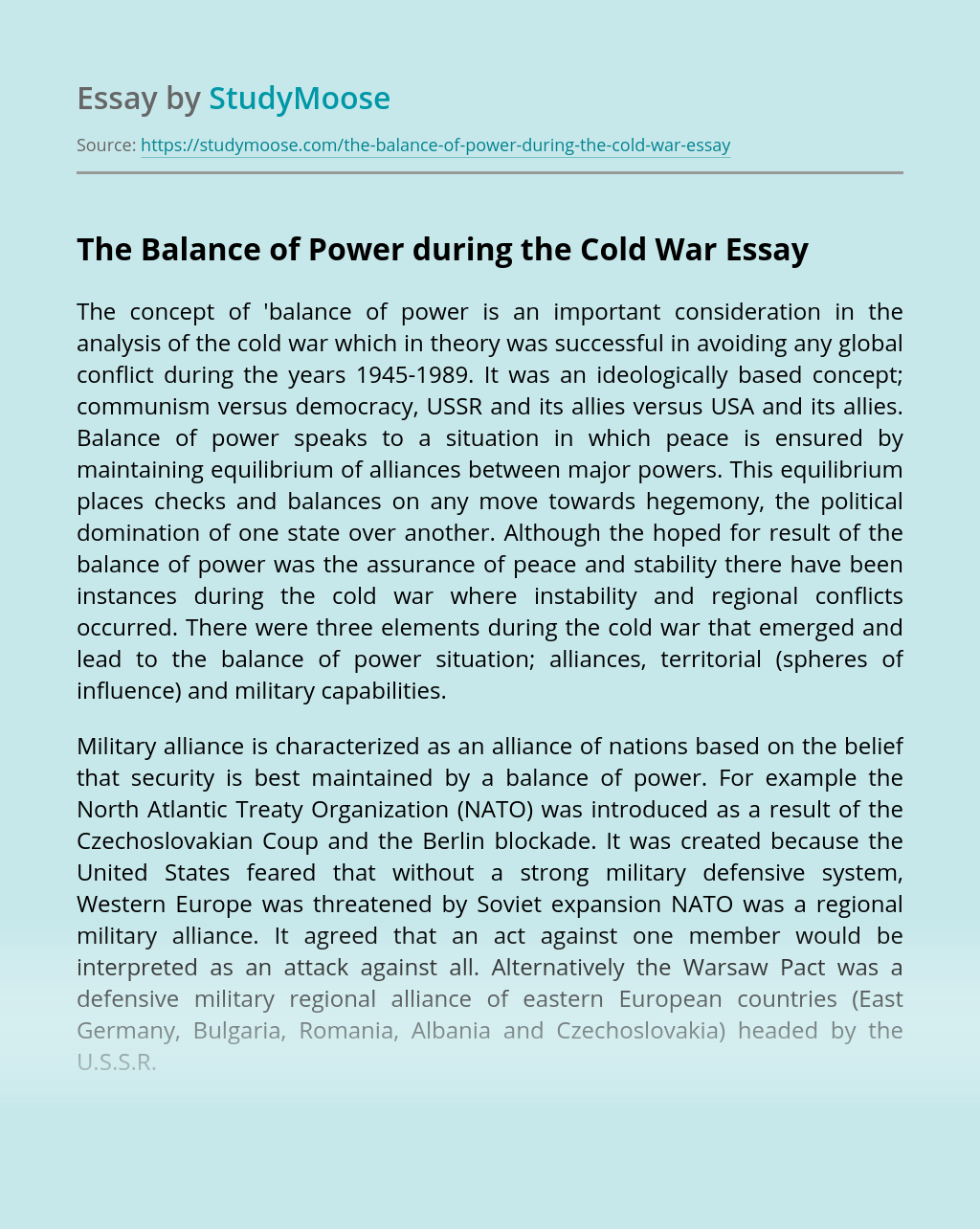 Thirdly, Specific vs. Diffuse. This is about showing emotions not, what we feel. Some cultures prefer to stick to the facts of a situation and not to enter into close relationships, while others want to get to know people better before doing any business. Fons Trompenaars (2003) Fourthly, Neutrality vs. Affectivity dimension questions about the...

You have no choice about which culture programs you from birth. So don’t judge others because of their cultural differences from you. All complex societies (such as our own) contain subcultures that share the larger cultural outlook, but have significant differences. The culturally savvy Soldier will take an active interest in any culture he or...

Behind a great son is a great mother. Where would the eminent St. Augustine be without his affectionate mother, Monica? Women of noble virtues are revered and uphold by the Catholic Church as saints. One such example is Monica, famously known as St. Monica. She is regarded as a woman of worth; a woman of...

Organisations need to collect data in order to comply with regulations such as minimum wage, working time directive, health and safety and even health and safety. 2) Keeping training and performance records on employees enables management to assess individual productivity and performance and allows them to help the employee reach there full potential and in...