1.What features make The Awakening a “local color” story? 2.What customs and beliefs of Edna Pontellier’s society are significant in relation to her psychological development? 3.What attitudes and tendencies in the Creole characters does Edna have trouble adjusting to? 4.Why did Edna marry Leonce? Is he the model husband?

5.What incidents in the novel reveal that he may not be a good husband for Edna? 6.How do Mlle. Reisz and Mme. Ratignolle function in relation to Edna and the novel’s view of women as mothers and artists? 7.

Don't use plagiarized sources. Get your custom essay on
“ The Awakening ”
Get custom paper
NEW! smart matching with writer

8.How are the background characters such as the young lovers and the lady in black at the shore, significant in Edna’s story? 9.In detail, explain how the flashbacks to Edna’s past function. How does her father compare to the other men in her life? 10.How does the view of romantic love develop in the course of the novel? What is the doctor’s view of marriage and childbearing? 11.

Can you think of an emotional attachment and/or a romantic obsession you have studied in a previous work? How does that incident or character compare with Edna’s emotional and romantic relationships? 12.What are the main images and symbols in the novel?

13.Why does Edna get involved with Alcee Arobin? 14.Why do you suppose critics were outraged at this novel in 1899, saying it committed “unutterable crimes against polite society” and should be labeled “poison” to protect “moral babes”? 15.What is your reaction to the end of the novel? Do you agree or disagree with the reasons for Edna’s final action?

1.The Awakening was written in the 1800’s. At this time, women did not have many rights. Their duties were to take care of the house and family. They had no say or right to speak their emotions or opinions. They also could not express themselves freely. The Awakening is an example of “local color” because it exemplifies this type of living through the protagonist. Edna Potellier is a woman who wants desperately to show her talents and feelings to the world, but can’t due to the fact of society’s expectations for women. She goes through a life struggle as any woman would during that time. The novel uses relatable events to the time period in which is was written, making it perfect “local color” material.

2.The typical New Orleans woman in this time period is expected to let their life revolve around their husband and children. They are expected to spend their time doing their domestic duties, such as cooking, cleaning, and taking care of the children. Edna is forced to live in these confines, making her very upset. She feels trapped in this way of life she is forced to live. She wants so badly to get out and show the world her feelings and opinions, but she cannot.

3.In the Creole society, women are free to express themselves however they want. They also have the right to say what they like and speak there minds. This is hard for Edna to adjust to because in her community, she is not allowed to do that. The Creole women have a lot more freedom of speech and thought then Edna is used to.

4.Edna married Leonce because she loved his devotion. He was the only one that seemed to pay attention to her, which made her fancy him even more. She also wanted to defy her father and sister in the mean time.

5.Edna fully believes in the way of life for the Creole women. However, her husband unwilling to listen to her thoughts or hear and understand what she has to say, therefore making him a less perfect husband. The point of a husband is to be there for his wife and to love and honor, which he did not do.

6.Mademoiselle Reisz is an unmarried artist and represents freedom for Edna because of the way she lives her life. She tells Edna that if she wants to become independent then she must be brave because artists are brave and defiant people. When Madenioselle plays the piano, it gives Edna a sense of defiance and freedom, giving her the courage to paint like she never has before. Madame Ratignolle represents the ideal New Orleans/Creole woman and contrasts with Mademoiselle Reisz. She is allowed to express herself; she does not have to go against her society and family to do so. This shows Edna that the way she is living is not fair.

The Awakening. (2016, Sep 08). Retrieved from http://studymoose.com/the-awakening-essay 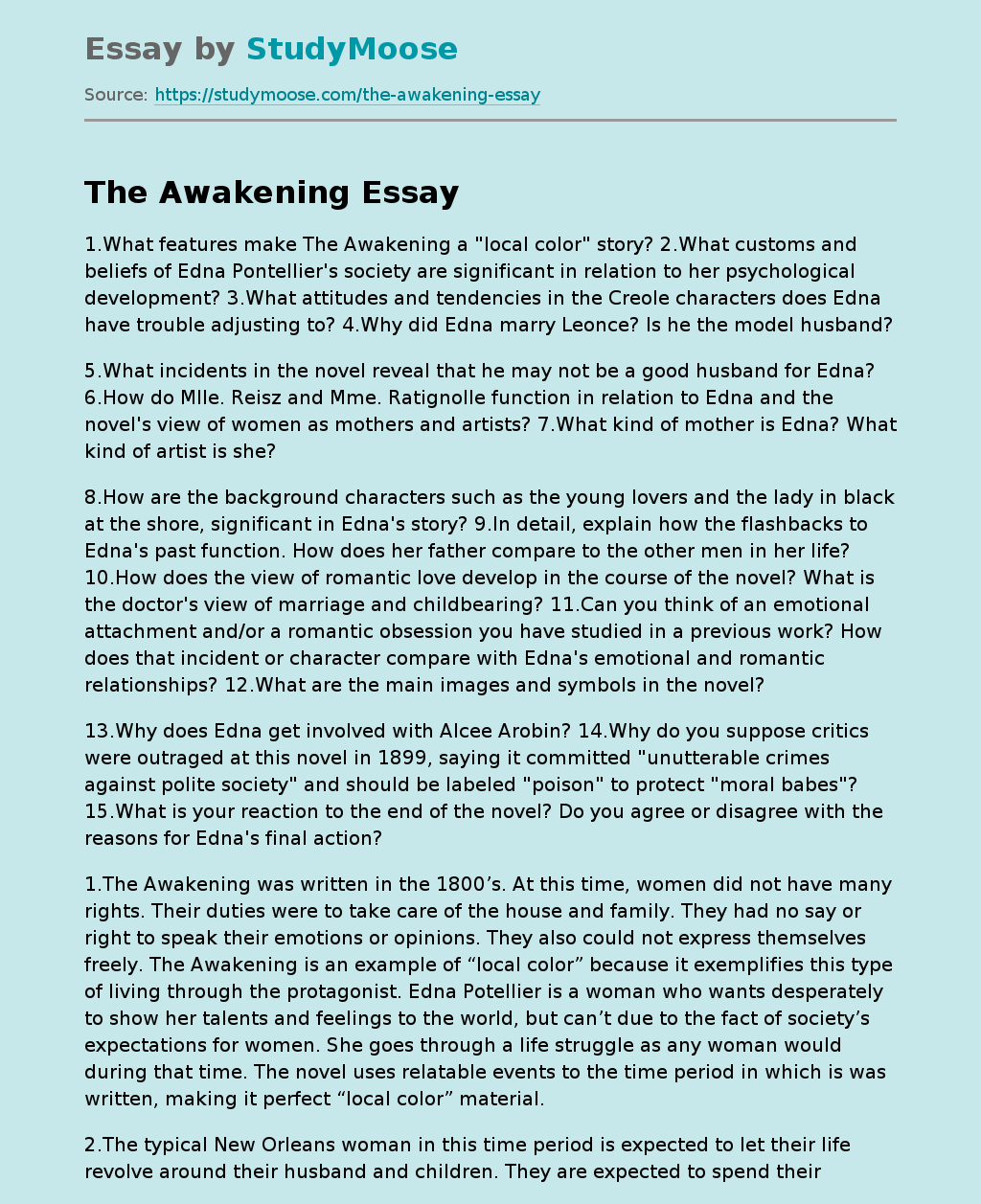