By looking into the different outcomes for two teams, I answered question from four aspects and made recommendations on each aspect for what we can do when leading a team. Analysis and Recommendations

When Coach P. formed two groups, each member accepted individual analysis from skills to strength. Eight best were put in Varsity team and eight worst in JV. Coach P. didn’t set specified goal for both teams. Different from JV who could easily find target like skill improvement, team performance, Varsity, which already had eight best athletes, automatically standing on high start-line, having more difficult on setting specific target by themselves.

Don't use plagiarized sources. Get your custom essay on
“ The army crew team ”
Get custom paper
NEW! smart matching with writer

Their target was vague – since their victory was merited, waiting for coach to set a goal might be what they were thinking. Therefore, when JV team beat V team, it was unexpected for V team and blaming each other is a normal reaction for such situation. When failure came again, the trust in V team crashed.

A clear task can help a group quickly into work state, find the most effective way for communication and build up trust. Although for some group, it’s better for members to find their task by themselves, it’s not guaranteed. My recommendation is providing helpful information for a group setting a goal, monitoring the process and offering help when necessary, especially for a new group.

As time passed, a culture “nothing to loss” formed within JV. This culture brought a positive attitude toward mistake made in competition.

Meanwhile, no opening talks in Varsity. Poking others’ fault was culture for V team. Members relied on coach to coordinate conflict and Coach P. realized nothing about this serious problem until nearly before championship. Group culture can bring cohesion or problems, and it is difficult to change after a culture is formed. When leading a team, my recommendation is that, as a leader, one should involve into group culture, being a part of it. If any improper phenomenon appears, fix it immediately.

There is no burden for JV competing with Varsity because they are not the best. During the competition, JV use Varsity as a benchmark to gauge their rowing. They had something to learn from each game and provide feedback in a nice way. On the contract, Victory had no benefits from competition, since there is nothing to proud even though rowing faster than JV; feedback within Varsity was the worst part – delivered to coach’s mailbox. Competition within two groups is not a good idea because it only benefited JV. I recommend leaders carefully consider measurement of outcome. Outcomes should be connected with targets. It should be a benchmark for distance that we are away from our targets and feedback should based on mutual performance toward target in a nice and impersonal way.

In this case, Coach P. as a leader didn’t play his role well. He paid more attention on individual performance over team performance, putting V team on a higher and difficult position without additional guidance. Although trust is an important element in this sport, he did nothing for teamwork. He even caused a rift in between and made situation worse. Each leader has different leadership style, someone prefer “management by committee” while the other prefer to decide alone. Whatever style you are, my suggestion is to consider needs for the group according to tasks. Conclusion

After analyzing this case, it is evident that even a collection of talent member may not be a best team. Thus, as a student, I believe my recommendations can help build leadership in my careers. 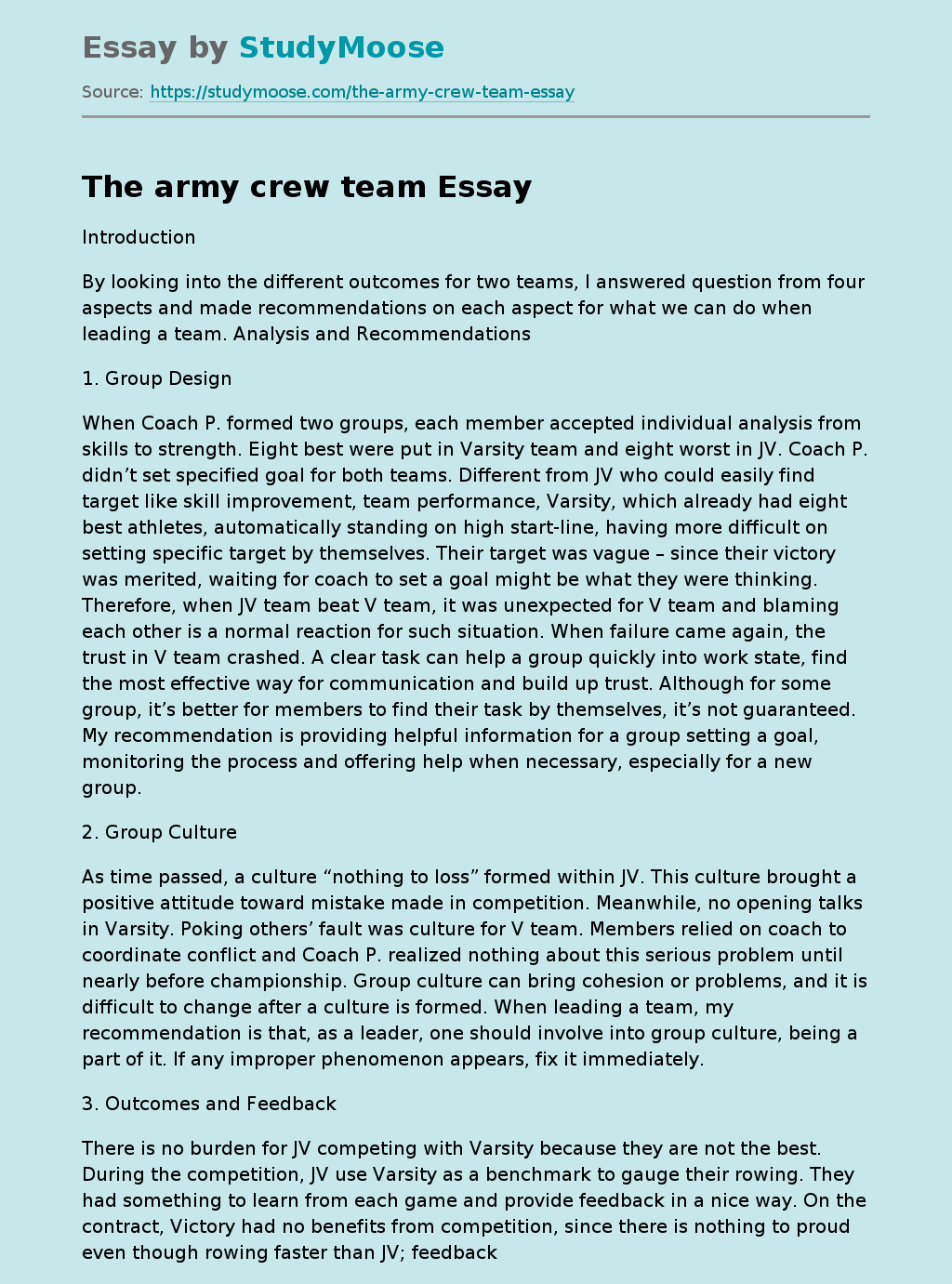