Q 1. Why does the Varsity team lose to the JV Team?

Because a crucial element in the sport of rowing is the performance of the team as a whole, there must be a high level of trust and confidence among the team members in order to enhanced personal and group confidence. A tremendous amount of harmonized collaboration of individual efforts is required to reach synchronization in rowing. Therefore, winning teams are those that are the most synchronized, exhibiting exemplary collaboration among their rowers.

Don't use plagiarized sources. Get your custom essay on
“ The Army Crew Team Case Analysis ”
Get custom paper
NEW! smart matching with writer

The Varsity boat consistently loses to JV because its members don’t work together as a team. Coach P did not sufficiently facilitate the kind of team building necessary for success: discussing team goals, establishing a sense of trust or leadership, and recognizing the potential for disruptive behavior and conflict.

According to the Five-Stage Team Development Model, groups develop into effective teams through a sequence of stages: forming, storming, norming, performing, and adjourning. Applying this model to the progress of the Army crew boats makes clear that while the Varsity team is still storming and has yet to create structure or norms, the JV team demonstrates the clear communication and mature problem solving associated with a team in the performing stage.

Contrary to expectations, JV members would rather remain with their teammates than be promoted to the Varsity boat; evidence of a truly cohesive team.

The Varsity boat is suffering from internal and external attribution problems and members blame themselves and others for the team’s poor performance.

Some expressed resentment towards the coach for making them compete against the JV boat while others blamed the river on which they practiced. The negative attitude of the Varsity team members is evidenced by accusatory emails and behavior during team meetings. Analysis of the Varsity team indicates that none of its members possessed leadership abilities; instead, they accused each other for the team’s failure. It is evident that while monitoring the performance of the two teams Coach P should have intervened earlier to improve the group dynamics.

Q2. What should Coach P. have done differently earlier in the season to resolve this problem?

The Army Varsity Crew is a dysfunctional group. We can see that they are stuck in the Storming phase of team development. That is, they’ve not yet reached the Norming phase where trust among the members has largely been achieved. The coach’s efforts to identify the weak link do nothing to for the destructive conflict brewing in the group. As conflict causes personal frustration and loss of efficiency – as demonstrated by Army crew — some researchers suggest counseling or simply “listening with understanding.” Letting a person vent his or her feelings may relieve the frustration and help to promote problem-solving. Unfortunately the problem with the Varsity team was confronted too late to be solved before Nationals.

From the very beginning, Coach P did not address the concept of team building. His focus was in identifying the best eight instead of creating the best 16. This delineation between the Varsity and JV boats created the environment that caused the conflict. Instead of the focus on the individuals and the individual Varsity/ JV groups, he would have been better served to provide the environment that would sustain a complete team effort. In separating the “Varsity” and the “Junior Varsity” he planted the seed of separation between individuals identifying themselves as “Good Athletes” or the “Less Good Athletes”. This turned out to be a destructive concept for the entire team. In developing the Army Crew, Coach P could have abandoned the labels of “Varsity” and “Junior Varsity” in favor of labels that would characterize either team as the “Good Athletes”. A team building event could have included all crew members at any time during the season, where the “best” rowers are those that row best together.

The JV team clearly developed a “team” focus. In all of the interactions between each other there was never a question about the abilities of any other rower, but only the positive view of the entire team as a whole. JV developed a companionship and believed at a very fundamental level that each member was equally important and talented. This attitude was articulated by the JV maxim, “We will succeed together, we will fail together”. This clearly indicated that the “whole” was greater than the sum of its “parts”.

The Varsity team did not develop this “team” focus but continued to critique individual efforts, never once attributing success or failure to the entire team. Coach P had several opportunities to counter this during the Atlanta Retreat by focusing more on the entire team’s successes and that all team members contributed to whatever outcome was realized. He should have appointed a captain instead of placing all leadership on himself. The continual focus on individual strengths and techniques severely weakened the dependence and trust Varsity members felt for each other.

Q3. What action do you recommend for Coach P. and why?

We recommend that the JV boat be selected to compete at Nationals. The JV boat has done a better job of working together as a team and is currently the best performing boat. Although it is possible that Varsity can improve their teamwork in the future, the fact that Coach P, an experienced ‘master’ level coach, has already tried to reach the Varsity team on a psychological level and failed makes it unlikely that he will be able to achieve the necessary results in the four days available. Rearranging the crew members on the boats is also not a viable choice in the time frame given the JV members’ unwillingness to adjourn from their team and the risk involved with trying to form a functional new team in four days. By promoting the JV team to Varsity, Coach P can tap into the established high performing team psychology and spend the next four days fine-tuning their performance. This will put Junior Varsity in the optimal position to succeed at the championships. 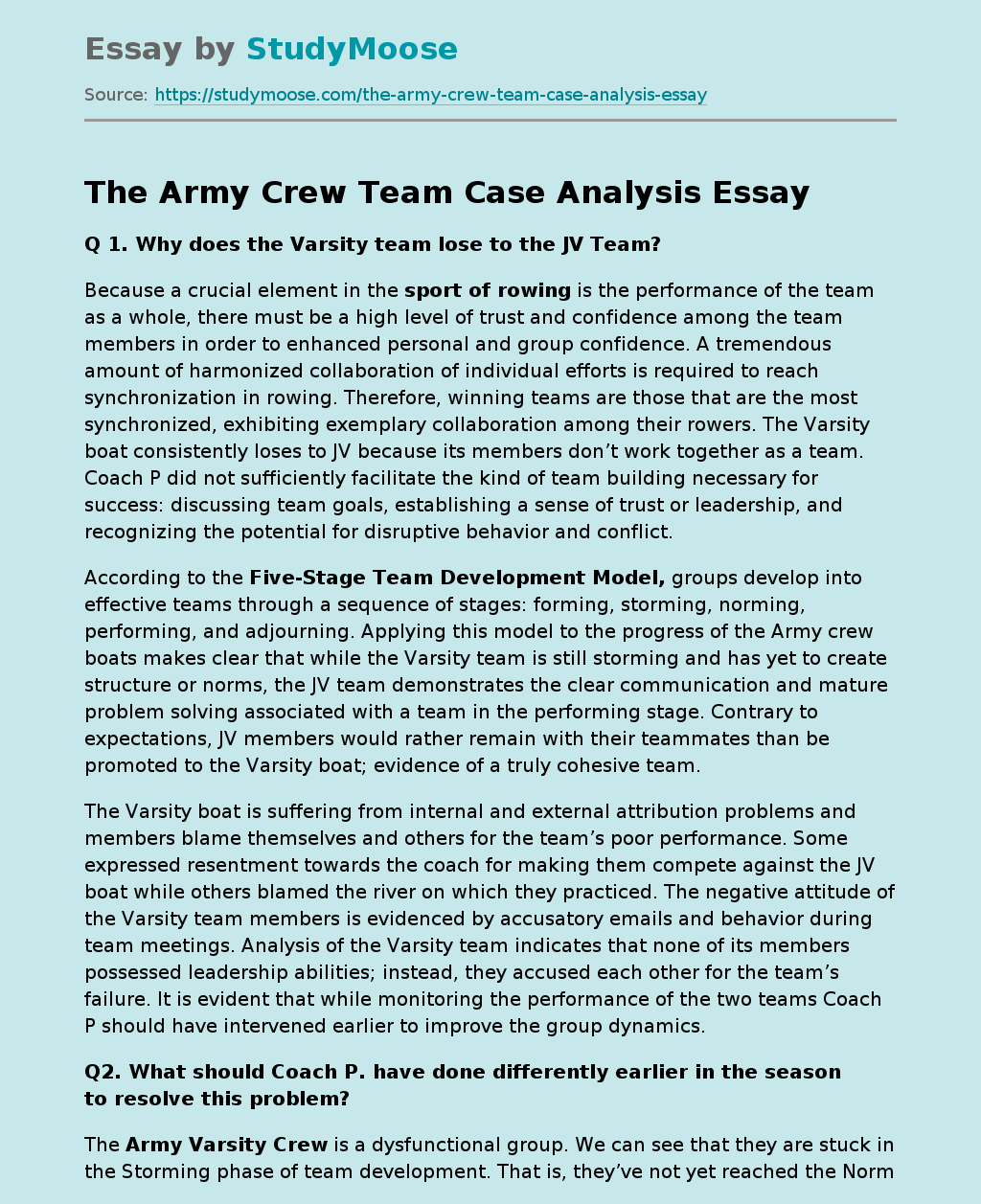