The apology is the most authentic account that has been preserved when Socrates defended himself in Athenian council. This was the one given dialogue in Xenophon’s memorabilia. The apology ” apologia” means to defend yourself in a trail. This was written according to what Plato’s remembered on the actual trial. But this seems bias because Plato’s side is in the accused whom was Socrates. This shows as one sided point of view. The dialog contains different parts. First he introduced himself by a concerning manner.

Don't use plagiarized sources. Get your custom essay on
“ The Apology Summary ”
Get custom paper
NEW! smart matching with writer

His speech contains references about his daily life. After pronouncing the sentence of his penalty, Socrates made a prophetic rebuke by living at ease but in a very troubled conscience.

Socrates attempts’ to convince by innocence

At first Socrates attempts’ to convince by innocence. But his accusers warn the judge to their guard lest. And Socrates tells them that he will indeed speak the truth, and implores the judge not to be thinking of the manner of his speech but only of the justice of the cause for which he pleads.

In making his defense, Socrates will be replying to the two kinds of accusations. First is : Socrates is an evil-doer and a curios person, who searches into things under the earth and in the heaven and makes him worse appear the better cause and he teaches the aforesaid doctrines to others. But this accusation is based entirely in falsehoods, for he had no interest in the physical sciences and has never claimed to have any wisdom this matter.

And preferred to do with moral conduct and the welfare of the soul. About the later accusations defended like this: Socrates was amazed about Chaerephon inquired about the Oracle of Delphi that Socrates was indeed the wisest of all men of Athens .then he begins his series of investigations to proved the oracle. By this everyone begins to have him. Thus, Socrates is wiser than others because he is aware of his own ignorance. The second accusation Meletus has stated that Socrates is a doer of evil in that he corrupts the youth, does not believe in the gods of the state, but has introduced new divinities of his own. But Socrates questions Meletus as his defense, to state how is that he corrupted the youth, then Meletus replies that Socrates is an atheist in as much as he does not believe in the godhead of the sun or moon but teaches that the sun is a stone and the moon is an earth he believes anyone in his circumstance ought not to calculate the chance of living or dying instead he would choose death preference to disgrace, for it is better to die honorably thank is to live in dishonor.

Response to a command from God

Hence, he will live in response to a command from God to fulfill the philosopher’s missions and searching into himself and for others. By this Socrates spoke the following words:”men of Athens, I honor and love you but I shall obey God rather than you and while I have life and strength I shall never cease from the practice and teach of philosophy, exhorting anyone whom I meet and convince saying: men of Athens” for I do nothing to go about persuading you all, old And young, alike your properties but first and chiefly to care about the greatest improvement of the soul…my teaching and if this is the doctrine which corrupts the youth, my influence ruinous indeed…and either acquitters me or not; I shall never alter my way even to die many times.” And by this is aware of the fact that persons who have been accused of some crime will often try to win the sympathy for themselves.

Also when there is something wrong about petitioning a judge thus, procuring and acquittal instead of informing and convincing him it is the duty of a judge not to make a presence of justice but to give judgments, for he has sworn that he will judge according to the law and not according to his own good. After the vote had been taken, Socrates surprised that the size of the majority against him had not been larger than it was. But without the assistance of his accusers, the opposition would not have been amounted to more than a fifth of the votes, Socrates would have been acquitted. It was customary in Athens for a prisoner who has been condemned to death to have opportunities of proposing an alternative sentence, which would be accepted to majority of the judges.

The penalty might be changed to the payment of a sum of money, banishment from the city for the period of time, a number of things, which would be preferable to a death sentence. Socrates stated that he had no money that could pay a fine. Even though a number of friends supply him with whatever amount but Socrates refuses. Indeed he admitted guilt of something about he was entirely innocent. Neither was he willing to be exiled from the city in which he had always lived and were he had carried on his activities in obedience to a divine command. Socrates might escape the death penalty but he believes that the greatest good of a man is to converse about virtue daily; examining both himself and others, for the unexamined life is not worth living. He has one favor to ask for the judges after he is gone: that they will be watchful of his sons when they had grown to manhood and punished them if they seem to is about riches or anything more than virtue, if they pretend to be something they are not.

Having Socrates defense which concludes the final note of warning to those who condemned. The Truth is that putting Socrates to death; most important is not the avoidance of death but rather the avoidance of unrighteousness. This is what Socrates said: I would fain prophesy to you; for I am about to die, and that is the hour in which men are gifted with prophetic power, that immediately after my death punishment for heavier than you inflected will surely awaits you. For I say that there will be more accusers hitherto I have restraint; they are younger, they will be more severe and you will be more offended to them. The prophesy which I utter before my departure to the judge whom who have condemned me. 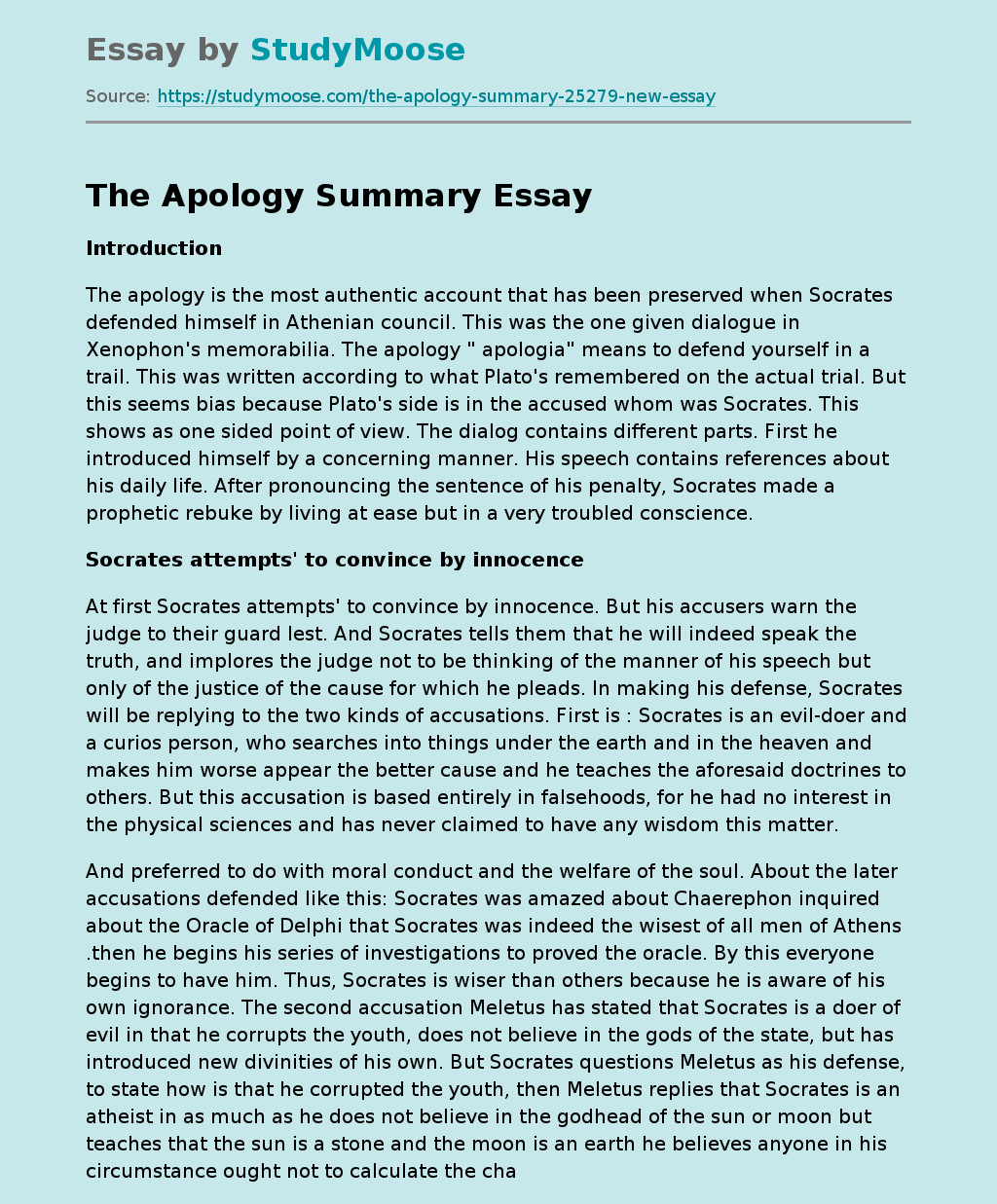