The Ancient Idea of Banqueting

The idea of banqueting is ancient (see Sellisternium, Belshazzar’s Feast, and Mead halls). In the 16th century, a banquet was very different from our modern perception and stems from the medieval ‘ceremony of the void’. After dinner, the guests would stand and drink sweet wine and spices while the table was cleared, or ‘voided’ (Later in the 17th century ‘void’ would be replaced with the French ‘dessert’). During the 16th century, guests would no longer stand in the great chamber whilst the table was cleared and the room prepared for entertainment, but would retire to the parlour or banqueting room.

Don't use plagiarized sources. Get your custom essay on
“ The Ancient Idea of Banqueting ”
Get custom paper
NEW! smart matching with writer

As the idea of banqueting developed, it could take place at any time during the day and have much more in common with the later practice of taking tea. Banqueting rooms varied greatly from house to house, but were generally on an intimate scale either in a garden room or inside such as the small banqueting turrets in Longleat House.

A banquet is a large meal or feast, complete with main courses and desserts. It usually serves a purpose such as a charitable gathering, a ceremony, or a celebration, and is often preceded or followed by speeches in honour of someone. Banquet is a large catering activity department where food & beverage are served for pre-arranged number of peoples on pre-fixed date & time agreed menu & price. (by F&B food Blog)

In ancient Egypt you are determined on how much you eat as where you are in society.

Rich egyptians usually held banquets. At Egyptian Banquets there are plenty of rich dishes. The meats what are served are, Beef, seldom, lamb, goat, pig, antelope, gazelle, hyenas, crocodile, hippo, geese, pigeons and fish. Salads, fruits and other dishes as well. Beer and wine is available to. Baklava, basbousa and bbouzat are 3 desserts. Entertainment is provided all through the night by jugglers, clowns, musicians and dancers. It is a night of fun for all! At a predetermined time during the festivities a slave would carry a model mummy into the banqueting room to remind the guests of their mortality.

Ancient Egyptians had no silverware so all food was eaten with their hands. Beer and wine were the customary drinks for people of all social classes. The poor typically ate unleavened bread, onions, and sometimes fish. Beer was the usual drink. Beef and other meats were seldom eaten, except at government –sponsored feasts. The wealthy enjoyed a more varied food selection. Wealthy Egyptians had over fifteen different types of breads. Some of the vegetables common to their diet were lentils, lettuce, peas, cucumbers, onions, and radishes. Sugar was not available in Egypt, but they did keep bees for honey to sweeten their foods. Meats from cattle, sheep, goats, and pigs were often served. The wealthy enjoyed dates, melons, grapes, pomegranates, and apricots, which were in good supply.

The rich often held banquets, where large amounts and a wide variety of foods were served. Wild game and fowl were hunted and served. Butter and cheese were also served at these banquets

Symposium is traditionally translated as “banquet” but more literally “gathering of drinkers” . The Greek symposium was a male aristocratic activity, a social gathering where men drank together, conversed, and enjoyed themselves in a relaxing atmosphere (metmuseum). It was a key Hellenic social institution. Most of the talk that happened in the symposium was about philosophical and political issues and sometimes poetry. They were also frequently held to celebrate the introduction of young men into aristocratic society.

The symposium began as a warrior feast. Prayers opened and closed the meetings and sessions sometimes ended with a procession in the streets.

It was broken up into two parts, the first included food and the second with drinking. The food in the first part was rather simple snack foods, basically used to help the second half last longer. The second part was inaugurated with a libation to the god Dionysus, the god of wine.

Symposia were also held by aristocrats to celebrate other special occasions, such as victories in athletics and poetic contests (britannica). Most of the drinking and discussion done in the symposia was done in a separate quarter called the Andron. The rooms were designed specifically for the proceedings. The participants, all male aristocrats, wore garlands and leaned on the left elbow on couches, and there was a large consumption of wine, served by slave boys. The symposium was comprised of about seven to fifteen couches with cushions, which fit one or two people to a couch, there were also low set tables.

The drink used for the event was drawn from a Krater, a large jar designed to be carried by two men used for mixing drinks. It was then distributed amoung the guests. The drink was three parts water and one part wine.

The feasts could only be afforded by the rich; in most Greek homes, religious feasts or family events were the occasion of more modest banquets. The banquet became the setting of a specific genre of literature, giving birth to Plato’s Symposium, Xenophon’s work of the same name, the Table Talk of Plutarch’s Moralia, and the Deipnosophists (Banquet of the Learned) of Athenaeu

Roman banquets have long been infamous in modern culture for their decadence, both in terms of the extravagant and exotic food and the entertainment, which would often include male and female dancers and musicians. By the height of the Roman Empire, banquets would be sumptuous affairs featuring food from all corners of the empire and beyond.

-The dining room was one of the most important reception spaces of the residence and, as such, it included high-quality decorative fixtures, such as floor mosaics, wall paintings, and stucco reliefs, as well as portable luxury objects, such as artworks (particularly sculptures) and furniture. Like the Greeks, the Romans reclined on couches while banqueting, although in the Roman context respectable women were permitted to join men in reclining. This practice set the convivium apart from the Greek symposium, or male aristocratic drinking party, at which female attendees were restricted to entertainers such as flute-girls and dancers as well as courtesans (heterae)

A dining room typically held three broad couches, each of which seated three individuals, thus allowing for a total of nine guests. This type of room is commonly described as a triclinium (literally, “three-couch room”), although dining rooms that could accommodate greater numbers of couches are archaeologically attested. In a triclinium, the couches were arranged along three walls of the room in a U-shape, at the center of which was placed a single table that was accessible to all of the diners. Couches were frequently made of wood, but there were also more opulent versions with fittings made of costly materials, such as ivory and bronze.

A proper Roman dinner included three courses: the hors d’oeuvres (gustatio), the main course (mensae primae), and the dessert (mensae secundae). The food and drink that was served was intended not only to satiate the guests but also to add an element of spectacle to the meal. Exotic produce, particularly those from wild animals, birds, and fish, were favored at elite dinner parties because of their rarity, difficulty of procurement, and consequent high cost, which reflected the host’s affluence. Popular but costly fare included pheasant, thrush (or other songbirds), raw oysters, lobster, shellfish, venison, wild boar, and peacock. Foods that were forbidden by sumptuary laws, such as fattened fowl and sow’s udders, were flagrantly consumed at the most exclusive feasts

THALIA was the goddess of festivity and rich, luxurious banquets. She was one of the three Kharites (Graces) who usually appears with her sisters dancing in a circle.

Thalia’s comes from the Greek word thalia, an adjectival term used to describe banquets as rich, plentiful, luxuriant and abundant. In this sense she was probably the same as Pandaisia (Banquet), a Kharis who accompanies Aphrodite in Athenian vase painting. Thalia’s name also means “the blooming” in the sense of springtime greenery and blossoms (cf. the Hora Thallo).

The Ancient Idea of Banqueting. (2016, Oct 13). Retrieved from https://studymoose.com/the-ancient-idea-of-banqueting-essay 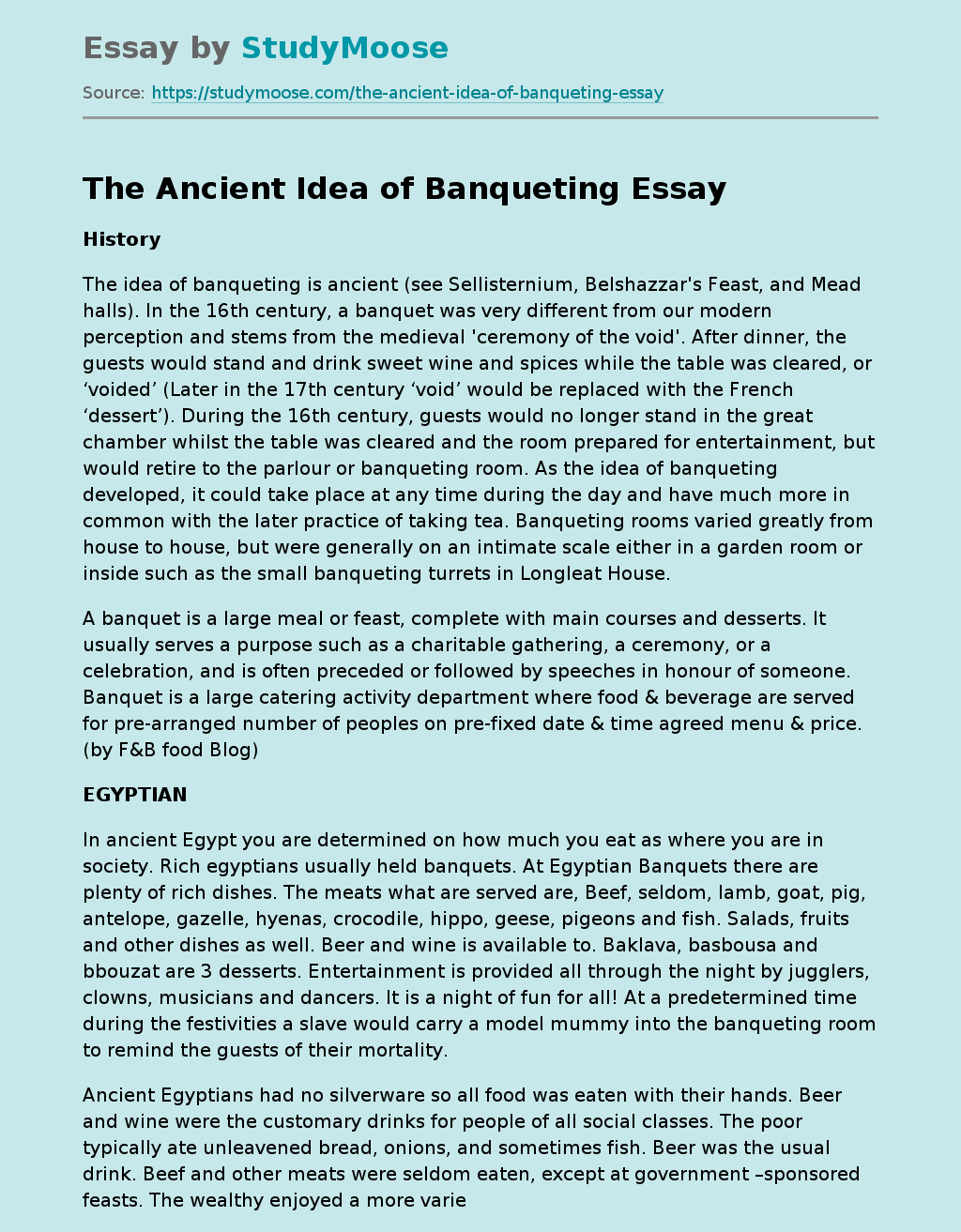