John Donne was to most, considered a metaphysical poet, or a poet who finds their inspiration on expressing the world not as it would be universally revealed but in the world as science and philosophy account it. The poem “The Apparition” lacks many of the general characteristics that distinguish metaphysical poetry but continues to be classified as a metaphysical representation (Norton, 1). “The Apparition” contains at least three transformations of feeling. The manifestation success of this relationship gives the speaker so much pleasure that he revokes the suggestion he suggested in the beginning, the idea of threatening his lover into more agreeable behavior because he believes he would enjoy her chastisement more than her reformation.

Don't use plagiarized sources. Get your custom essay on
“ The Anaylitical Approach to John Donne’s Poetry ”
Get custom paper
NEW! smart matching with writer

The speaker of the poem seems to feel that spite appears more reputable than vice. In this thinking the speaker seems to not only threaten her as she is awake but also in her sleep.

“The Apparition” announces the theme in the beginning, a theme that was very well-used at this time especially by Shakespeare, the death of an adoring man because of the malice of the woman he loves.

The speaker addresses his mistress as murderess, during the Elizabethan era when a poet is being killed or wounded, this usually means he has been rejected. “When by thy scorn, O murderess, I am dead” (Line 1). The speaker is accusing his lover that because of her disdain she has killed something inside of him. The speaker states that because she has rejected him, she believes herself to be free from all of his harsh words and begging.

” And that thou think’st thee free / From all solicitation from me” (2-3). This entails that because she has rejected him she believes he will not bother her again, and he is saying how wrong she is. The rejected and envious lover then promises that his ghost will haunt her when she is lying in bed with her other lover. “Then shall my ghost come to thy bed / And thee, feigned vestal, in worse arms shall see” (4-5). His ghost being the spirit of their relationship and the bitter rejection will come to her while she lies with her lover. The “feigned vestal” suggests a false pretender of some virginal dedication, she anticipates the elation to be free “From all solicitation from [him]” (3).

The “solicitation” of the speaker is as the poem implies, it is a specific request for sex. Since the mistress is described as a “feigned vestal,” which is her false virginity, implying that she is lying to him about reasons that she won’t sleep with him. The speaker then refers to her in bed with her other lover. ” Then thy sick taper will begin to wink” (6). In Elizabethan times it was commonly believed that candles burn dim in the presence of ghosts. This implies that his “spirit” is in her bed room where she has been spending time by candle light that is fading, by “sickly taper” or dying candle (FitzRoy-Dale, 1). The speaker then refers to her in bed with her other lover. ” And he, whose thou art then, being tired before, / Will, if thou stir, or pinch to wake him, think thou call’st for more” (7-9). Here the speaker is referring to the man that lies with his mistress, as a sort of threat, the speaker promises that when his ghost visits her bed room he will see her lover “tired”. Not only tired of being with her but also tired of listening to her.

That when she try to wake him, upon seeing his ghost, she will be so frightened and try to wake her new lover but he will ignore her thinking that she is just being a bother and assuming that she wants to make love again. Being left alone to deal with his ghost, the mistress will become panicked. “And in false sleep will from thee shrink, / And then, poor aspen wretch, neglected thou” (10-11). The false sleep alludes to her not opening her eyes in spite that she knows he is out there and even that sleep falls away and leaves her to his anger. The speaker elaborates by saying that she is a pale and frightened miserable woman (FitzRoy-Dale). Taking his threatening even further by making her as dejected as he.

“Bathed in a cold quicksilver sweat wilt lie, / A verier ghost that I” (12-13). This warning is that she will be transformed into a ghost by fear, just as he was by love and rejection. His wish for her is that she will begin to realize her thread of life is torn, loose, and irrelevant. Even though his ghostly condition is substantial, her ghost is more so. He has slipped out of time and become a shadow waiting for her spirit. He was neglected and his hope is for her to feel this pain.

The culminating point of the speaker’s resentment comes within the last four lines of the stanza, and this is where we see the true intentions of the speaker. “What I will say I will not tell thee now, / Lest that preserve thee…” (14-15). After calling his mistress a “poor aspen wretch” and a “feigned vestal”, he insists on saving the best for last. He would rather keep her in this transparent world and let her suffer what he will say. “…And since my love is spent” (15). This seems like a debatable statement, if his love is spent than why hold back words that may hurt the lost lover even more. For that matter why write about her at all since he has let it go? He claims he no longer loves her and therefore no longer desires her love. But because the threat is so vague, it suggests that his desperate desire could be to achieve the opposite of what he intended. “I’d rather thou should’st painfully repent / Than by my threat’nings rest still innocent” (16-17). He could hope to threaten the mistress into loving him

. By keeping harsher words from her and making her dwell on what he might have to say is how she “painfully repent[s]”. In other words, he states that, by revealing what he is going to say, he could persuade the mistress to see what she had lost and want it back, in order to remain innocent of his “murder” and avoid confronting his irritated ghost. The speaker reveals himself as a composedly cruel man who wishes to hurt her with the same harshness by which he had felt by rejection.

A main theme is the return of his ghost or spirit, and the pleasure it would bring him because it will be painful to his mistress. His loneliness in rejection will be a continuation of his illness in life as a rejected lover and therefore his sorrow will not amplify in spite of him returning as a ghost. This will be his only successful approach to his mistress’ bed. But she, who was once chaste and desired, will lie terrified, a used prostitute ignored by the other man. Stripped of her false pretenses, unloved, unwanted, and as lonely as him. So radically estranged and cut off from intimacy, he would slide into an apparition, out of touch with reality and abandoned inside of himself.

“The Apparition” develops at the events themselves. The poem expresses a thin thread of revulsion, sliding through seventeen lines without a period, a stanza break, any rhyme scheme, or pattern of feet per line. With an extraordinarily hollow security of intent, the poem strips away at the events themselves. No argument is developed, no story told, or no episode embellished with motives or recrimination. There is only her gesture of rejection and his narrow, oblique response, concentrated on her approaching moment of self-discovery, a moment to which the entire poem is fixed in an intense fury. The poem deals with elemental existences, not lashes of feelings and complex situations. “The Apparition” is the confession of a man at the instant when he comes into being a ghost, a nothing, even to the woman he loves.

The poem is especially dramatic as a cruel resolution although the power is in the hands of the mistress. By its plot and the stance of its speaker, we take it to be part of Donne’s first great period of lyric writing. “The Apparition” indulgences the persuasion to love as a dramatic situation of intimacy, not simply as an occasion for cunning positioned in an abstract world. Much of the wit of the poem rests in the reader’s ability to appreciate the counterpoint between the dramatic scene and the ironic language. 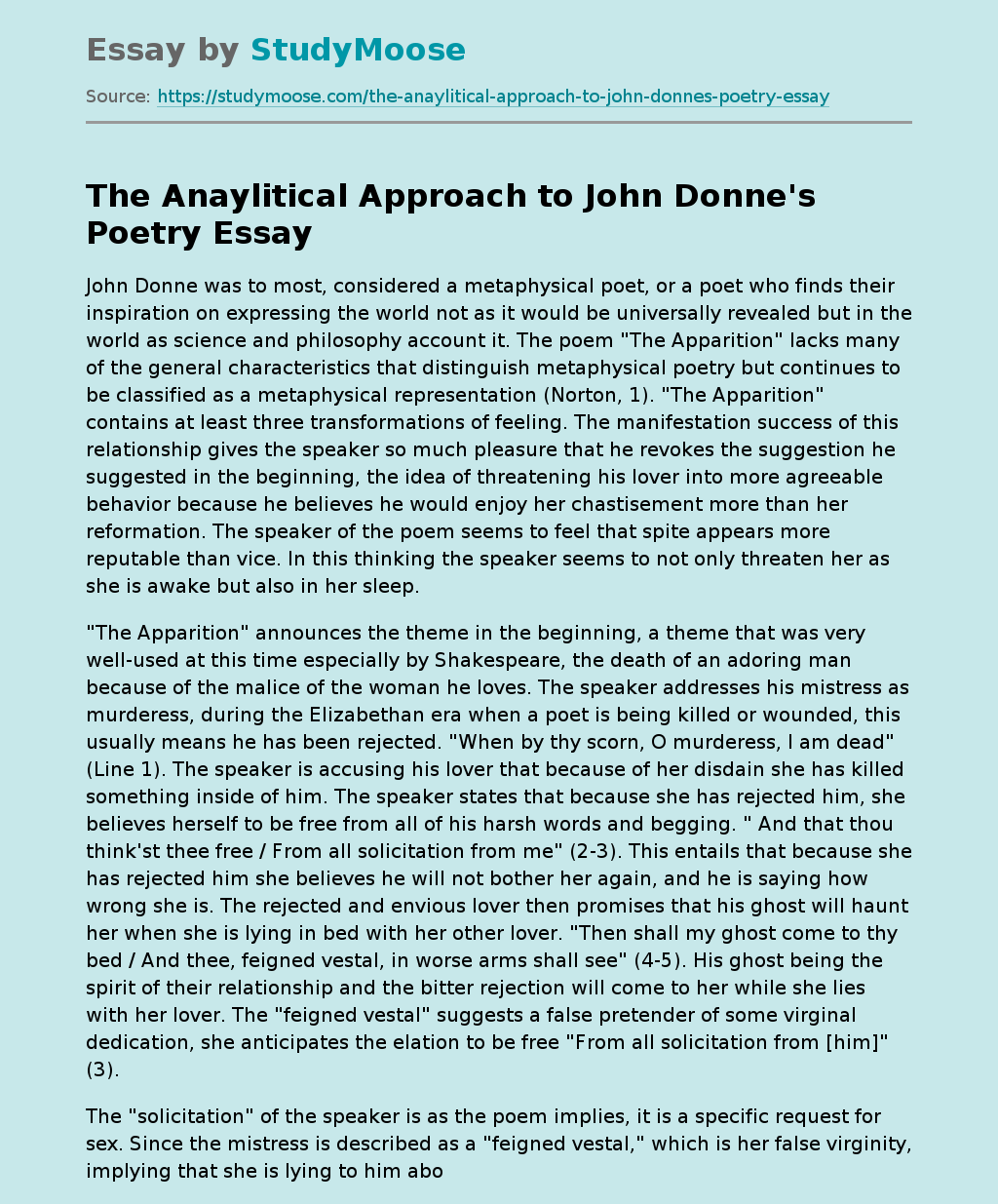