The American Revolution And The British Revolution

The American Revolution, which was the strive of the colonial america to obtain independence, should have really been called, The British Revolution, for it was the British who brought upon the actions that made the final separation between the colonies and Great Britain. The colonies wanted to separate from the British because of the unfair demands and taxes they gave from 1763 through 1776. There were various problems for the colonists; politically, economically, religiously, and socially. Following the French and Indian War, the British had to take action in order to restore what was lost in the war.

Don't use plagiarized sources. Get your custom essay on
“ The American Revolution And The British Revolution ”
Get custom paper
NEW! smart matching with writer

These actions are what pushed the colonial america to want a separation from Britain, they had it with Britain undermining them and just using them to the point where the colonists felt like slaves. After all, the colonies were just used as much as they could in favor of the crown.

The French and Indian war brought an economic despair for Great Britain, they were in were in debt due to war expenses.

Prime Minister of the time, George Grenville, started applying acts which made life for the people harder. The first act was the Sugar Act, which made a bigger demand on the sugar imported from the West Indies, and an increase on taxes on sugar, wine, etc., this caused the colonists to boycott and smuggle good. Also along came the Currency Act, which prohibited the colonies from issuing paper money. The currency act angered the colonists because they already had a trade deficit with Britain, and this just made it worst for them.

Another act that caused economic problems was the Boston Port Act, which closed the Boston harbor, and ships were not allowed to come in for any business. Many colonists were deeply affect by the economic problems in the colonies, it made some poor and disallowed others to flourish in their economic status.

The British made the colonists feel weak politically with all the new laws at the time. The Proclamation of 1763 prohibited the colonists from settling beyond the Appalachian Mountains. This made many colonists furious because they could not grow crops there any longer, people lost already owned land, and it limited people’s settling space. One major act that made a great political dispute was the Stamp Act. The Stamp Act mandated stamp taxes on various items of paper, which made things very expensive and overall caused the colonies to come together with a greater enemy. The Stamp Act Congress, which the first form of intercolonial unification, came up with rights and their grievances to Britain in response to the Stamp Act. The Intolerable Acts were a response to the Boston Tea Party, they outlawed local town meetings, which took away much local authority in the colonies. These political changes made some colonists feel pointless towards local officials, since Britain could change their way of living with a wave of their hand.

Along with these big political and economic changes that the British made towards the colonies, they also made some changes that go in the hand or religion and social standards. The Quartering Act, which made people in the colonies house and feed soldier if needed, caused people to think that it was unfair for them to have to be responsible for British soldiers. The fact of British soldiers being in the colonies and all these taxes being added on top of everything angered many, the Boston Massacre was a result of this, British soldiers opened fire at an angry mob attacking them. The Quebec Act made many colonists feel unequal to the way Canada was being treated. While they were paying taxes, the people in Canada were receiving religious freedom to forms of Catholicism and freedom to the French language and French Civil Law. Colonists had lost a potential ally, which made the enemy, Britain, seem even worse.

By the end of the American Revolution, I think it is safe to say that it was British actions that pushed the colonies to seek independence. British acts after The French and Indian War, made colonists look at their way of being ruled unfairly. They even came up with the statement, “No Taxation Without Representation”, for all the unfair, expensive taxes that were imposed. To some extent, the American Revolution can be called the “British Revolution”, it was mainly Britain’s actions that made the final push for the colonists in wanting independence. Although it was not just the British, it was a long thing coming for the colonists, at one point they would have wanted separation from Britain.

The American Revolution And The British Revolution. (2016, Oct 20). Retrieved from https://studymoose.com/the-american-revolution-and-the-british-revolution-essay 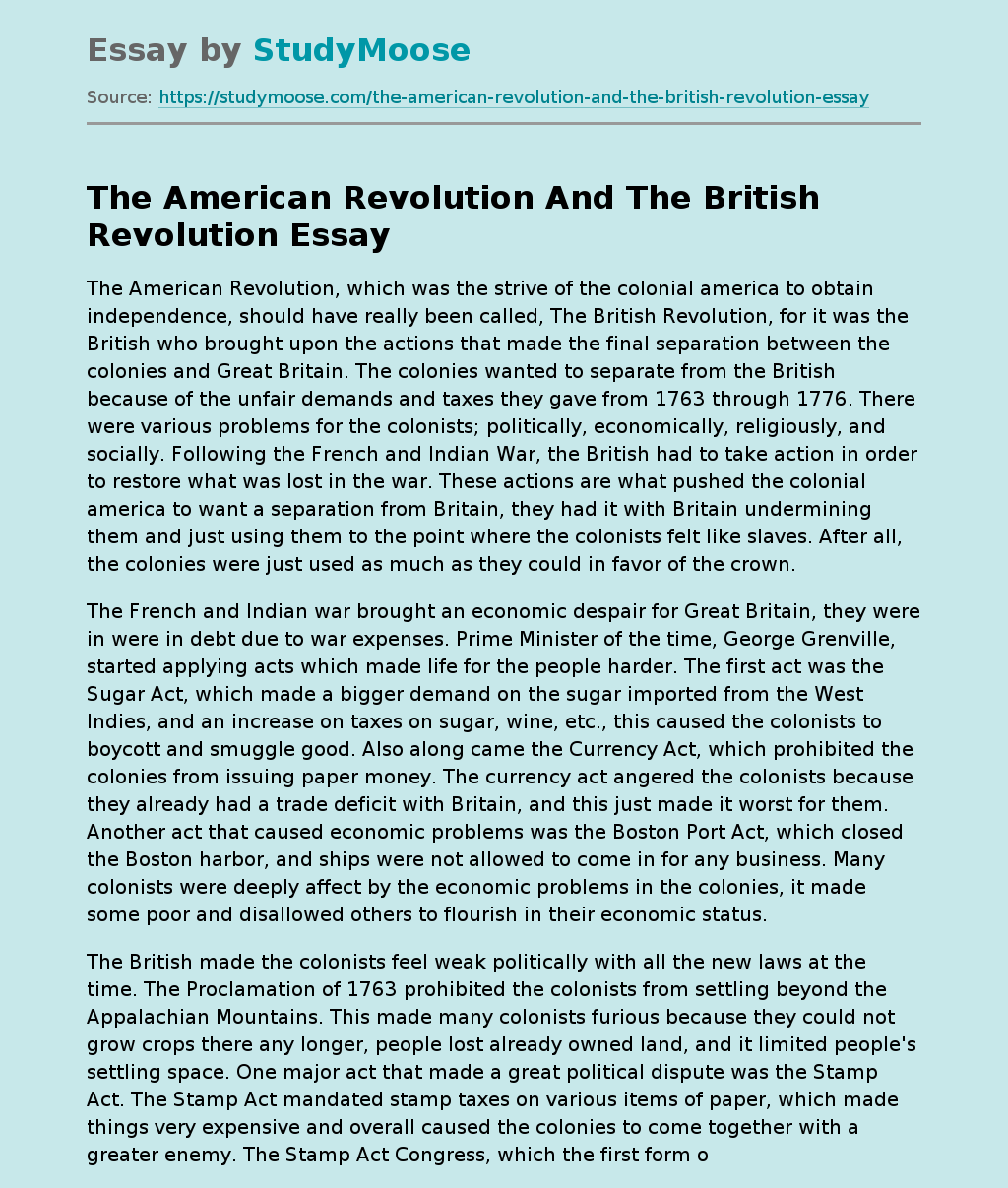