The Adventures of Tom Sawyer

Tom Sawyer is about a mischievous, curly haired boy who has many exciting adventures. Tom has to scheme his way out of trouble with his strict Aunt Polly and annoying cousin Sid watching him. Tom lives with his Aunt Polly because his poor mother had passed away quite a while ago. Tom gets into much trouble, at school, and at home. One of Tom’s biggest adventure takes place in McGuffey’s Cave. Tom and a few other children, including the judge’s daughter Becky Thatcher, go near McGuffey’s Cave for a picnic.

Don't use plagiarized sources. Get your custom essay on
“ The Adventures of Tom Sawyer ”
Get custom paper
NEW! smart matching with writer

At the picnic, the children decide to explore the cave. Becky and Tom stray away from the rest of the children, deeper into the cave.

Soon, the ferry comes to get the children. All the children get on the ferry, except for Becky and Tom. Tom’s really in for trouble now! Becky and Tom stray farther and farther into the cave, not yet aware that the ferry has come and gone.

The two children only have a candle for light. Tom and Becky soon are quite aware that the other children are gone. Becky tires out and says she cannot go any farther, so Tom goes by himself to look for an opening in the cave. When Tom is searching, he sees the murderer, Injun Joe, inside the cave! The town celebrates, and Becky’s father, Judge Thatcher, locks up the cave.

Injun Joe, trapped inside, starves to death. The major conflict in the story is that when Tom and Huck perceive their biggest struggle to be between themselves and Injun Joe, whose gold they want and whom they believe is out to kill them.

Conflict also exists between Tom and his imaginative world and the expectations and rules of adult society. While the climax of the story is when · Huck overhears Injun Joe’s plan to kill the Widow Douglas, and Tom encounters Injun Joe when he and Becky are stranded in the cave. Setting The setting of the story takes place in the fictional town of St.

Petersburg, Missouri (which resembles Twain’s hometown of Hannibal). While the time is not specified, but probably around 1845. Characters Tom Sawyer is the protagonist in the story. Tom is a mischievous boy with an active imagination who spends most of the novel getting himself, and often his friends, into and out of trouble. Despite his mischief, Tom has a good heart and a strong moral conscience. As the novel progresses, he begins to take more seriously the responsibilities of his role as a leader among his schoolfellows. Huckleberry Finn is the son of the town drunk.

Huck is a juvenile outcast who is shunned by respectable society and adored by the local boys, who envy his freedom. Like Tom, Huck is highly superstitious, and both boys are always ready for an adventure. Huck gradually replaces Tom’s friend Joe Harper as Tom’s sidekick in his escapades. Becky Thatcher is the Judge Thatcher’s pretty, yellow-haired daughter. From almost the minute she moves to town, Becky is the “Adored Unknown” who stirs Tom’s lively romantic sensibility. Naive at first, Becky soon matches Tom as a romantic strategist, and the two go to great lengths to make each other jealous.

The Adventures of Tom Sawyer. (2016, Dec 11). Retrieved from https://studymoose.com/the-adventures-of-tom-sawyer-essay 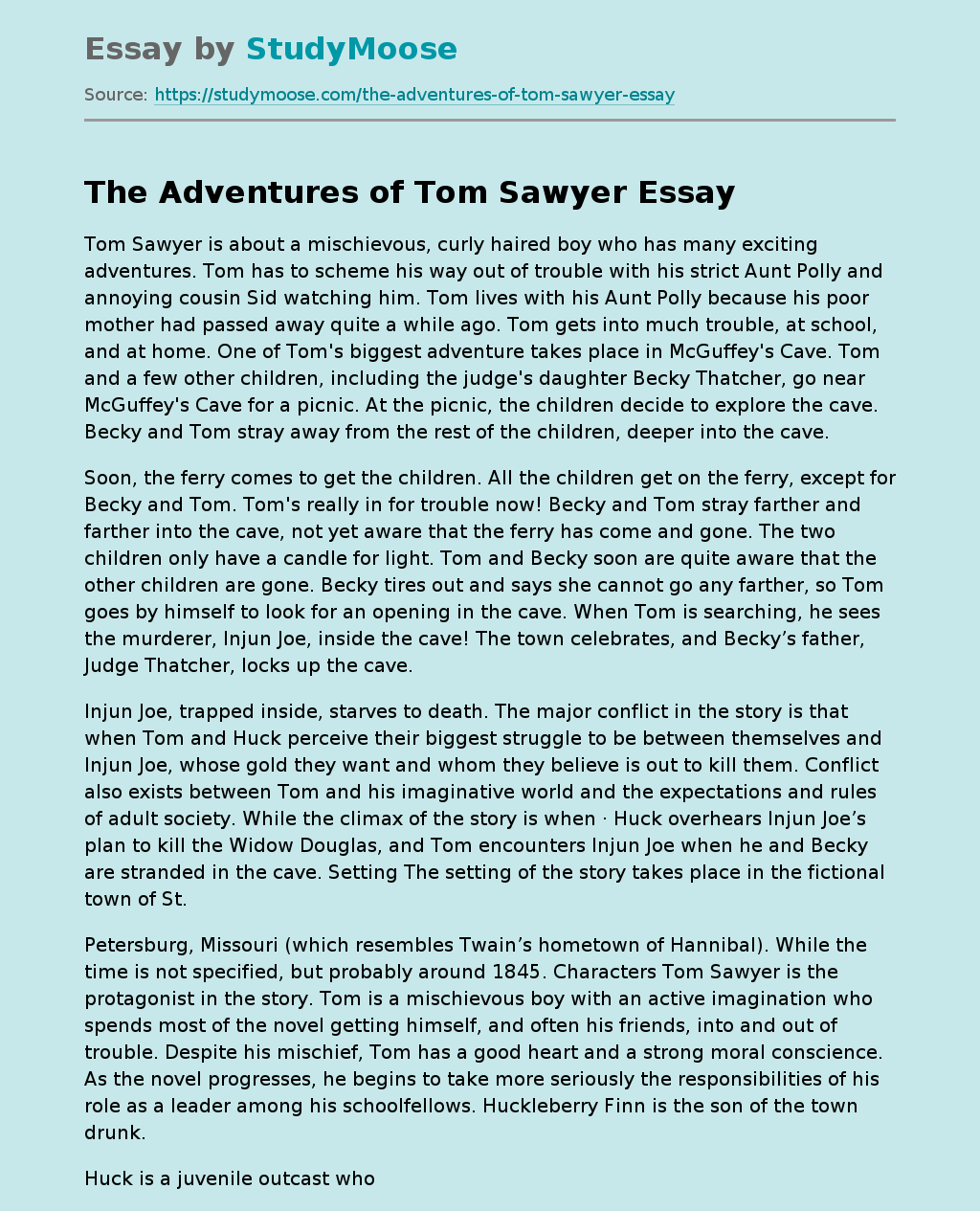