The Adventures of Huckleberry Finn - Bildungsroman

The novel of Mark Twain’sThe Adventures of Huckleberry Finn is about a young boy, Huck, coming of age. It is a story of Huck’s struggle to win freedom for himself and Jim, a runway slave. The many adventures that Huck goes on become a learning process to maturity by learning to be self-sufficient, sic “sivilize”, adverse, and adventurous.

Mark Twain examines the influence of adults that Huck experiences during his childhood By Pap teaching him to be self-sufficient, the Widow educating him in being “sivilize”, and Jim teaching him about humanity, it aids him in his bildungsroman, his moral education.

Don't use plagiarized sources. Get your custom essay on
“ The Adventures of Huckleberry Finn – Bildungsroman ”
Get custom paper
NEW! smart matching with writer

Huck allows his own logic to realize what is good and bad, rather than blindly following his elders’ teachings.

At the beginning of the novel, Huck shows his skepticism of the values that society imposes when the Widow Douglas attempts to sic “sivilize” him. Huck describes his life with the Widow as ” regular and decent” (1). She dresses him in starchy clothes while sending him to school to learn math and literature.

When Huck did not like to be sic “sivilize” anymore, he returned back to his old ways. Huck says, ” …when I couldn’t stand it no longer, I lit out.

I got into my old rags…and was free and satisfied” (1). When he is unable to take the restrictions of life any longer, he simply releases himself and goes back to what he feels is right and what makes him happy. Huck returns back to the Widow after Tom convinces him to come back.

When Miss. Watson, the Widow’s sister, tells Huck about the “bad place”, hell, he says, “I wished I was there” (2). He said this because he wanted a change from the sic “sivilize” world. Huck distrusts the morals and precepts of the society that labels him an outcast.

Huck’s life with his Pap is far from sic “sivilize.” Pap is the town drunk who comes back into town after hearing his son has some money. Being illiterate, he disapproves of Huck’s education and his sic “sivilize” ways. Pap tells Huck, “you’re educated…You think your’re better’n your father, now, don’t you, because he can’t?” (14). Pap is very mad that Huck became the first in the family to learn to read. Huck lets Pap abuse him because he does not want any more problems. Huck explains, “If I never learnt nothing else out of pap, I learnt that the best way to get along with his kind of people is to let them have their own way” (95).

When Pap beats and neglects Huck, he teaches Huck to be self-sufficient and not to depend on others for help. Pap leaves him in a cabin locked in a room for hours and even days. When Huck is left in the cabin, he is given plenty of time to consider his options. If he remains in the cabin, he will continue to be powerless to the will of his father. He realizes that escape is his only solution. By staging his own murder, Huck kills himself to society’s influences and enables his own uninhibited personal growth.

Free of society’s rules and standards, he is fortunate enough to have Jim along for companionship, removing the loneliness that prevented his earlier flight from society. This friendship is at first corrupted by society’s influence on Huck. Fortunately, free of society’s rules and standards, Huck begins to undo his misperceptions of slaves, and begins to realize that Jim is a human just like he is.

When Huck realizes Jim has feeling and is not a piece of property after he plays a trick on him, he cries out, “I made me feel so mean I could almost kissed his foot to get him to take it back “(65). Jim becomes a surrogate father, as well as a friend, to Huck. Jim is the only real adult in the book, and the only one who provides a positive, respectable example for Huck to follow.

Throughout the book, Huck encounters people such as pap, the Widow, and Jim who teach him lessons that prove to be useful along his journey to freedom. He come to realize how his life changed throughout his experiences, and he believes that the society he was born into is corrupted by the same people who taught him his life lessons. Fortunately, because of the money and the lack of legal control, he plans to “light out for the Territory ahead of the rest” (220), where he seeks freedom

The Adventures of Huckleberry Finn - Bildungsroman. (2016, Sep 07). Retrieved from https://studymoose.com/the-adventures-of-huckleberry-finn-bildungsroman-essay 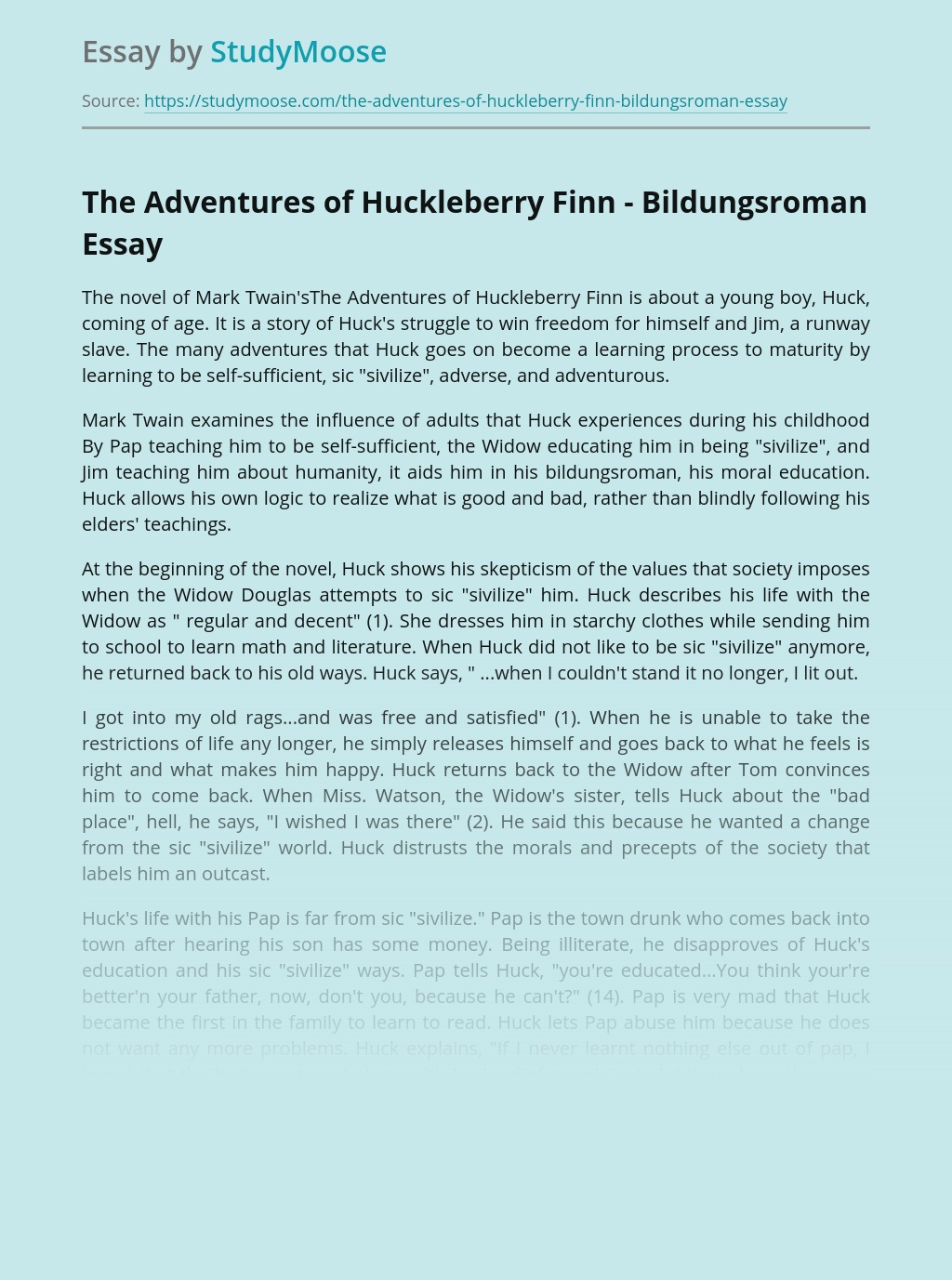