The Adventures of Huckleberry Finn

Although Mark Twain wrote the novel The Adventures of Huckleberry Finn after the abolition of slavery in the United States, the story itself takes place before the Civil War, also known as the antebellum, when slavery was still legal and the economic foundation of the American South. This slavery and racism poses a frequent thematic idea present in the ideologies of most people during that time period. But when Mark Twain opposes this mentality in the story, what is being said about Twain’s opinion on this issue.

Don't use plagiarized sources. Get your custom essay on
“ The Adventures of Huckleberry Finn ”
Get custom paper
NEW! smart matching with writer

Mark Twain portrays his severe disliking for racism and slavery that was prominent during the antebellum through the characters found in The Adventures of Huckleberry Finn. Twain illustrates racism and slavery as senseless and cruel through the relationship of the main protagonist, Huckleberry Finn, and a runaway slave, Jim. At the beginning of the novel, Huck is indoctrinated into believing racial stereotypes, such as African-American slaves being inferior to white people, and even admonishes himself for not returning Jim to his rightful owner after Huck runs away with him.

Huck believes that he has a societal and legal obligation that he must follow, otherwise, he would be committing wrongdoing to a white person that never hurt him, something he views as a sin.

However, as Huck gets to know and befriend Jim, he realizes that he and Jim are both equal human beings with powerful emotions of love and hate. Huck comes to recognize that Jim constantly proves himself to be a much better man than anyone Huck has encountered in his adventures.

By the end of the novel, Huck would rather disregard and defy his societal standards and religion. For example, when Jim is caught as a runaway slave by a white man, Huck decides to “go to work and steal Jim out of slavery” regardless of the consequences and even says “[he’ll] go to hell” for Jim (Twain 214). Huck is a young boy who has been heavily influenced by religious beliefs in his life, seen when his gang refuses to harm people on Sunday, a churchgoing day. But now, his bond with Jim, causes him to disregard these standards and accept one of the worst types of punishment, getting sent to “hell” in the afterlife. Also, before, Huck felt guilty for helping Jim run away from Mrs. Watson, a white female that had total control of Jim’s life.

But now, Huck realizes that all humans are equal and Jim deserves to be free, thus deciding to “steal Jim” from slavery. By Twain opposing the standardized perspective of a white male helping slaves, Twain clearly implies his progressive thinking regardless of outside influences. Back around the time the book was written and taken place, the civil war era, African-Americans were severely oppressed by white people and treated very poorly. But Twain’s idea of how white males should treat slaves revolutionized the idea of egalitarianism, leading to today’s society, where the equality of human beings in more prevalent.

The Adventures of Huckleberry Finn. (2021, Apr 15). Retrieved from https://studymoose.com/the-adventures-of-huckleberry-finn-32-essay 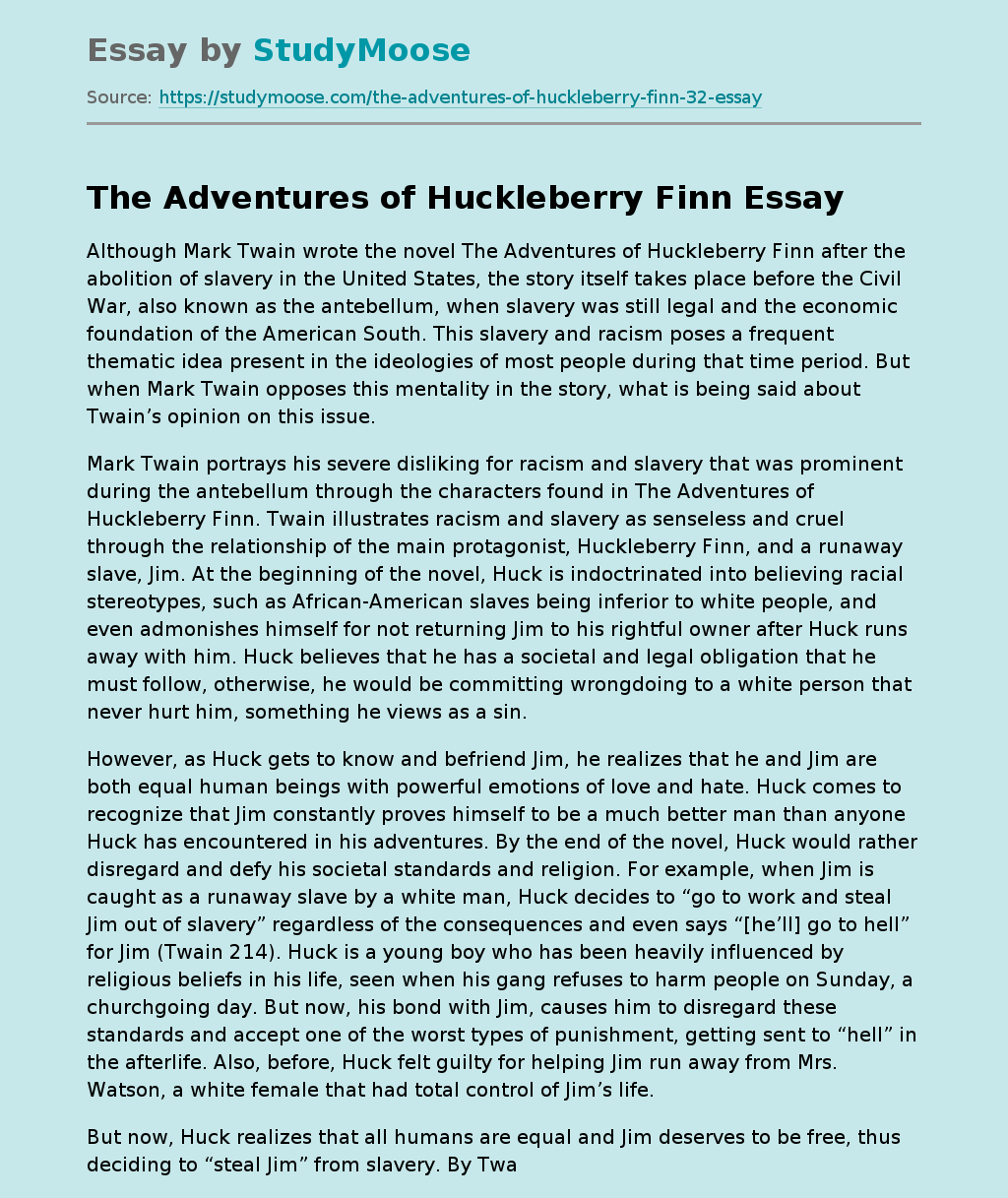