The Advantage of Flexible Exchange Rates

Under flexible exchange rate system, a country is free to adopt an independent policy to conduct properly the domestic economic affairs. The monetary policy of a country is not limited or affected by the economic conditions of other countries. Solutions to Balance of Payment Problems:

Don't use plagiarized sources. Get your custom essay on
“ The Advantage of Flexible Exchange Rates ”
Get custom paper
NEW! smart matching with writer

A fluctuating exchange rate system protects the domestic economy from the shocks produced by the disturbances generated in other countries.

Promotes International Trade: The system of flexible exchange rates does not permit exchange control and promotes free trade. Restrictions on international trade are removed and there is free movement of capital and money between countries. Market Forces at Work:

Under the flexible exchange rate system, the foreign exchange rates are determined by the market forces of demand and supply.

Market is cleared off automatically through changes in exchange rates and the possibility of scarcity or surplus of any currency does not exist. Promotes Economic Development:

The flexible exchange rate system promotes economic development and helps to achieve full employment in the country. The exchange rates can be changed in accordance with the requirements of the monetary policy of the country to achieve the objectives. Increase in International Liquidity:

The system of flexible exchange rates eliminates the need for official foreign exchange reserves, if the individual governments do not employ stabilization funds to influence the rate.

The argument that long-term international investments are encouraged under fixed exchange rate system is not valid. Both the lenders and borrowers cannot expect the exchange rate to remain stable over a very long-period. Fixed Rates not Necessary for currency Area:

These stable exchange rates are not necessary for any system of currency areas. The sterling block functioned smoothly during the thirties in spite of the fluctuating rates of the member countries. Speculation not Prevented by Fixed Rates:

The main weakness of the stable exchange rate system is that in spite of the strict exchange control, currency speculation is encouraged. This destroys the stability in the exchange value of the home currency and makes devaluation of the currency inevitable.

The elasticity’s in the international markets are too low for exchange rate. When import and export elasticity’s are very low, the exchange market becomes unstable. Hence, the depreciation of the weak currency would simply tend to worsen the balance of payments deficit further. Adverse Effect on Economic Structure:

The system of flexible exchange rates has serious repercussion on the economic structure of the economy. Fluctuating exchange rates cause changes in the price of imported and exported goods which, in turn, destabilise the economy of the country. Unnecessary Capital Movements:

Experience of the flexible exchange rate system adopted between the two world wars has shown that it was a flop. Unstable conditions: Flexible exchange rates create conditions of instability and uncertainty which, in turn, tend to reduce the volume of international trade and foreign investment. Long-term foreign investments arc greatly reduced because of higher risks involved. Depression Effects of Capital Movements:

Advantages of Fixed Exchange Rates The main arguments advanced in favor of the system of fixed or stable exchange rates are as follows: 1. Promotes International Trade: Fixed or stable exchange rates ensure certainty about the foreign payments and inspire confidence among the importers and exporters. This helps to promote international trade. 2. Necessary for Small Nations:

Fixed exchange rates are even more essential for the smaller nations like the U.K., Denmark, Belgium, in whose economies foreign trade plays a dominant role. Fluctuating exchange rates will seriously affect the process of economic growth in these economies. 3. Promotes International Investment:

Fixed exchange rates eliminate the speculative activities in the international transactions. There is no possibility of panic flight of capital from one country to another in the system of fixed exchange rates. 5. Necessary for Small Nations:

Fixed exchange rates arc even more essential for the smaller nations like the U.K., Denmark, Belgium, in whose economies foreign trade plays a dominant role. Fluctuating exchange rates will seriously disturb the process of economic growth of these economies. 6. Necessary for Developing Countries:

Fixed exchanges rates are necessary and desirable for the developing countries for carrying out planned development efforts. Fluctuating rates disturb the smooth process of economic development and restrict the inflow of foreign capital. 7. Suitable for Currency Area:

Fixed foreign exchange rate ensures internal economic stabilization and checks unwarranted changes in the prices within the economy. In a system of flexible exchange rates, the liquidity preference is high because the businessmen will like to enjoy wind fall gains from the fluctuating exchange rates. This tends to Increase price and hoarding activities in country. 9. Not Permanently Fixed:

Under the fixed exchange rate system, the exchange rate does not remain fixed or is permanently frozen. Rather the rate is changed at the appropriate time to correct the fundamental disequilibrium in the balance of payments. 10. Other Arguments:

The system of fixed exchange rates has been criticized on the following grounds: 1. Outmoded System: Fixed exchange rate system worked successfully under the favorable conditions of gold standard during 19th century when (a) the countries permitted the balance of payments to influence the domestic economic policy; (b) there was coordination of monetary policies of the trading countries; (c) the central banks primarily aimed at maintaining the external value of the currency in their respective countries; and (d) the prices were more flexible. Since all these conditions are absent today, the smooth functioning of the fixed exchange rate system is not possible. 2. Discourage Foreign Investment:

Fixed exchange rates are not permanently fixed or rigid. Therefore, such a system discourages long-term foreign investment which is considered available under the really fixed exchange rate system. 3. Monetary Dependence:

Under the fixed exchange rate system, a country is deprived of its monetary independence. It requires a country to pursue a policy of monetary expansion or contraction in order to maintain stability in its rate of exchange. 4. Cost-Price Relationship not reflected:

The system of fixed exchange rates provides neither the expectation of permanently stable rates as found in the gold standard system, nor the continuous and sensitive adjustment of a freely fluctuating exchange rate. 6. Difficulties of IMF System:

The system of fixed or pegged exchange rates, as followed by the International Monetary Fund (IMF), is in reality a system of managed flexibility. It involves certain difficulties, such as deciding as to

(a) when to change the external value of the currency, (b) what should be acceptable criteria for devaluation; and (c) how much devaluation is needed to reestablish equilibrium in the balance of payments of the devaluing country.

There are two ways the price of a currency can be determined against another. A fixed, or pegged, rate is a rate the government (central bank) sets and maintains as the official exchange rate. A set price will be determined against a major world currency (usually the U.S. dollar, but also other major currencies such as the euro, the yen, or a basket of currencies). In order to maintain the local exchange rate, the central bank buys and sells its own currency on the foreign exchange market in return for the currency to which it is pegged.

Unlike the fixed rate, a floating exchange rate is determined by the private market through supply and demand. A floating rate is often termed “self-correcting”, as any differences in supply and demand will automatically be corrected in the market. Take a look at this simplified model: if demand for a currency is low, its value will decrease, thus making imported goods more expensive and thus stimulating demand for local goods and services. This in turn will generate more jobs, and hence an auto-correction would occur in the market. A floating exchange rate is constantly changing.

In reality, no currency is wholly fixed or floating. In a fixed regime, market pressures can also influence changes in the exchange rate. Sometimes, when a local currency does reflect its true value against its pegged currency, a “black market” which is more reflective of actual supply and demand may develop. A central bank will often then be forced to revalue or devalue the official rate so that the rate is in line with the unofficial one, thereby halting the activity of the black market. In a floating regime, the central bank may also intervene when it is necessary to ensure stability and to avoid inflation; however, it is less often that the central bank of a floating regime will interfere. Answer

Fixed vs. Flexible Fixed advantages A fixed exchange rate should reduce uncertainties for all economic agents in the country. As businesses have the perfect knowledge that the price is fixed and therefore not going to change they can plan ahead in their productions. Inflation may have a harmful effect on the demand for exports and imports. To ensure that inflation is kept as low as possible the government is forced to take measurements, to keep businesses competitive in foreign markets. In theory a fixed exchange rate should also reduce speculations in foreign exchange markets. In reality this is not always the case as countries want to make speculative gains. Fixed Disadvantages

The government is keeping the exchange rate fixed by manipulating the interest rates. If the exchange is in danger of falling the government needs to increase interest rates to increase demand for the currency. As this would have a deflationary effect on the economy the demand might decrease and unemployment might increase. A government has to maintain high levels of foreign reserves to keep the exchange rate fixed as well as to instill confidence on the foreign exchange markets. This makes clear that a country is able to defend its currency by the buying and selling of foreign currencies. Fixing the exchange rate is not easy as there are many variables which are changing over time if the exchange rate is set wrong it might be hard for export companies to be competitive in foreign countries. International disagreement might be created when a country sets its exchange rate on a too low level. This would make a countries export more competitive which might lead to a disagreement between countries as they might see it as an unfair trade advantage. Flexible Advantages

As the exchange rate does not have to be kept at a certain level anymore interest rates are free to be employed as domestic management policies(Appleyard 703). The floating exchange rate is adjusting itself to keep the current account balanced, in theory. As the reserves are not used to control the value of the currency it is not necessary to keep high levels of reserves (like gold) of foreign countries.

The Advantage of Flexible Exchange Rates. (2016, Dec 11). Retrieved from https://studymoose.com/the-advantage-of-flexible-exchange-rates-essay 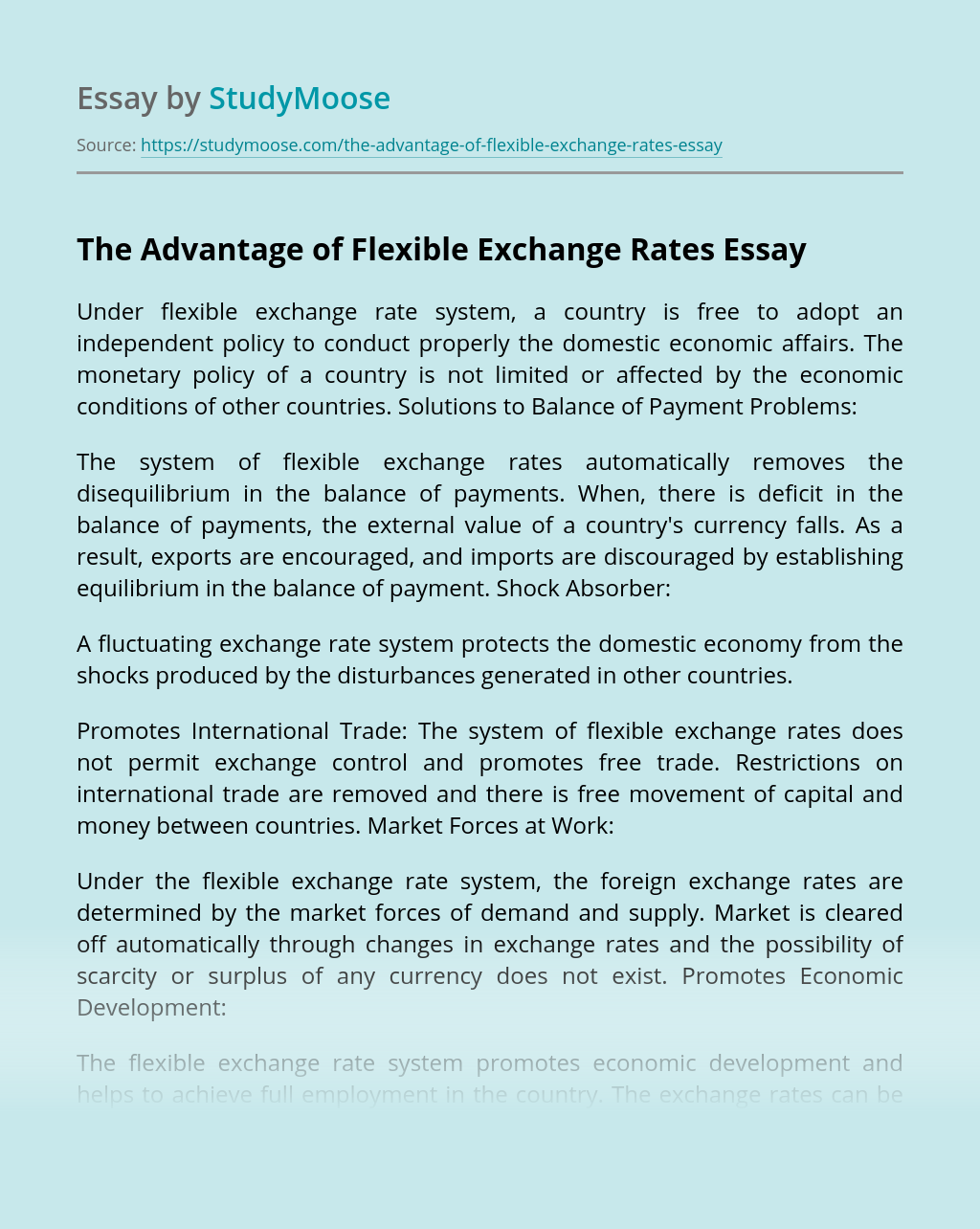