The Essay “The 51-Per-Cent Minority” by Doris Anderson

Doris Anderson argues that women are routinely discriminated against by comparing women to other minorities such as African-Americans and Quebeckers. She points out that women waitresses and sales clerks often earn less than males doing the same job. Ironically, women are not even a minority, but we see them that way because the government doesn’t attempt to rectify the issue. The irony of the title has a very strong effect on the reader since it provides the statistics that 51% of people in America are women; however they are nonetheless perceived as minorities.

Don't use plagiarized sources. Get your custom essay on
“ The Essay “The 51-Per-Cent Minority” by Doris Anderson ”
Get custom paper
NEW! smart matching with writer

Canada as a country can’t tolerate discrimination with different religion and race, but it can tolerate “all of these discriminatory practices which are being inflicted on women today in Canada Anderson’s essay “The 51-per-cent minority” is a deductive essay.

The general principle is explained through the title “The 51-per-cent minority” which is saying even though women account for 51% of Canada’s population they still get discriminated upon.

A test case that supports the general principle is when women workers earn, on average only 70 cents for every $1 man gets- even though on average, women are better educated than men. Therefore, all the discriminatory practices would be set aside if women were anything else but a woman.

The essay “The 51-per-cent minority” by Doris Anderson is a deductive comparison between the treatment of different races, religion and women Anderson seems to be well aware of what’s going on around her in terms of minorities and different sexes.

The process of the essay is very clear in terms of argumentation. She seems to capture reader’s attention during the introduction when she uses irony. This could be considered hidden assumption because the reader is supposed to realize a bigger meaning than what’s actually in the essay. But the writing process does consist of some flaws, because Anderson doesn’t start with the main idea of the essay the readers might have to go back and re-read the essay to get their thoughts straight.

The Essay “The 51-Per-Cent Minority” by Doris Anderson. (2016, Dec 31). Retrieved from https://studymoose.com/the-51-per-cent-minority-essay 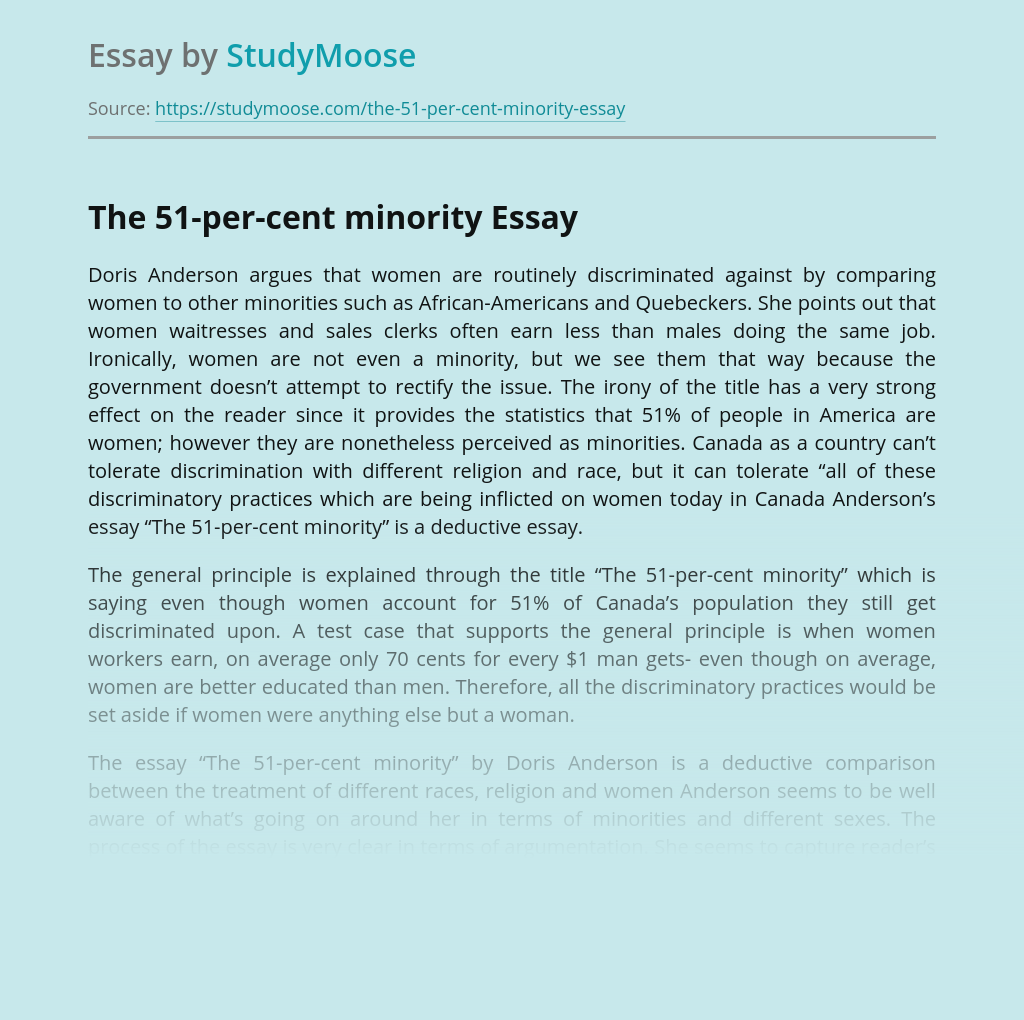