The Book Expo is an international event or rather a festival which calls upon all book publishers from around the world.

Don't use plagiarized sources. Get your custom essay on
“ The 2009 Book Expo America (BEA) ”
Get custom paper
NEW! smart matching with writer

Usually held in a major city of the United States, it is set up for four days at the end of May or beginning of June, the festival calls upon publishers, authors, librarians, and buyers from around the globe. The event focuses upon exhibiting any new titles promotion campaigns, sell off current books entitled under it, attaining rights to international markets and to socialize with other big publishing houses, spread around the world.  BEA was initially operated by Reed Exhibitions, who bought the show from the American Booksellers Association (ABA) in 1992; and later took the name of Book Expo America.

The main event was planned to start off at the Jacob K. Javits Convention Centre, New York, which held many attractions for the onlookers to follow. The main happening of the fair, which would be on looked by all comers, was the “Big Ideas at BEA” conference, which would continue from 12pm to 5pm on the first day.  This conference is launched in order for the publishers and retailers of the industry to acquaint with each other.

The events will start off at 4pm on 28 May, with ‘Editor’s Buzz,’ whereby all the editors will talk about the year’s greatest publications, new discoveries and prospective books of the year.

However, the night is planned to be a flamed by the musical performance of the “Opening Night Reception,” which will encapsulate the event, with the arrival of the Chief Guest, Abu Musa, with his ribbon cutting ceremony, opening the festival.

The next day is thought to begin with an hour dedicated for the promotion of Children’s publications, followed by Adult Editor’s Buzz, which would reveal insides for the potential break outs for the next year and all new publications. International Rights Centre has its hours reserved through the three days program, which will give publishers, agents, scouts, and editors from around the world the opportunity to sign up legal rights contracts, providing them the access to conduct business at a much wider scale.

The following day’s special event is of, “Speed Dating with Children’s Authors,” which would provide visitors as well as publishers to talk to the authors spreading the word of their new releases and getting books autographed. (BookExpoAmerica.com, 2009)

One of the most significant impacts that this year’s BEA is going to lave on the international media, is the new link formation between the Arabs and the rest of the world, through this literary connection. It is believed to encourage debates between the Arab culture and profession to promote the book publishers and other dignities for collaborating in the business. As Lance Fensterman, Vice President of BEA states that, “This is the first time that BEA brings such a large regional focus to its attendees, and we are delighted that it will bring Arab books, publishers, booksellers and authors in such significant numbers to New York.” (BookExpoAmerica.com, 2009)

Thus, to honor such a motive, Mr Amr Moussa, General Secetary of Arab League, was made the guest of honor of the festival. He is the publisher of 8 Arab countries, which include Algeria, Egypt, Lebanon, Saudi Arabia, Tunisia, and the United Arab Emirates (along with Abu Dhabi, Dubai and Sharjah), (BookExpoAmerica.com, 2009) and the event is supposed to provide him with the opportunity to look out for new publishing grounds in America.

The professional program, which is scheduled for May 29, will declare the gathering of both American and Arab publishers and editors to get together to discuss books translations in and out from Arabic. However, talks, which are planned to take place later, would discuss the trade routes of imports, exports, distribution of books, copyright patents, and market analysis of Arab book markets, which would open greater opportunity plans for the publishers of both sides.

Moreover, beyond the general practices of trade promotion, the event also will encourage the development of Arabic culture, through various events. May 30, is given the title of “New Eyes on the Arab World and Culture,” sponsored by Mohammed Bin Rashid Al Maktoum Foundation. (BookExpoAmerica.com, 2009) Whereas more programs to promote the culture diversity included, a lecture on Islamic contexts, the Arabic performance of the play “The Thousand and One Nights,” as well as a focus placed upon children publications; however, this program is also an advertisement placement for the coming festival, “Muslim Voices.” (BookExpoAmerica.com, 2009)

No matter this year has a 30% lesser attendance than last years, which is dictated towards the economic down turn around the world, with many writers and publishers backing out from the guest list. However, the organizers termed this problem as an opportunity though, stating that it would help them streamline their guest lists, so that making sure that relevant and necessary people alone attend the festival, making it more significant and its running more reliable, as Lance Fenstersman called it, “more focused,” and “concentrated.” (BookExpoAmerica.com, 2009).

Events such as Book Expo create opportunities for authors to connect themselves with publishers, and move from a local and regional level, to a much broader global level promotion. The festival, also acts as a form of recognition for emerging new authors, who are provided with new horizons, exposure and encouraged over their skills.

The most dominating factors of this year focus upon the structural change occurring around the world. Thus, the meeting resolves to collude upon e-books, social media, and connectivity problems. This benefited the fact that the book industry focuses upon grappling over the technological and economical change, in order to cope up with the varying factors.

For this the Book Expo has specified a, ‘New Media Zone’ allocated in the middle of the show floor, which provides bloggers opportunity to write and spread the word of the festival, moreover, it also is a mean to provide media technology information to others. (Heater, 2009) These bloggers appeared to be of so much competence, that companies like borders.com were able to pick up scripts of these blogs and add directly to their sites, greeting to the opportunity provided to the writers of easy access and encouragement. They plan to create a “perfect union” between the bloggers, publishers, book publishers, and authors. As Lance stated that,

“The blogging community is critical to our development over the next few years as it represents the essence of the dialogue and connectivity that defines BEA…a large interactive network encourages instant communication and conversation.  We hope that the lit blogging community and others will welcome these changes.”  (BookExpoAmerica.com, 2009)

E books is what the Expo this year is going to talk about, while showing off new devices such as iPod nanos, and displaying soft wares which converted books into online publications, the exhibition celebrated the penetration of IT even in the books industry.

Another important aspect found to the public through the Book Expo was the promotion gained by the African American independent writers, and publishers who were able to exhibit around 80,000 books and publications. The event provided the lowest price books, and provided the main source of education and promotion for the writers.

However, one of the silent threat that the Expo refused to cater to was the evaporation of books with the coming new technology, when they would be available online free of cost with just a click, how these Book Expos would be able to face the new fact of globalization and lack of demand then. Thus, the publishers and authors refuse to cater to this explanation still, and believe that such an innovation would leave them unhampered like the music industry. Nevertheless, what becomes of this hypothesis can only be told with the turn of time, as the book sales continue to fall at a rate of 1% each year and the only prospective buyers which the publishers could rely upon are the college students. The only form of book sales coming from digital publications, which completely negates the promotion of events such as Book Expo exhibitions, can be deemed as the only disadvantage of holding the event.

No matter the Book Expo America, 2009, is being organized in one of the worst economic conditions prevailing around the world, with many publishers and company’s calling off the event, but still it is believed to steer up the publishing industry of the world, with the greatest attendance ever. The festival is cutting off the amount of amount of parties and the extravagance shown in the previous years, but plans to depict high quality books, and attendees who mean true likeable business in the future. Therefore, the most pertinent picture which the festival is going to paint is the fact that what the economy presents as a slump in the book industry is a mere hyperbolized status; what the publishers need at the moment is a hopeful step towards the future; which could only help them resolve problems at hand.

Book Expo America. Retrieved on May 31, 2009 from http://www.bookexpoamerica.com/ 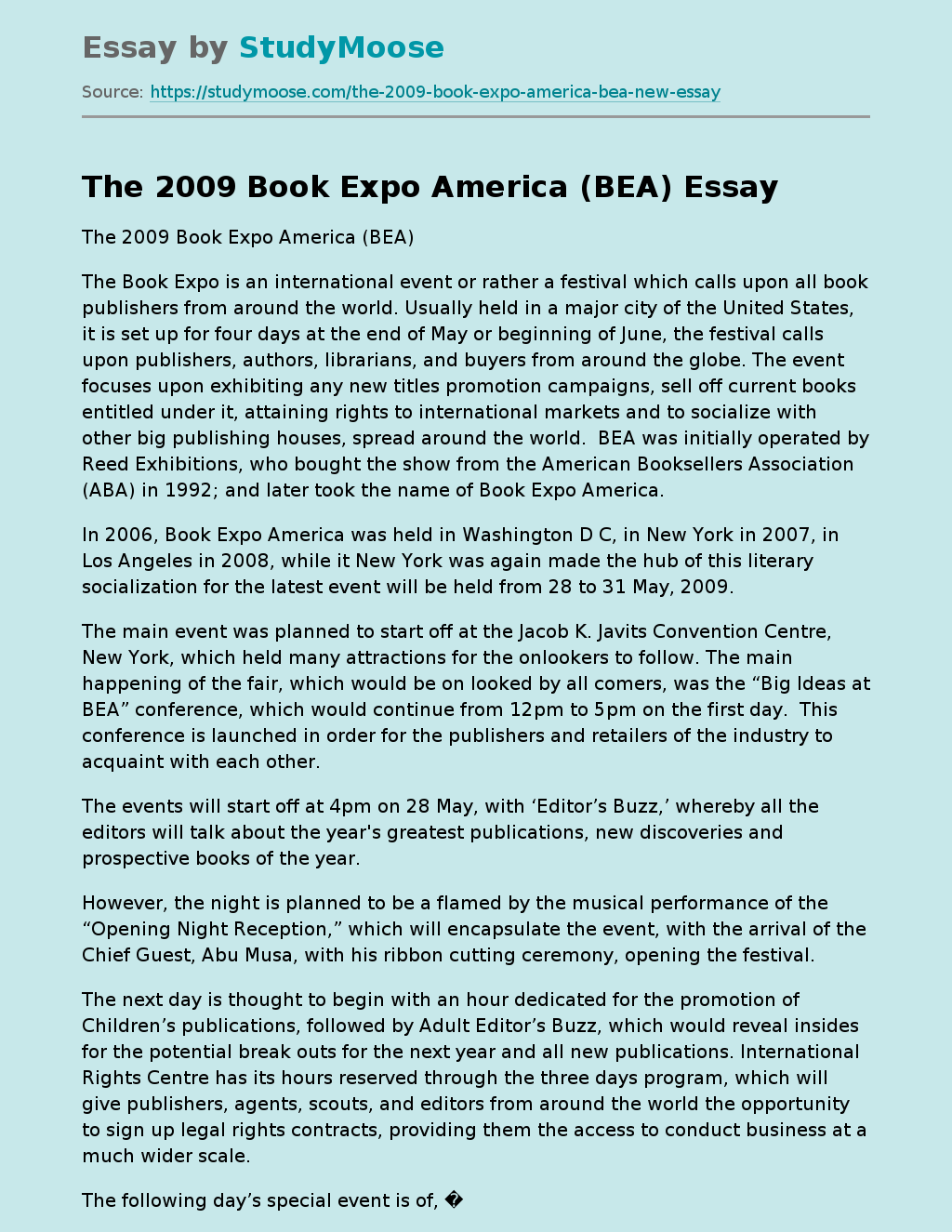