The 1967 referendum is about including Aboriginals people in the census and allowing the commonwealth to make laws for the aboriginals.

Don't use plagiarized sources.
Get Your Custom Essay on The 1967 referendum essay Just from $13,9/Page

At the same time of the referendum, harold Holt was the prime minister and liberal was in power. Before the referendum, there was a question in the census to establish the number of full blood aborigines society viewed aboriginals as a disadvantage. Aboriginal were able to vote in 1962, however they have no potential power and although they are allowed to vote, they are not counted in the census. Australia became more aware of the discrimination and of what other countries think of them and they finally removed the discrimination from federal legislation.

At this time, the laws regarding the aboriginal is the responsibility of the states government. Consequently, if an aboriginal moved to another state, their rights might be gained or lost. Furthermore by the end of 1966, aboriginal people has been granted legal rights but not citizenship.

A boriginals tried to be counted as Australians and a referendum was done to change the australian convention. A referendum is a voting system, where people vote yes or no to something and a majority of vote will win. Therefore the federal council campaign for a yes vote in the referendumThe context of the referendum is quite good. The aboriginals were hopeful towards the referendum and has faith on getting counted in the census because they successfully gaines the rights to vote in previous times. They believe that their chances of winning this referendum is strong. In addition, the Government also wanted to change the Australian constitution as they were viewed badly by overseas countries, so citizens were encouraged to vote yes. A booklet is usually handed out, in prior to the referendum. Usually it has information on the yes or no vote case and the disadvantage and advantages of each; in this case only the yes was printed out. This shows how much they want to change the constitution.

The referendum didn’t really have much impact on australia or the aboriginal. It was seen as the beginning of a new contract for the aboriginal. They assumed by changing the constitution, all the discrimination would be taken away. But this was not the case; The rules of the aboriginals were still left to the individual states to decide. Furthermore, the government was still reluctant to acknowledge the aboriginals. However, there was some good things that come out from it. The thing that the aboriginal gained was additional money to fund for the improvement of their housing, health and education. Moreover, a council of aboriginal affairs were established. In 2008, 13th February is a significant day for the aboriginals, asutralian prime minister, john howward apologises for. 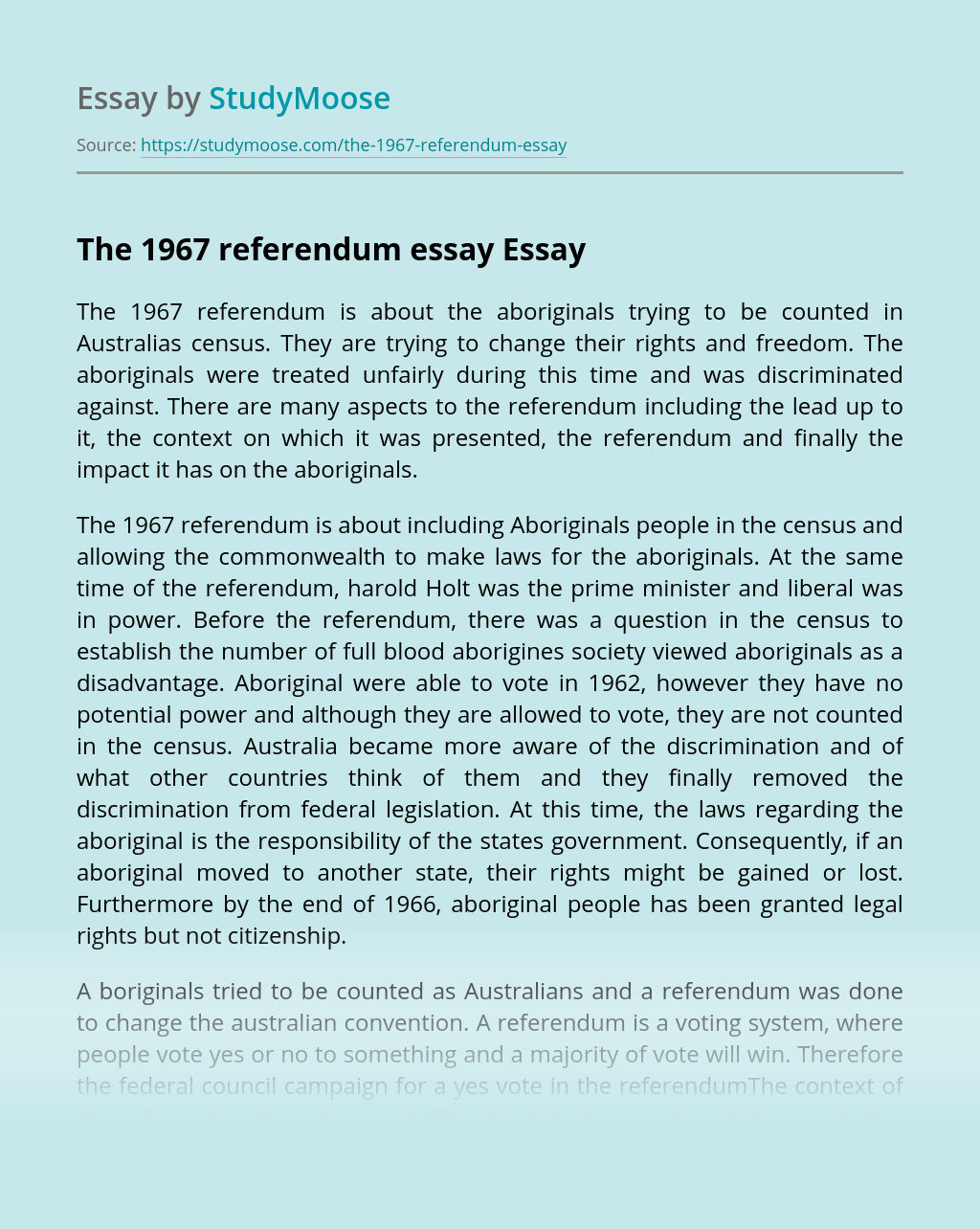 ﻿English “Go back to where you came from”

A discovery is an experiential process that takes place over time. It involves a trigger that prompts reflection or reassessment thus leading to an altered outlook, enhanced understanding, greater learning and self-awareness. Discoveries inevitability leads to growth. By exploring new world and lands can lead individuals on a journey of a spiritual development and transformation....

The Beauty of Australia

In this world, there are all different cities, states, counties and countries you can visit. The country that I admire the most is Australia. Australia is my favorite country because it is a big island and it is an independent continent, and that is not the only reason. The other reasons are because of the...

They operate their production safely and they believe that they are the businesses that have minimal injuries, fatalities or illnesses. It all succeeded due to a strong leadership that could handle and minimizes all the risks. Their operational systems are diversified geographically and commodity, which measures that they are the part of the local societies....

“Though the landscape is one of rare beauty, to a European or English eye it seems desolate, and even after more than forty years my father could not become reconciled to it. He longed for the generous and soft European foliage, but the Eucalypts of Baringhup, scraggy except for the noble red gums on the...

Australia is a multi cultural country consisting of a vast array of ethnically and consistently varied peoples, permitting benefits for Australian society. However, it can pose a prospective difficulty to social harmony and cohesion because to one faith the concept of what is afraid or crucial may contrast totally with another. Interfaith discussion is therefore...