According to the results obtained above, a lot of people are influenced by the convenience factor of amalgamated shops, the friendliness of the staff, as well as their safety, are taken into consideration before heading to a particular petrol station. Other factors posed as questions on the survey received vague answers, which in turn did not qualify to be considered as part of the statistical results obtained. However, a minority of people are totally not influenced by the factors most commonly considered.

Don't use plagiarized sources. Get your custom essay on
“ Factors that influence the consumer’s choice of petrol stations in the Gauteng area ”
Get custom paper
NEW! smart matching with writer

Shell was founded in 1907 by Marcus Samuel. Its headquarters are in the Netherlands. Shell was formerly known as Royal Dutch Shell plc because it was a British-Dutch oil and gas company. Shell operates all over the world, providing products such as petroleum, lubricants, natural gas, and petrochemicals.

Bp has franchises all around the world. It originates from the founding of Anglo Persian Oil Company in1908, which was a peripheral of Burmah Oil Company to exploit oil discoveries in Iran.

Bp was the first company to ever discover oil in the epeiric sea on the European Continental Shelf ‘the North Sea’. It was privatized by the British government between 1979 and 1987. Bp then amalgamated with Amoco in 1998, becoming BP Amoco plc and obtained ARCO and Burmah Castro in 2000, becoming Bp plc in 2001.

Bp experienced a Deepwater Horizon Oil Spill in 2010 which was the largest accidental release of oil into the marine waters which had ripple negative effects.

Bp had to take accountability by pleading guilty to 11 counts of felony, manslaughter, two misdemeanors and they had to pay about $45 billion in fines and penalties, this was one of the largest criminal resolutions in the history of the United States of America.

Today Bp operates in many areas of the oil and gas industry, including providing petroleum, natural gas, motor fuels and aviation fuels. It is the company with the world’s 12th largest revenue turnover and is the 6th largest oil and gas company according to the market capitalization (stock market).

Formerly known as the California Texas Oil Company, Caltex began in 1936. It was a joint venture between the Texas Company, later named Texaco and Standard Oil Company of California later named Chevron Corporation, to market oil from newly established businesses in Saudi Arabia which needed adjustments. It was renamed Caltex Petroleum Corporation in 1968.

The two umbrella head companies amalgamated in 2001 to form Chevron Texaco formerly known as Chevron in 2005 and Caltex remains as one of it.

Sasol Limited is a company that was formed in 1950 in South Africa to hold the countries assets of coal, oil and gas as well as its appendages, protected by the government during the apartheid era.

This research task will be unraveling and dissecting what consumers are thinking before making a choice to head to a particular petrol station. It will be evaluating factors that influence their choices of either Bp, Caltex, Engen, Shell or Sasol, across the whole spectrum of the Gauteng area. The researcher will use different methods and tools to gather facts as well as present information on findings.

Engen formerly known as Engen Petroleum was founded in 1881 in South Africa, its headquarters are in Cape Town.

Engen serves its services all around Africa, as well as the Indian ocean islands. Engen focuses on refined petroleum products, crude oil and the provision of extensive retail networks, operating its own logistic fleet.

In order to keep consumers returning on a regular basis, petrol station owners need to ensure that they hire staff members that are good with people and have good communication skills.

Petrol station owners can keep consumers returning on a regular basis by ensuring that they incorporate convenient shops that they look for at malls but can also easily access at the petrol station e.g. ATMs, car wash, coffee shops, bakery or even one or two fast food joints. The Engen garage in Parktown on Umpire road has a Wimpy incorporated on the petrol station premises as well as a car wash, makes it difficult for people that head out to the wimpy or car wash to forget that they need to pour petrol.

Petrol station owners need to keep their amalgamated shops open 24/7 so that those stranded after 12am don’t have to worry. E.g. Your car gets stuck on the road after 12am due to you forgetting that you needed to pour petrol, and it also happens that you are hungry during this whole ordeal. You can request an uber to the nearest petrol station in the area and when you get there, you can buy your petrol in a bottle, while waiting for it to be fully pumped, you can easily walk into your desired stall in the shop and buy your desired food.

Deliveries of petrol supplies for petrol stations should be done at night or in the evening when the sun has set to avoid petrol from evaporating.Methodology

This research task and the results provided will be obtained through primary research conducted and gathered through the use of a questionnaire and interview.

How do you handle unhappy customers?

There are many challenges faced. E.g. Goods that are portable, such as chocolates, bubble gum, etc. are stolen because they are easily attainable on the shelves.

– People run away without paying for petrol. They are often not caught because of the fake registrations they put on their cars as number plates.

– Challenges that we face that are stated above are often reported to the police but cases are never solved because there is not enough evidence and the culprits are often hard to find due to the fake registrations and fake identification.

– For things such as chocolates that are stolen and the culprit is caught, the petrol station manager often lets it go because they are tired of reporting minor cases that waste time, so they either give the culprit an option to pay for the item/items that have been shoplifted or leave the petrol station shop.

Yes, the petrol station can run without the manager around because when the manager isn’t around, lower management is in charge.

When there’s no petrol at the petrol station, the customer blames the manger for the problem.

When a truck delivers during the day, the petrol evaporates because of the sun and in most cases, petrol arrives shorter than what was prescribed. E.g. The Caltex garage orders 10 L of petrol, then the petrol is loaded on the truck in tanks from the deport to Gauteng, along the way, the sun is blazing hot, the petrol evaporates, by the time it arrives at the destination, there’s 9.98L of petrol in the tanks.

Total Petrol Station is a French multinational integrated oil and gas company founded in 1924 and one of the seven ‘Supermajor’ oil companies in the world.

Total operates in the Oil and Gas industry. It was known as the French Petroleum Company”. It had taken over Petrofina of Belgium in 1999, it was formerly known as Total Fina then. It then also acquired Elf Aquitaine first named TotalFinaElf after the merger in 2002, it became renamed back to Total in 2003. Total operates in a lot of countries all around the world.

Factors that influence the consumer's choice of petrol stations in the Gauteng area. (2019, Dec 11). Retrieved from https://studymoose.com/thato-mackade-business-assignment-example-essay 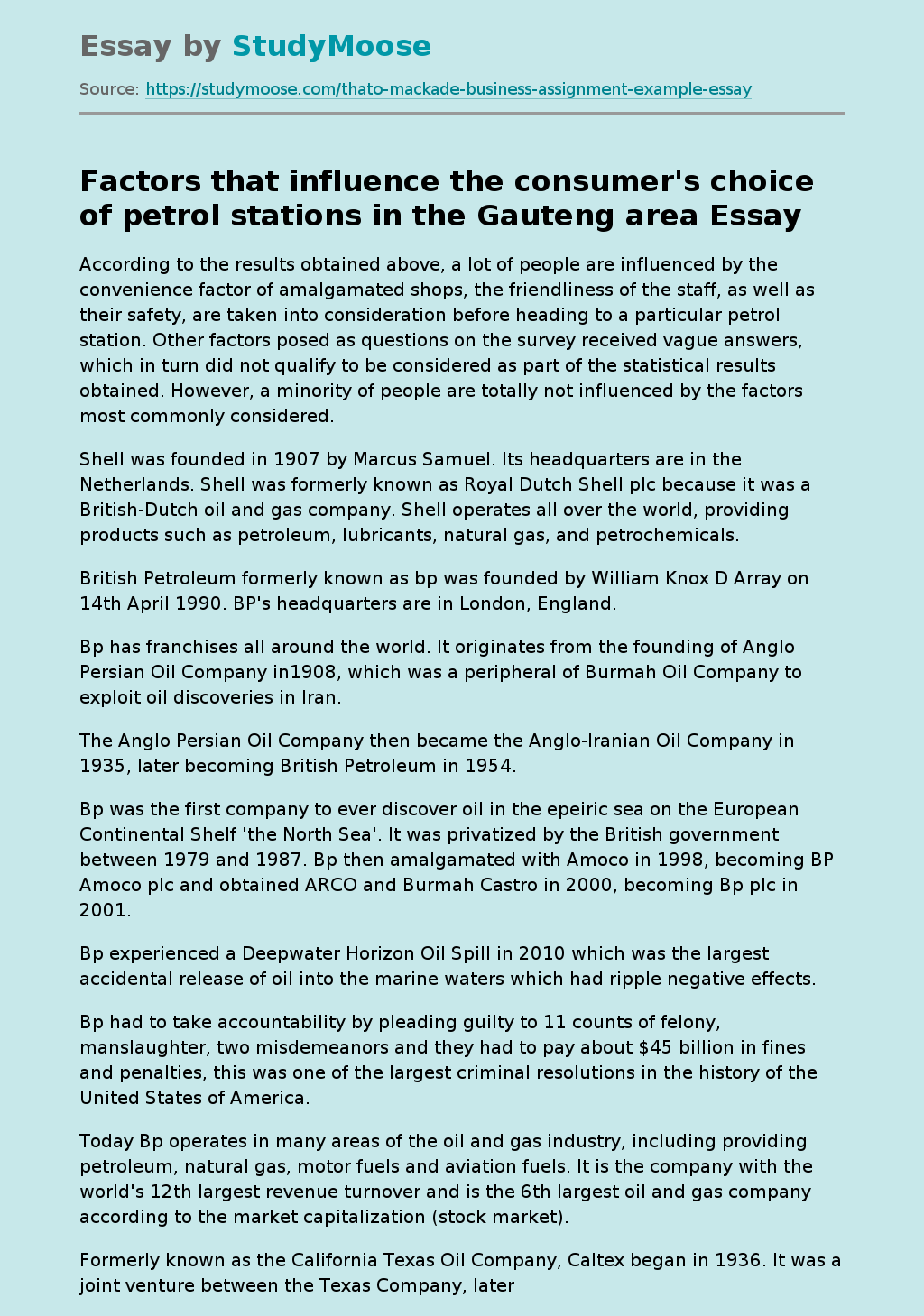