A party’s platform is a set of beliefs and values that a party supports or disapproves in order to appear to the general public. It is a set of principles that the said party supports and believes in. Most of the time, the platform of different companies have some similarities and as well as differences in their set of beliefs and viewpoints. This paper will try to analyze and study two political parties in Texas, the Texas Democrats and the State Republican Party.

Don’t waste time
Get a verified writer to help you with Texas Democrats and State Republican Party Platforms
Hire verified writer
$35.80 for a 2-page paper

I will try to state their similarities, differences and as well as what I think is their weak point.

The Texas Democrats and State Republican Party have several similarities in their sets of beliefs. Both platforms discusses the issue regarding rights in every aspect; personal, family, political and most of all the religious right of every individual. Both parties believe in the ability of the Texan to change their community. It is an important factor in order to have the support of the people in the community.

The people must know that their ability and importance is recognized by the party that they are to support.

Another similarity of the two parties is that they both believe that the power of the government is to be limited in order to protect the personal interest of the public. There should be limitations on the power given to the government to guard the rights of the people. It is also considered as another form of freedom that is to be manifested in the society.

Each party also approves that the individual rights of every person should not be violated or negotiated for any reason.

Both also recognize the importance and value of the people in the military in keeping America strong and able to protect the people’s interest, freedom and lives against those who wish to destroy it. Military people are also to be honored and recognize for their bravery in protecting the country. Both parties also believe in the value and importance of education in order to improve the society in terms of the economic and societal issues. It is an important factor for development and every citizen deserves to have good education whatever their statuses are.

Well I can say that the major similarity between the two is that they both love the country. Although they differ on the kind of approach and philosophies needed in order to make our country a better place to live, they both want the betterment of the country. Although there several similarities between the Texas Democrats and State Republican Party platforms, they also have some difference regarding their beliefs and stands in certain issues concerning the citizens and the country as well.

For the Texas Democrats, the main role that of the government is to ensure that its citizens are being responsible for their finances in the forms of requiring the people to contribute to things like retirement savings. Also the government should make sure that the companies under its jurisdiction are doing the right thing to its employees such as the payment of minimum wage. On the other hand, the State Republicans believed that the government should give emphasis and should be able to give punishments to whosoever commits an immoral act like using drugs. Rightful and responsible marriage is also given emphasis.

For the Texas Democrats, the main function of the government is to oversee and regulate the economy while for the State Republicans, it is morality that the government should oversee and regulate. If I were on the side of the Texas Democrats, one thing that I will use in the State Republican Party platform against them is their belief that it is the family’s responsibility to provide for their needs such as education and the like. Everywhere, things weren’t equal especially when it comes to the status and the ability of every family to support its members financially.

It is certain that there are those who are really unable to provide and support the needs of its members. Considering that fact, I believe that it is only right for the government and other institutions to help and stretch their hands in helping them. It is also of the governments concern and responsibility to provide and help those that are part of their jurisdiction and scope of power who are not capable of providing their own needs. The government as well as other able institutions and groups should not close its doors for those citizens in the country.

On the other hand, if I were a Republican I will argue about the Democrat’s belief that a growing economy should benefit all, that “the people who work in a business are as important as those who invest in it”. I am not saying that that this idea is wrong, actually I also believe in it but it is a reality that this idea can never happen. We can all see the difference in the importance given to the workers and the owners/investors. This situation can never be changed because of the fact that the investors are always given a higher importance.

The workers can always be fired and changed while the investors are somewhat irreplaceable. The Texas Democrats and State Republican Party may differ in their sets of principles and beliefs but their goal, in improving the country and the state of our fellow citizen are similar. Still the success of any principle is its application. Rules and principles are worthless if those that are governed by it are not willing to cooperate and follow it. The betterment of the country still lies not on rules and principles but rather, on every citizen of the country. 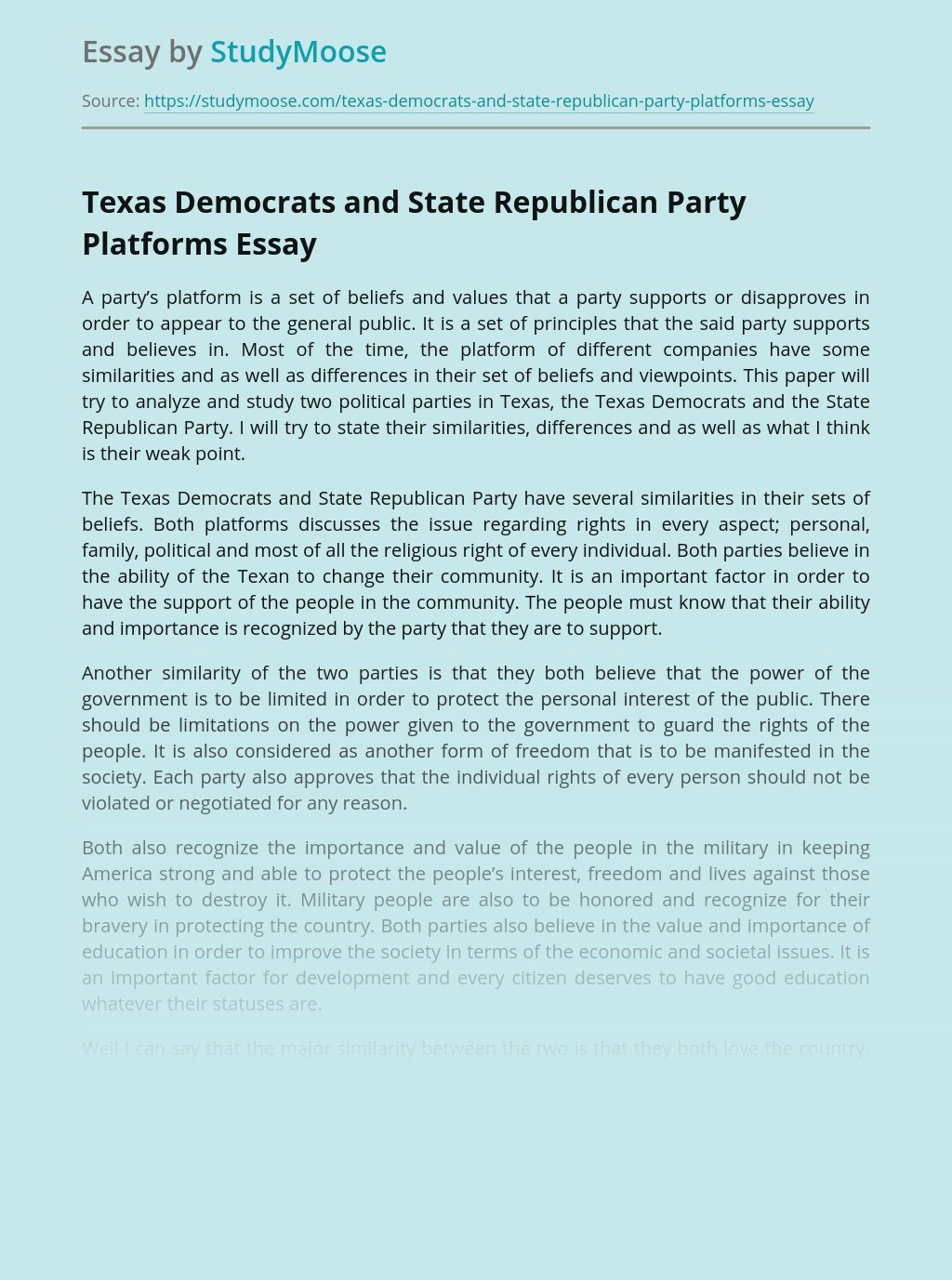