The purpose of the essay is to critically analyse a key organisational behavioral and/or human resource issue facing an organisation of our choice. The author will be looking at the important issues surrounding the fall and challenges of Tesco in China.

This essay is to show an understanding of the general cultural differences between UK and China by applying the cultural dimensions of Hofstede. It discusses the impact of these cultural differences on their management practice from five aspects: cooperative strategies, conflict management, Decision Making, work-group characteristics, and motivation systems.

Don't use plagiarized sources. Get your custom essay on
“ Tesco organisation culture ”
Get custom paper
NEW! smart matching with writer

As a result of Globalization, Tesco has opened companies in many countries in Asia like Taiwan and Japan, and is determined to succeed in the Asia Market. Tesco is one of the largest British supermarkets in the UK. Tesco opened its first store in china in 2004 and have struggled to make profit due to cross-cultural organizational challenges. It can also be observed that most of the failures faced by cross-national companies are caused by neglect of cultural differences.

The globalization of the world economy, on one hand, has created tremendous opportunities for global collaboration among different countries; on the other hand, however, it has also created a unique set of problems and issues relating to the effective management of partnerships with different cultures.

According to Hofstede’s six cultural dimensions, He defines culture as a kind of “collective programming of the mind, which distinguishes the members of one category of people from another” (Hofstede, 1980). He explained that culturally based values systems comprised six dimensions: power distance, individualism/ collectivism, masculinity/femininity, and uncertainty avoidance.

Cultural in Motivation system
According to Leung (1997), The method of distributing pay to motivate employees may also depend on cultural values. Pay for performance in western companies such as Tesco, and pay equity in Chinese companies.

Culture in Decision-making
Individualistic Western managers prefer making decisions individually or deferring to their supervisors instead of consulting with others. Western world have a low power distance culture, and they value personal equality and believe in decentralization and empowered subordinates. But the situation in China is a little complicated. Some researchers propose that decisions are typically participatory in collectivistic-high power distance countries. Other researchers think that employees in those countries should readily accept decisions handed down by their supervisors, and even resist participation in decision-making because of their unquestioning attitudes toward their supervisors. 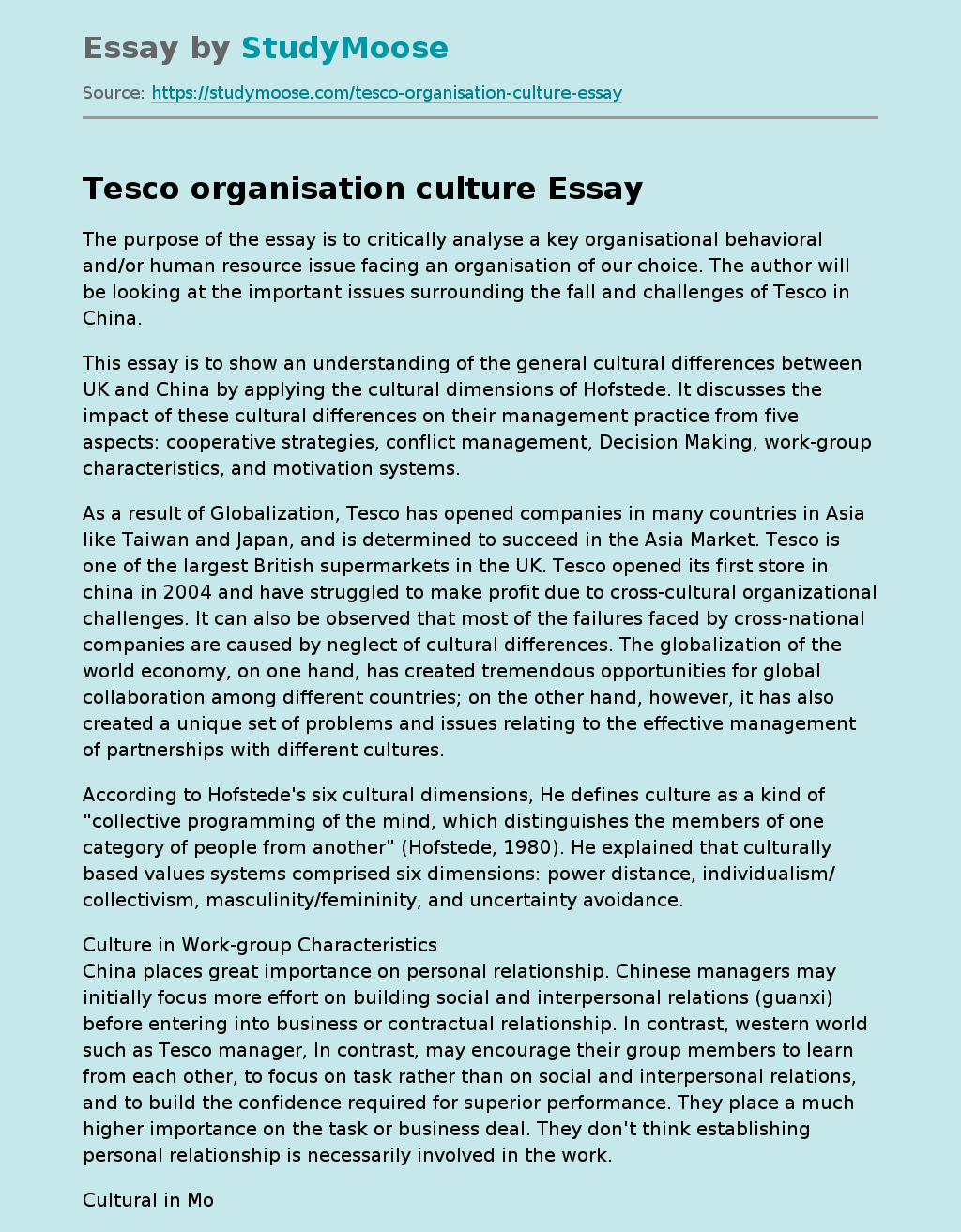