Terrorism has become a world wide phenomenon these days. What precisely do the terrorists prefer to call themselves when they gain nothing by attacking common, innocent people whose death or maiming does not better the strategic or tactical position of terrorists. Common man begins to hate them and is ready to denounce them as soon as he thinks it safe. Thus terrorism becomes a social evil. Terrorist acts can hardly help their perpetrators towards realizing political plans and programmes. Unless, of course, the terrorists are funded by outside powers that have no considerations and sympathy for their slated cause but are interested in destablilising the victim nation.

Don't use plagiarized sources. Get your custom essay on
“ Terrorism The Social Evil ”
Get custom paper
NEW! smart matching with writer

Today, those governments which support terrorism in adjacent areas and think that the result would develop into a Vietnam like situation, are heading for rude disillusionment. Terrorist groups have usually sought to justify their cowardly attacks on uninvolved persons and destructions by claiming that it is done for the “patriotic purpose of freedom and sovereignty” Debate has often tended to centre on ways of looking at it.

In fact, crime by one is considered as a revolution by the other. This appears to be more and more of non-sense.

The killing, maiming and kidnapping of innocent and unconcerned persons in terrorist act, such as recent bomb blasts in Delhi, is just plain crime. United Nations has also now given its seal of authorization to this view. The bomb blasts are in addition to terrorists killing by gunfire and destruction of places of worship. There is no reason for the killings other than, apparently, to create panic and instability in the local administration.

Innumerable killings by gunfire or bomb explosions have taken place in Assam, Jammu & Kashmir and in other parts of the north – east, and various other cities. The evil of terrorism has grown basically in two kinds namely political terrorism and criminal terrorism. Political terrorism seeks to achieve its political gains by spreading panic and creating fear in the hearts of people on a large scale. Their ultimate aim is to get political power through there muscle power. Then there is criminal terrorism which indulges in extracting large amounts of money as ransom by kidnappings and hijackings etc. Very often it is found that terrorists have received their training and guidance in using various weapons from various terrorists outfits.

Terrorists operating in Punjab were found to have all training, weapons and other forms of material assistance from a neighbouring country. Also all terrorist groups, which are active in Jammu & Kashmir, receive their assistance in all respects from an adjoining country. The unity and integrity fo our country has always been threatened by the forces of terrorism. For dealing with terrorists, our government passed the Anti terrorist Act which provides for deterrent punishment for terrorist acts. The Act has also provision to punish anyone indulging in “disruptive activities” which may lead to harm the sovereignty or the territorial integrity of our nation. The use of religious places for political gains, for taking shelter by anti-social elements and for creating communalism has also been prohibited by enactment of laws. Terrorists actually continuously change their hide – outs and their tactics to prevent arrest and punishment.

Even if they get arrested they try to commit suicide using poisonous capsules or they are killed by their own associates so that, no information is passed on to the police under severe punishment. The law enforcing agencies alone cannot curb the acts of terrorism. To remove this social evil, terrorism needs to be controlled through negotiations to usher in an era of co-operation instead of confrontation. The UN General Assembly also adopted a twenty – four article International Convention for the Suppression of Terrorist Bombings by means of a resolution : “Criminal acts intended to provoke terror in the general public or a group of persons are unjustifiable, whatever be the considerations political, religious, ethnic or ideological. To tackle the problem of terrorism in India, it would be worth while to identify its causes in order to work out a strategy.

It is observed that terrorism is direct action not for achieving something but for quenching the fire of vengeance against those who are responsible for their misery. A conciliatory approach is the need of the hour. Confrontationist measures will not solve the problem in our contry. It is essential that the warm – blooded youth, especially those who have a tendency to take to terrorism must be involved in decision making processes. There should be quick and right decisions. No injustice should be done with anybody. Good examples of honesty and integrity will have to be set forth by the leaders themselves. Their actions must be faithful and above board in order to inspire confidence in one and all. Our whole educational system also needs to be restructured and streamlined. It should use each ounce of energy of youth for constructive purposes so that they may not be induced to adopt violence as their creed and dead. 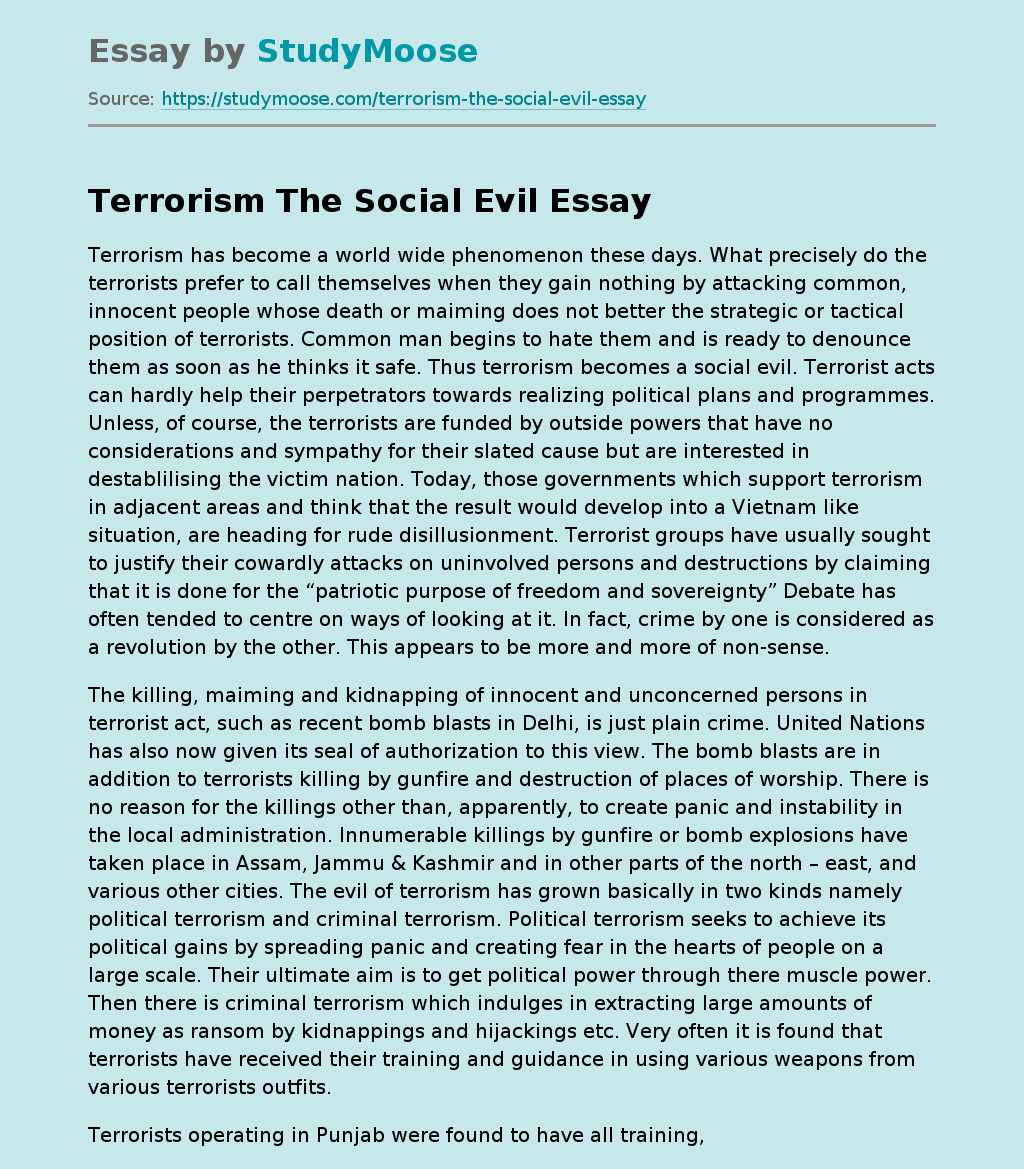