Terrorism in Pakistan has many causes and effects. The root causes are religious extremism, war in Afghanistan, poverty, social inequality, and illiteracy. Some of the main effects are bombings, killings, and assassinations especially of police and military personnel, damage to tourism, and a bad image to the country. Religious extremism is caused by Madrasas (a school and hostel attached to a mosque in which religious teaching is given). The effects of these are terrorism, bombings, and killings. Here is an example of religious extremism.

Don't use plagiarized sources.
Get Your Custom Essay on Terrorism in pakistan Just from $13,9/Page

The terrorists of Lal Masjid wanted to make their own Islamic Government and would not listen to anybody. So, a military operation was done by the Pakistan Army.

Many people were killed in the mosque. Poverty, illiteracy, social inequality too are causes of terrorism. All these have made the poor of the northern areas unhappy with the government and other rich people. Because of this unhappiness, many poor people have become terrorists. Pakistan is with America against the Taliban.

The effect of this is that the terrorists of Taliban have also started attacking Pakistan. As a result of terrorism, Pakistan has got a bad image and most of the foreigners have stopped visiting or have left this country. Therefore, in this terrible time we must have good leaders in this country. The leaders we have do not control the country well enough. To improve the situation, we need to get rid of these leaders who think of themselves more than the country and its people.

Pakistan has the most terrorists.(kashmir.net) 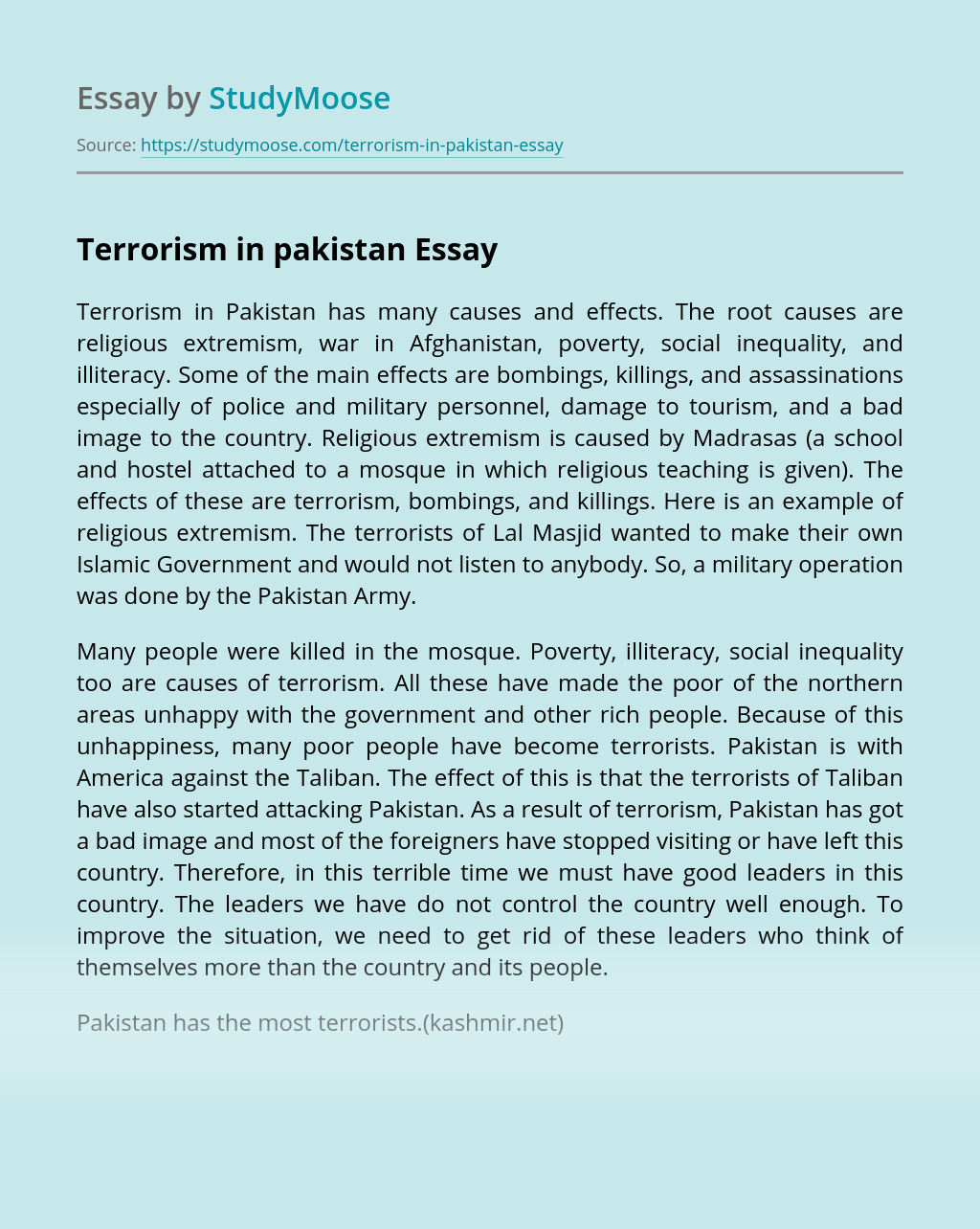 The article initially provides a brief overview about current political situation of Pakistan. Pakistan is a developing country and it is politically unstable but we live in the world where everything is possible. Democratic governments have always failed to complete their tenure which eventually results in a long lasting dictatorship reign. In Pakistani politics, there...

Private and Public School in Pakistan

Schooling from the very beginning is the first priority of every parent. Private schools in Pakistan have increased their number in no time, because the parents have completely inclined themselves towards the private schooling. Numerous reasons are there, but the few prominent ones are the quality of education and security. It is obvious that when...

Get Essay
Problems of Pakistan

How Does Changez Change in the Reluctant Fundamentalist?

“I had actually changed; I was looking about me with the eyes of an immigrant.” How does Changez alter throughout the novel? The Unwilling Fundamentalist discovers two stopped working love affairs, one with a person and the other with a country. Changez – the dazzling kid from Lahore, who was raised in a utopian background...

Culture and Components of Culture Culture Culture is the behaviors and beliefs characteristic of a particular social, ethnic, or age group In the 20th century, “culture” emerged as a central concept in anthropology, encompassing the range of human phenomena that cannot be attributed to genetic inheritance. Specifically, the term “culture” in American anthropology had two...