Tension Between the Police and the Public

Recently, there has been a lot of tension between the police and the public. There have been numerous reports of police members abusing their power by discriminating against civilians, and there has also been numerous attacks on police by various outraged groups. In order for the police to be successful in their duty, they need to be trusted by civilians and competent enough to do their job regardless of their own personal feelings. The service and civilians would desperately like a solution to this problem, but right now nothing has worked.

Don't use plagiarized sources. Get your custom essay on
“ Tension Between the Police and the Public ”
Get custom paper
NEW! smart matching with writer

Recently, there have been many conflicts between the public and the force. From allegations that police officers have been abusing their power to serve their own agenda, to peaceful demonstrations turned violent, the mutual trust that should be there between the 2 communities has been strained. Many experts believe body cameras can re-establish this trust. A recent study done by the Journal of Quantitative Criminology says that when police officers wore body cameras, “the number of complaints filed against officers dropped from 0.

7 complaints per 1,000 contacts to 0.07 per 1,000 contacts”(Ariel, B) . This shows that when police officers wear body cameras, they monitor their actions as they are aware that any infringements will be recorded. Even more impressive, a year long study from 2014 to early 2015 “conducted by researchers at the University of Cambridge of nearly 2,000 officers across the UK and the U.S., [found that] the use of body-worn cameras was associated with a 93 percent reduction in citizen complaints against police” (Police body cameras are not a public safety panacea). While the first statistic is a relatively minor shift in complaints, this one is not. The cause of the massive difference between the two statistics may be the locations, as the U.S is known as one of the leading areas in police distrust. These statistics help demonstrate that if body cameras were established for the police in North America, more trust would be garnered between the two communities, and better policing can be done as a result.

A further reason why body cameras are becoming a highly debated topic is their potential impact for court proceedings. Court cases are usually a long and tedious process, but that is the way justice must be handled to ensure a fair ruling. However, there are cases where an unfair ruling was reached because of a lack of significant evidence or accountable witnesses. Many think that the solution may be body cameras, like the magazine India Safe, which is quoted as saying that “the use of body-worn cameras is expected to reduce the time for investigation, court time and various costs associated with criminal proceedings” (Body-Worn Video Surveillance in Law Enforcement), and there is a lot of evidence supporting this statement. In a lot of cases involving police dispute,there is a small amount of physical evidence to convict either side. This is partially why cases involving police discrimination on civilians occasionally lead to unresolved solutions. However, in a recent court case, there are accusations that two police officers murdered a helpless homeless man. While this case could have lead to a stalemate as the police officers would be the only ones testifying, this case is different; one of the officers was wearing a body camera. In an article dissecting the case and the implications body cameras can have. “David A. Harris, a professor of law at the University of Pittsburgh, said that with the video evidence, ‘it becomes impossible to deny some of the very basic facts.’ He added, ‘That means you start an investigation on an entirely different foundation.’”(Rojas, R). The addition of the body camera adds significant evidence to the case, and will lead to a more just solution.

Body cameras can also be used as evidence in cases where acceptable proof is scarce. As mentioned previously, there is usually little evidence for cases involving police officers breaking the law. While a reason for this is that the officer in question is usually the only one left able to talk about the incident, another reason is that the same officers, coworkers, and possible friends, would be responsible for gathering the evidence. This conflict of interest could lead to a lack of evidence, or none at all. Without evidence, the case relies solely on the testimonies of those involved, where one or more people testifying may be lying. This is part of the reason why many argue that police officers rarely get proven guilty. While this is a pretty big accusation, there is significant proof that this is a reality; Patrick Davis, executive director of the watchdog group Progress Now, in regards to the case involving the shooting of the homeless man is quoted as saying: “Without [body cameras], the officer would have faced another rubber stamp investigation and he-said-he-said grand jury reminiscent of Ferguson” (Rojas, R). He refers to the case in Ferguson where a police officer shot an unarmed, surrendering black man, and in his trial the police officer is freed of all charges.

Further proof of this comes from a study where almost 2,000 officers across four UK forces and two US police departments were given body cameras. Author Danny Shaw from the BBC writes that “The availability of footage of an incident has also helped police secure convictions, particularly in domestic violence cases where victims are sometimes reluctant to cooperate” (Shaw, D). Domestic abuse cases are notoriously hard to prosecute because both parties involved are usually reluctant to testify; the abused because of the psychological problems caused by being in an abusive relationship, and the abuser simply because they do not want to be found guilty. However, with the undeniable evidence that body cameras provide, it becomes all the easier to prosecute difficult domestic abuse cases, and difficult cases altogether.

Furthermore, body cameras can be used to discourage potential attackers from engaging. This applies equally to both sides, as police officers know that their every move will be recorded and civilians know that their actions could be used to convict them in court. As written in securityinfowatch, a magazine dedicated to the advancements in security, “The jolt of issuing a verbal reminder of filming at the start of an encounter nudges everyone to think about their actions more consciously. This might mean that officers begin encounters with more awareness of rules of conduct, and members of the public are less inclined to respond aggressively,” (Police body cameras are not a public safety panacea). Multiple sources reinforce this statement, ranging from Dr. Ariel, from the Cambridge Institute of Criminology saying “Once [the public] are aware they are being recorded, once they know that everything they do is caught on tape, they will undoubtedly change their behaviour because they don’t want to get into trouble.”(Shaw, D), to India Safe writing that “the technology is perhaps most effective in actually preventing escalation during police-public interactions, whether that extends to abusive behavior toward police or unnecessary use of force by police.” (Body-Worn Video Surveillance in Law Enforcement). While these quotations paint body cameras in a positive light, they prove little without statistics to back them up. Statistics for body cameras are relatively scarce, because they there has only been a few trials around the world; however the Journal of Quantitative Criminology recently did a study where they assigned experimental shifts for officers wearing the body cameras and control shifts for officers without. When going over the information the study provided they “found that the likelihood of force being used in control conditions [without cameras] were roughly twice those in experimental conditions [with cameras]” (Ariel, B.). This statement has massive implications, as it implies that civilians were engaging less frequently, and that the officers did not use unnecessary force. This statistic proves that body cameras will bring down the amount of force being used by both officers of the law and the people they’re supposed to protect.

Tension Between the Police and the Public. (2020, Sep 05). Retrieved from https://studymoose.com/tension-between-the-police-and-the-public-essay 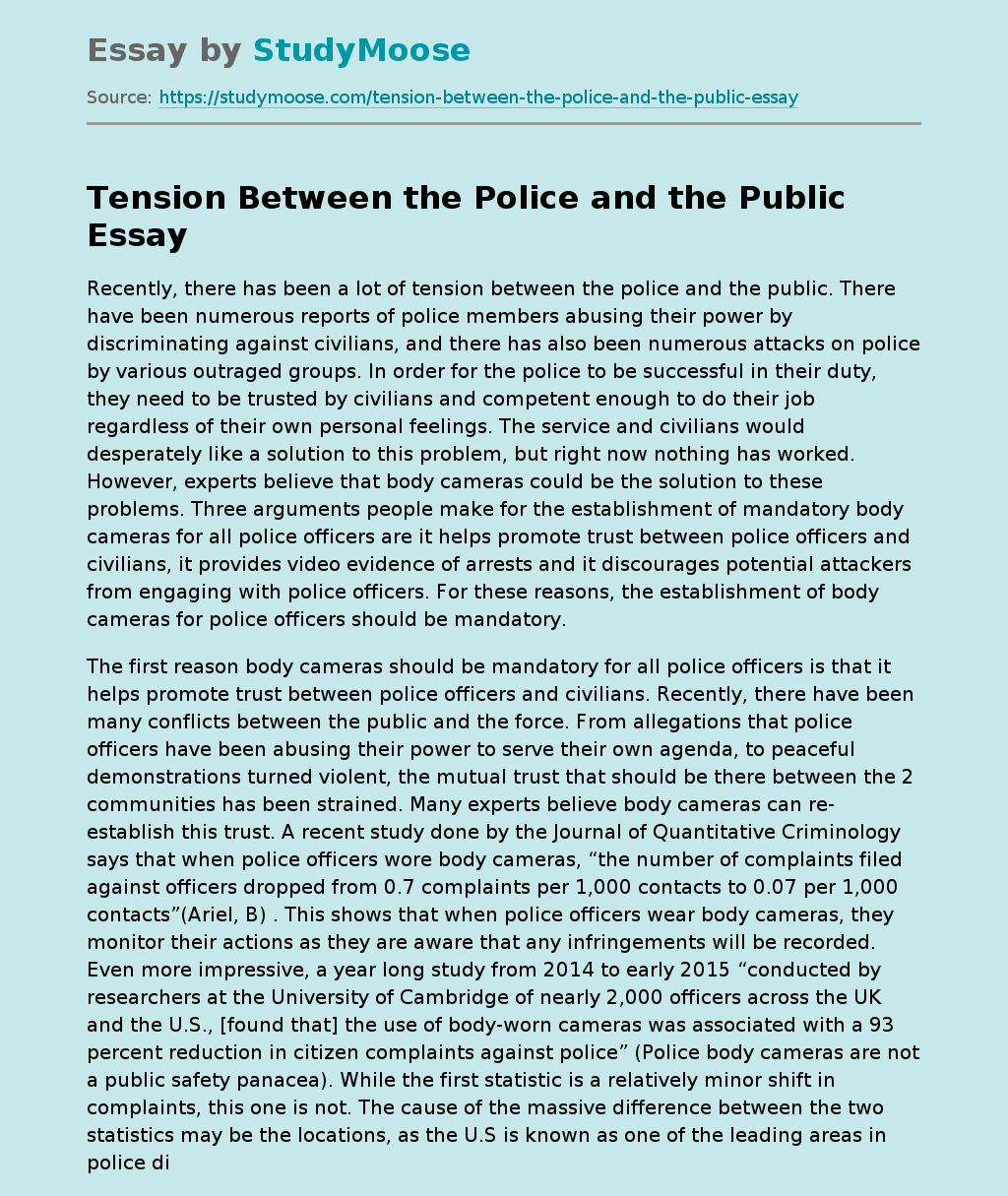