“Our normal tendency to listen to only those with similar value priorities needs our active resistance. We have to fight against the tendency.” (11) I completely agree with this statement. We should start into taking consideration on what others what to say. This is portrayed by many individuals such Malcolm X, Sherman Alexie, and Rita Mae Brown.

Malcolm X’s ‘Learning to Read’ covered about how illiterate Malcolm X was. He became frustrated at not being able to express on what he had to convey in his letters, especially those to Mr.

Turn in your highest-quality paper
Get a qualified writer to help you with
“ Tendency: Writing and Rita Mae Brown ”
Get high-quality paper
NEW! AI matching with writer

Elijah Muhammad. He fought against the tendency of being illiterate. Prison motivated him to further his reading and literacy. After months of reading many books, he became fascinated and it opened a new world to him. He had never been so truly free in his life.

Sherman Alexie demonstrated the quote by fighting against the values that Indian’s were put in. In Sherman Alexie’s essay, she stated “Indians were expected to be stupid.

”(Alexie 447) Many Indians lived up to the expectation, but some wanted to fight, like Sherman Alexie. She refuse to fail. She read many books late at night or until she could barely keep her eyes open.She loved books, but not only for the purpose to becoming literate, but to save her life.

Rita Mae Brown ‘Writing as a Moral Act’ says that speaking is a social contract. The unspoken truth is that we are unequal. All communication rest upon inequality. She fought against the tendency by portraying that language is the thread that will bring us to a form of agreement and understanding such as writing.

Writing to her is more treacherous and it displays more serious act than speaking. She said that the writers are the moral purifiers of the culture. Writers are gonna be the one who will spill the truth. 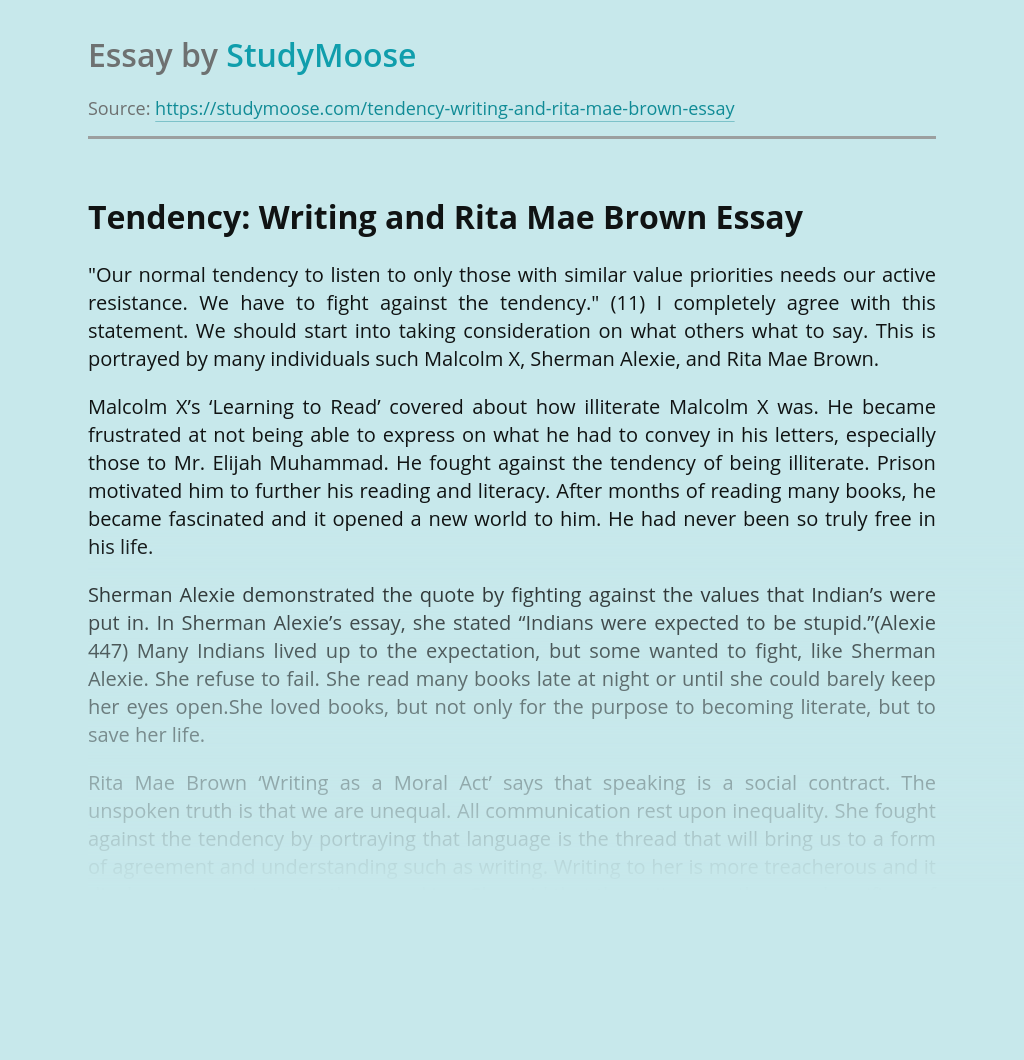 Turn in your highest-quality paper
Get a qualified writer to help you with
“ Tendency: Writing and Rita Mae Brown ”
Get high-quality paper
Helping students since 2015
Stay Safe, Stay Original