Mary Temple Grandin, a girl born in 1947, barely uttered a word until she was four years old. Although she was born with Autism Spectrum Disorcer, Temple used her autistic abilities as best she could, specifically the ability to “think in pictures,” to her advantage. For example, she expounded issues that were invisible to a neurotypical person. She is now a world renowned doctor of animal science, an activist for autistic people, and a professor at Colorado State University. She first became famous when renowned Neurologist, Oliver Sacks, mentioned her uniqueness in his essay “An Anthropologist from Mars” that was published in 1995 and made Temple an immediate sensation.

Don't use plagiarized sources. Get your custom essay on
“ Temple Grandin – Autism ”
Get custom paper
NEW! smart matching with writer

1. The film starts off with Temple visiting her aunt for the summer and working on her ranch. She becomes interested in a cattle crush, a device that hugs the cows to “gentle them”. One day, while having a panic attack, Temple places herself in the device and it helps to calm her down.

2. When Temple first attended college, she was very nervous when she moved into her college dorm. Temple had another panic attack in her room, but her mother gave her space by closing the door. Immediately after, her mother had a flashback to when Temple was little and had relentless tantrums. Before that, Temple was diagnosed with classic autism, a severe case of autism in which she seemed aloof, lacked eye contact, had no language, and avoided human affection and touch. 3. At this time, science classified autism as a form of schizophrenia, blaming mothers as the cause for the disorder and claiming that they were cold and aloof toward their autistic child, naming them “refrigerator mothers”.

The diagnostician suggested placing Temple in an institution. Temple’s mother refused to listen to the diagnostician and helped Temple adapt to the everyday world. Her mother hired a speech therapist, who worked one-on-one with Temple and enabled her to acquire language. 4. During Temple’s college years, she conceptualized the squeeze machine, which was designed for herself because she had a sensory integration dysfunction and disliked physical affection by people. The machine hugs both sides of her to calm her down, as she controls the pressure, and it makes her relaxed whenever she becomes tense.

Summary of the Film
(Continued):

5. Even though the machine worked, the school forced Temple to remove it, claiming that it was some kind of sexual device. Later after spring break ended, Temple and her aunt came back to school to persuade the school to let her use the device. Temple later proved through rigorous scientific study that the machine was only a calming device and, as a result, she was allowed to keep it. She uses this machine for self-medicating reasons ever since. 6. Later on, the movie flashes back to when Temple was just being admitted to Hampshire Country School.

She was expelled from her previous high school because a child taunted her and she hit him with a book. There, she meets a supportive teacher, Dr. Carlock, who encourages her to go further into science as a career and to eventually attend college. 7. Temple does indeed graduate from college and becomes a worker at a ranch. She rebuilds a new dip, and alters a slaughterhouse for cows so that it is much more humane. The film concludes with an autism fair convention, which Temple and her mother attend.

8. Temple speaks out from the crowd and tells the audience how she overcame her difficulties and was able to achieve academically, as well as how her mother helped her deal with the everyday world. The people become so fascinated that they request Temple to speak in front of the auditorium.

• Deficit in social communication and social interaction (must have all three)
• Deficit in social-emotional reciprocity (impairment in understanding of beliefs and desires or other mental states in themselves or others, failure of normal back and forth conversation)
• Temple can shake someone’s hand, however this is more of a routine/ trained
• Doesn’t understand girls and why they “go all goofy over boys”
• As a child, didn’t want to play with toys, but rather ripped paper (lack of make belief play)
• Lack of understanding of what the therapist is assuming when asking questions about the squeeze machine (“touching self” “release”)
• Not seeing her mother’s sadness when she leaves her in boarding school, just walks off
• Deficits in nonverbal communication used for social interaction (abnormalities in eye contact and body language, deficit in understanding or use of gestures, lack of facial expressions)
When aunt asks her what her happy face is and Temples displays an emotionless face As a child, doesn’t look at mother when she is talking to her Difficulty expressing herself (to the cattle owner, when driving into the stockyard) Claims she will “know how to speak with her eyes”
• Deficits in developing and maintaining social relationship (lack of monitoring of social activities of others, lack of social and emotional reciprocity, failure to share enjoyment and interests with others
• lack of desire for physical touch and what this represents in a relationship (never wanting mother to touch her)
• No friends at school because Temple doesn’t express any emotional response to what matters to them
• Not interested in playing with other children as a child • Never evidence of her trying to build relationships or engage with others (more of an introvert)
• Not understanding the relationships between other girls
• Restricted, repetitive patterns of behavior, interests or activities (must have at least 2)
• Stereotyped or repetitive speech, motor movements, or use of objects
• Use of squeeze machine to calm her down, control sensory input
• Has repetitive speak, peers called her “tape recorder”
• Excessive adherence to routines, ritualized patterns of behavior, or excessive resistance to change
• Her greeting is a form of routine and phrased the same way, gets distressed when doesn’t get the response she is expecting (at the slaughterhouse) • Will only eat Jello and yogurt (because of her anxiety)
• Gets very distressed when her name isn’t on the door like it is supposed to be
• Stressed when she doesn’t have a roommate when she is supposed to
• Highly restricted or fixated interest
• fixed interest on cows (way they moo, their clockwork)
• focuses on her experiment regarding the her squeeze machine and does poorly in school in response
• focused on specific things (wallpaper and chandelier)
• Building things (gate, her squeeze machine, mechanisms for cattle)

References
• Conn, C. (2014). Investigating the social engagement of children with autism in mainstream schools for the purpose of identifying learning targets. Journal Of Research In Special Educational Needs, 14(3), 153­159. 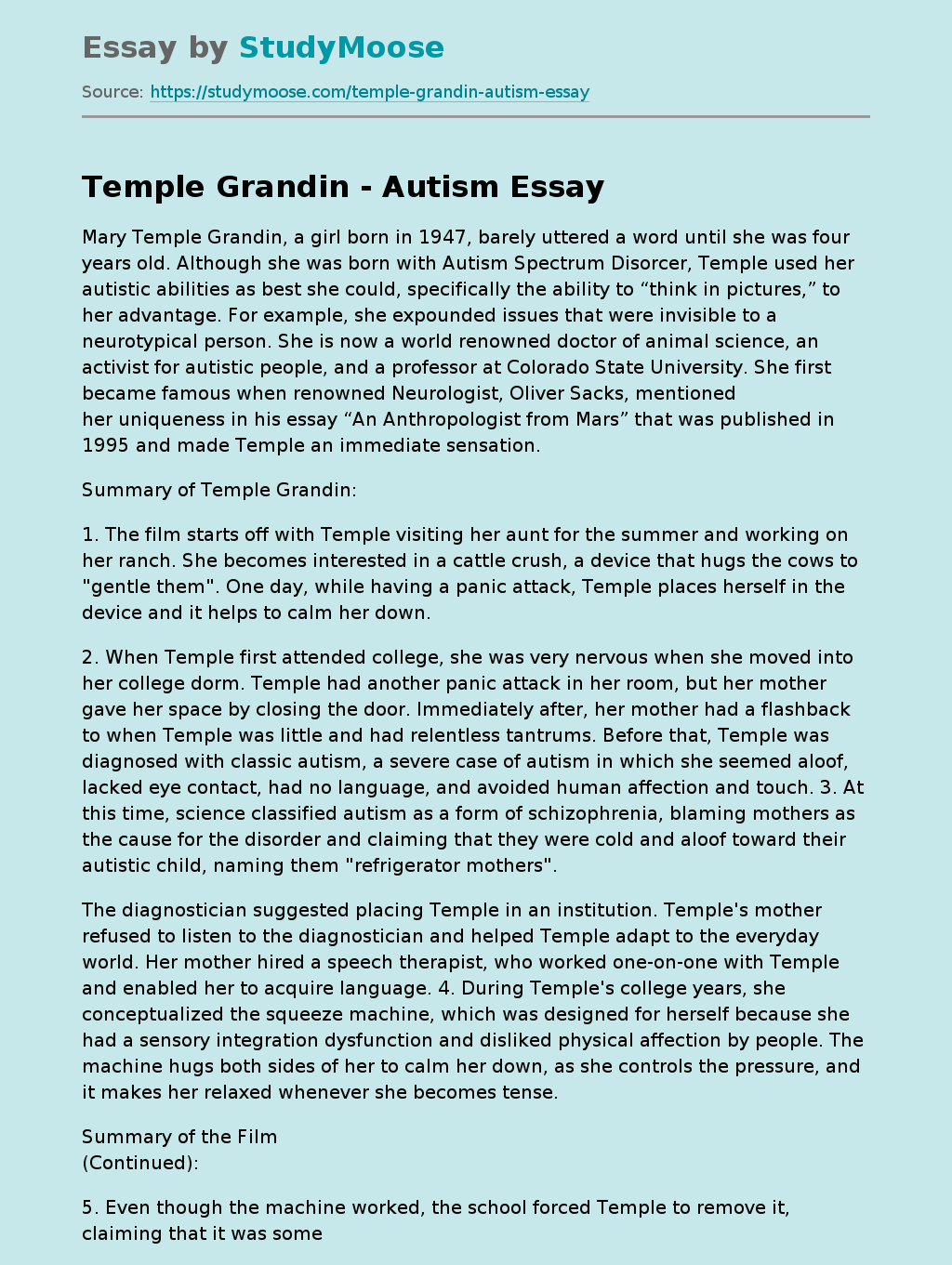