Television shows are an excellent way to make the audience feel a part of a story, and it also allows a person the opportunity to take their minds off of their own lives. Although watching television shows are an excellent way to pass time, there are some significant benefits obtained from spending some time engaged in a television show. Comedies, action / adventure, and documentaries are examples of three types of shows that can provide positive effects for a person.

One of the most important positive attributes of watching a television show is that it affords a person the opportunity to learn more about other cultures.

Very often, in American culture, we are so involved in our own society that we do not take the time to learn more about other cultures. Watching a documentary is an excellent way in which to broaden one’s mind and knowledge of those outside of our own nation. In addition, with the economy the way that it currently is, traveling to places outside of the United States is not a viable financial option.

Being able to watch a television show about other cultures is not only a learning experience, it is the next best method of traveling to that location and feeling a sense of getting away from one’s own daily life.

Another major benefit of taking the time to watch a television show is that if presents time for family members, of all ages, to spend time together. In our current society, individuals of all ages are so busy.

Parents are working to support their family and children are equally as busy. Many children are busy with their school work and after school activities, such as sports. Having time to watch a comedy or an adventure allows a family to gather together and laugh, talk and share. These are increasingly important as all members of a family struggle to keep up with the demands of their time. Taking the time to watch a television show means being able to have families talk, share, inquire, and most importantly, bond as a family.

A common misconception regarding television watching is that it is a waste of time. The above benefits illustrate just how far from the truth this statement is. As previously mentioned, our society has encountered many obstacles. These obstacles have become quite serious. The financial situation for many individuals has become dire. Many people have been forced out of their homes due to not being able to pay their mortgage. Just recently, the unemployment rate hit an all time high. Being able to take a small amount of time and watch a television show to take one’s mind off of their problems does indeed have significant physical and mental benefits. Evidence has shown that a person’s blood pressure can be lowered by watching thirty minutes of a television show. Additionally, a person who is able to loose them self in a television show is able to have a mental break which, in turn allows the chance to be recharged, both physically and mentally.

One final benefit of watching television is that it is a free source of companionship. Many people who live alone become quite lonely and depressed without someone to talk to or without having the sound of a another person’s voice in their home. The elderly are a prime example. Many elderly people who live alone become very lonely and this leads to depression. This depression can become very severe for those that may not be able to leave their home due to physical reasons. Also, for many elderly that live in climates that get sever cold weather, and ice and snow, being home bound can lead to very serious depression. Having the television on and listening to a television show provided very needed companionship for many elderly individuals.

Watching television is not a waste of time for so many reasons. Lowering a person’s blood pressure, providing companionship, being able to avoid depression, teaching a sense of values or teaching an important life lesson are all benefits that can be obtained from spending some time watching a television show. Not to mention being able to learn about other cultures and experience places that one would not otherwise be able to visit is another added value of watching television. When it comes to the topic of watching a television show, whether it be a comedy, action-adventure, or documentary, it is important to keep in mind the significant benefits that time in front of a television can bring, not only to an individual, but to an entire family. 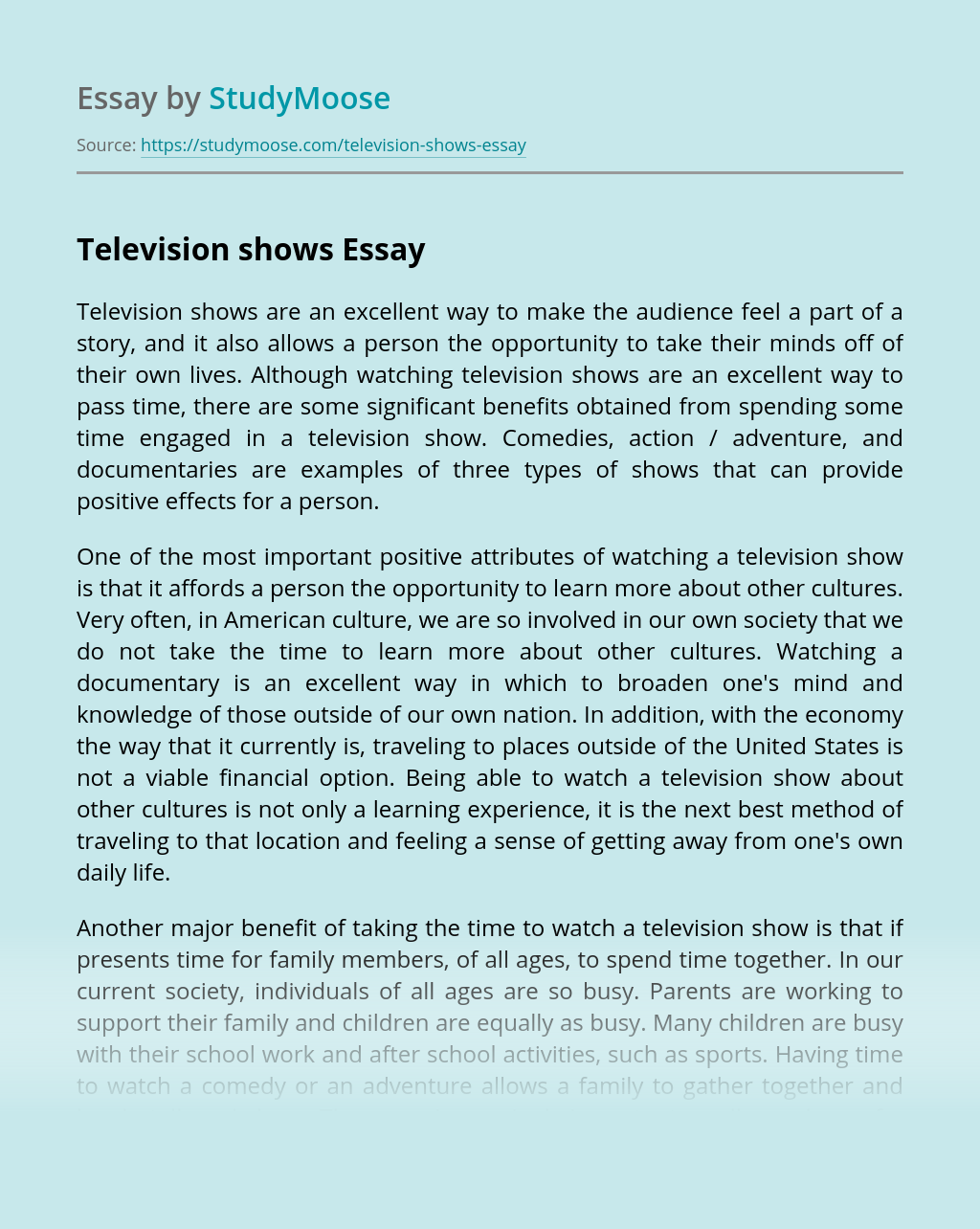