“Teen pregnancy is commonly defined as a pregnancy by a woman who has not reached the age of majority in her country” (Qtd. in Reid 828).Sub-Saharan Africa is the country that has the highest “teenage birthrate” in the world at 143 per 1,000women, and he United States has the highest “teen pregnancy rate” in the developed countries at 53 per 1,000 women and also has a high rate of “teenage abortion” (Reid 828). In recent years, teen pregnancy has become a serious problem in American because it has many negative effects for both mother and child, even the whole family and country.

Don't use plagiarized sources.
Get Your Custom Essay on Teenage Pregnancy Affects Just from $13,9/Page

First, it intermediately influences the teen mom on both physically and mentally. As Dr Arline Geronimus said, “The teens who choose to have babies are the poorest of the poor.”(Qtd. in Lewin). While the teenage bodies are not yet done growing, it has to ‘’bounce back’’ to deal with pregnancy, which cause “reproductive organs” and other parts of body can be inhibited (How Teenage Pregnancy Affects Development).

It is harder for teenage mothers to live in poverty and receive social support than their “counterparts” who do not have children.

Pregnancy also leads to low education because they usually drop out of school to take care of their babies or they can’t focus on their study while having a baby (Effect of Teen Pregnancy). It leads them to a dark future without a nice job to earn enough money and take care of their children. In addition, the teen mom usually has a “depressive disorder” because they afraid of everybody around them due to being a young mom, lacking of social support, and worrying about the future (Effect of Teen Pregnancy). The next person who is affected a lot from teen pregnancy is the baby. Teenage mother always lose her weight during the pregnancy because of stress, which leads to low birth weight that can causes many disease for the baby such as bleeding in the brain, weak respiratory , and intestinal problems (Effects of Teenage Pregnancy). While growing up in poverty with a teen mom, these children may tend to fail in school, to be criminals, and to become teen moms likes their mother (Teen Pregnancy). Moreover, most of these children usually lack the love from a father and feel strange themselves when they see other children who have both father and mother. Finally, it also effects to the whole family and country.

The whole family has to consider a decision: keeping or aborting the baby. On the other hand, worrying about the health of the young mom and new baby can cause stress for the whole family. Otherwise, it is also a big problem with the fee of giving birth for the family which doesn’t have high salary. In addition, the country which has high rates of teen pregnancies has a big problem on spending money helping young moms and their babies. For example, in American, “a group of scholars has calculated that taxpayers in 1996 spent nearly $7 billion to deal with social problems resulting from recent births by girls under the age of 18” (Homlmes). Teenage pregnancies have become a public health issue of negative effects on the teen moms, new babies, the whole family, even the whole country. Almost countries are trying to find a good solution for teen pregnancies; on the other hand, the first thing that they have to do is look at the causes that leads to this public problem.

Family structure is one of the factor reasons that lead to teen pregnancies. Rosen stated that “a growing number of American adolescent females lived in relatively unstable family situations and many became sexually inti­mate for a short-term sense of comfort” (Qtd. in Jones and Domenico 5). Families that lack of love can lead the teenagers seek for the relationships outside the family to feel better. However, the family that have both parents and have strong relationship with each other have been found to lower the incidence of adolescent pregnancy (Johnes and Domenico 5).Also, sex is always a forbidden topic in a family because not only the parents are shy to mention about this topic, the children also don’t like their parents to talk about their personal life. Besides, high school don’t have any sexual education to teach theirs student to understand and avoid pregnancy, Then they turn to ask their friends and receive wrong advices.

The second cause is peer pressure. The teenagers always avoid loneliness and want to be fit with their friends, so many teens engage in unhealthy activities so that their peers will notice them or that they may fit in the group. The teenagers usually pressure each other to have sex; for example, teen boys often pressure each other to have sex, and teen girls don’t feel as pressured by their girlfriends to have sex. They just want to have a cool appearance without thinking about the consequences. Teen can also become pregnant as a result of sexual abuse or rape. Farber (2003) found that “40% of girls who first had intercourse at age 13 or 14 indicated involuntary or unwanted intercourses with an older partner.” ( Qdt. in Jones and Domenico 6). According to Jacqueline L. Stock, “those who reported sexual abuse were three times as likely as those who had not experienced abuse to become pregnant before eighteen years of age”(Jacqueline). “Additional studies found over 65% of adolescent mothers had babies by men who were age 20 or older, implying that a higher number of adolescent pregnancies may result from sexual abuse than previously thought” (Qtd. Jones and Domenico 6).

Age of first intercourse is another cause of teen pregnancy. Today, adolescents have puberty earlier than the past, so they tend to encounter the first time sexual activity at younger ages (Jones and Domenico 6). There is no direct relationship between puberty and pregnancy, but if early puberty syndicates with peer pressure and lack of parental care, adolescents will make a wrong decision on having sex (Jones and Domenico 6).In 2003, According to National Campaign to Prevent Teen Pregnancy, “Between 1988 and 1995, the proportion of adolescent females who first had sex at 14 years old or younger practically doubled (Qtd. in Jone and Domenico) The causes seem like simple, but teen pregnancy is still a big problem until now. During the last half of the twentieth century, the government, community, and schools have been working so hard to find a solution for teen pregnancy. There are over hundreds of teen pregnancy prevention programs, so it is difficult for participants to know which the best program for them to use is (Jones and Domenico 7).

According to Tonelli , “Successful programs are characterized as being multifaceted, incorporat­ing not only abstinence, but also other topics including delayed sexual activity, life skills training, self-esteem, sex education, parenting skills, and contraception use” (Qtd. in Jones and Domenico 7). By using these programs, the rate of teen pregnancy have been decreased a lot, but there are still so many adolescents get pregnant every year, so this is a problem that we can’t solve in a short-term. “In the United States, teenage pregnancy is associated with poverty, poor health and social outcomes for mother and child, and amorality. Government interventions tend to be punitive and focus on deterrence.

However, once a teenager is pregnant, regulations and policies make it difficult for her to terminate the pregnancy” ( Qtd. in Reid 831). Teen pregnancy is not only the problem in the American, but it is also a big issue for almost of the countries on the world. Therefore, as a teenagers, students should be aware of the policy for teen pregnancy to avoid being pregnant. Parents and schools also need to support and educate teen about sex education. 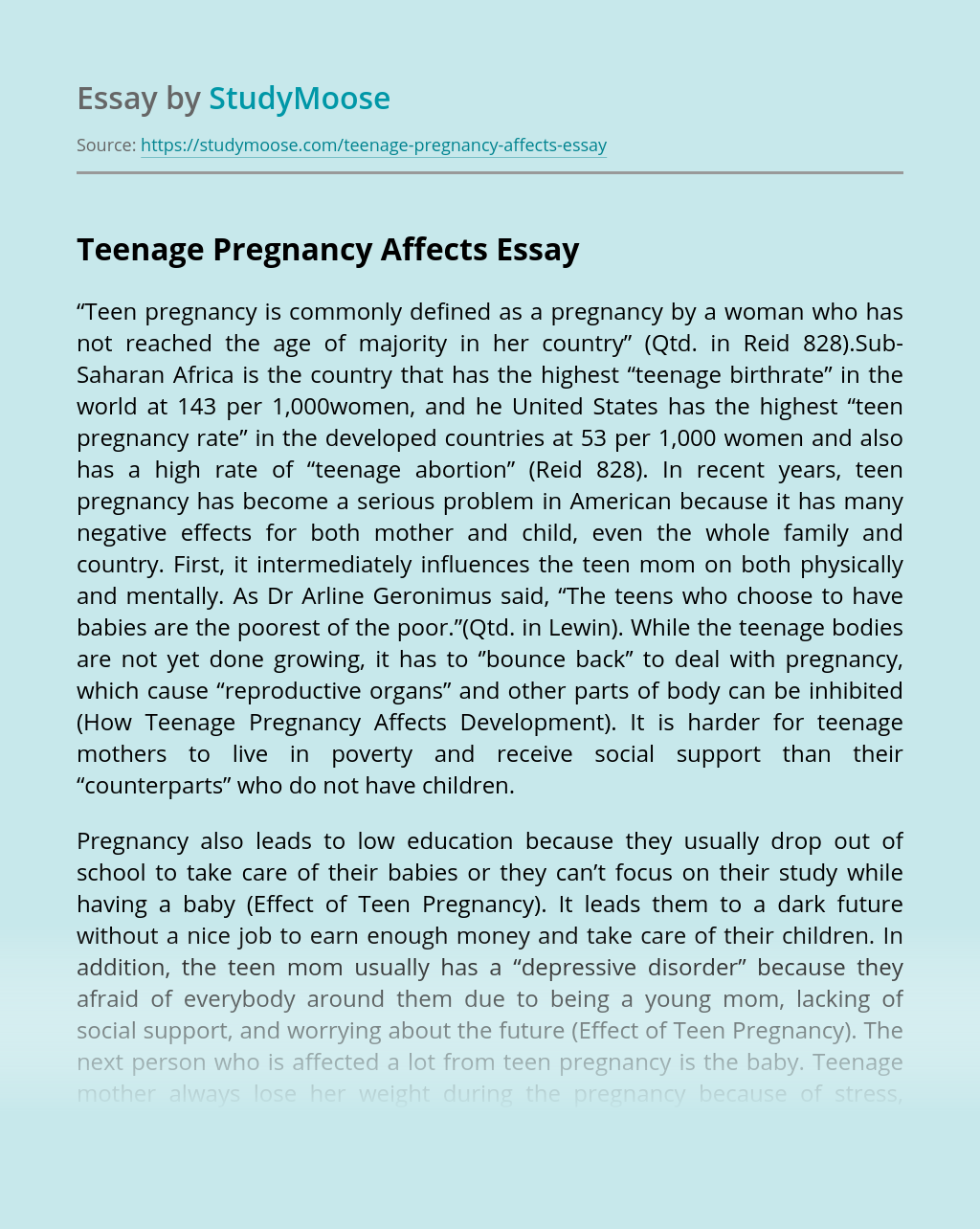 In the short story “Girl” by Jamaica Kincaid the author gives a perspective of the relationship between a strict mother and her young daughter. Jamaica Kincaid wrote series of sentences that sets the tone of the story to be uptight, oppressive, and informative. The author described her daughter into becoming a ‘slut’ which tells the...

Abstract Sex education is an important aspect for adolescents and crucial for their development. It is crucial for youths to learn about their sexuality and be able to make better decisions about sex. The sources confirmed that the topic of sex education is a highly debated when it comes to whether or not sex education...

View sample
Get Essay
Technology in Lives of Teenagers

There are things in our life that might not be easy to forget: a triumphant match, the first kiss from our love, a school reunion, and the first time we are wronged by our teacher or parents, a time we have to choose between our consciences and our desires, and so on. For me, those...

View sample
"A Property Of the Clan" by Nick Enright: Analysis

“A Property of the Clan ” unravels the death of a teenage girl at an underage drinking party and explores how the youths handle the situation. “A Property of the Clan” is not light entertainment, or an easy play to read. It deals with an ugly and disturbing subject, but does so in a thoughtful...