Teenage crimes as we all know are those crimes which are performed by people aging between 13-19 years old. These crimes are performed all over the world but unfortunately these crimes have been on the rise in Pakistan for the last 5 years. Our objective was to find out who are responsible for the increase in teenage crimes.

For this purpose we Conducted a survey from our fellow students also we interviewed a Deputy Supretendant of Police to get his views about this particular issue.

Don't use plagiarized sources. Get your custom essay on
“ Teenage crimes ”
Get custom paper
NEW! smart matching with writer

The results we found showed that teenage crimes are a reason behind many problems of our country and steps should be taken to reduce this as soon as possible otherwise condition of our country will become much worse because a country cannot develop without its youth. “The Youth of today are the future of tomorrow and a country cannot prosper and develop without the contribution of its youth”:- (Bill Gates)

Introduction
Teenage Crimes
Teenage Crimes or Juvenile crimes are those crimes which are performed by people whose ages are between 13-19 Years.

Expert says that the crimes performed by this age group are the most dangerous because the mind is not mature enough to know the full consequences. This age is the most sensitive as it decides the whole life of a person whether he will become a civilized person or a criminal.

Background
Peer Pressure:
Peer pressure is one of the factors contributing to delinquency among teens .Most of the teenage criminals belong to one group or the other .

Teen’s group tend to form a subculture that has a unifying theme of rejection of adult values .Teen’s peer group s usually exert a level of influence on their members to act in ways that may be antisocial .Usually teens get involved in such groups to get accepted in the society .Belonging to teen criminal group is often taken as a part of socializing. Poverty:

Poverty is often blamed for leading to crime, however underneath is something more vital – Society bombards us with commercial values, making us want more and more material things, to fulfill such needs one will do anything (including criminal acts) to get satisfied. Poverty is the main economic factor that plays a big role in teenage crimes .

A high rate of teenage crimes is seen in low-income communities .Teens who live in poor neighborhoods have significantly higher risk of engaging in teenage criminal activities than those who do not .they are also more likely to drop-out of schools, engage in substance abuse and progress to adult criminal acts. Media / T.V violence:

Another factor leading to teenage crimes is commercialized mass media and culture .For instance, watching violent movies and playing violent games may reduce the abhorrence of some teens toward brutal acts, making it easier for them to commit such offenses.

Also, the entertainment industry sometimes presents unattainable lifestyles to susceptible youths making it seem like the ideal thing to do .A commonly cited statistic says that a child watches 16,000 murders and 200,000 violent acts on T.V by the time the child reaches the age of 18. Exposure to Television violence makes children less empathetic to others, more fearful, more aggressive and accepting violence. Poor Parenting Skills:

Survey
Our Survey was conducted in FAST-NU. The age group was 18 to 25 years. We conducted our survey from 13 males and 12 females. Some of our questions were whether teenage crimes are on the rise in Pakistan. Majority of the people said yes. Another question was that what the biggest teenage crime is. The students had to choose from Abuse, Street Crimes and illegal drugs. The vast majority chose Illegal drugs as the biggest crime. Another question was that is it a social responsibility of the society to stop teenagers from crime. Majority of the people said yes. Interview

We conducted an interview from Deputy Supretendant of Police to get his views on this topic. Some of the questions which were asked were Are Teenage crimes increased or decreased in the Past five years? There is no doubt in this that teenage crimes are on the rise in Pakistan over the last five years What is the cause for this increase?

The main cause is poverty. Media also plays an important role. When a child watches violent movies his mind does not understand the consequences of doing it in the real world. What is the government doing about this?

Our Government Does not understand the gravity of this situation. Other than making a useless department who is doing nothing the government has not taken any major steps. In your opinion what steps should be taken?

The government should make a clear policy about this because this is the youth we are talking about it’s a major issue. Also the media is a great pillar of power for conveying a message. They should also play their role. But the biggest role is of the parents they should up bring their children in such a way that they should not go towards the wrong path.

Conclusion
After conducting the survey and the interview we came to conclusion that teenage crimes are a vital issue in our country. Teenage crimes should be considered seriously because it is that period where the mind is immature. So we should “Nip the Evil in the Bud”

Because these habits will become permanent with time and then it would be very difficult to correct them. Our beloved homeland is in great danger and its only hope is the youth of this country. So we should do everything in our power to stop this. As Kurt Cobain Said “The duty of the youth is to challenge corruption as they themselves make their own future”

Bar Chart of the Questionnaire 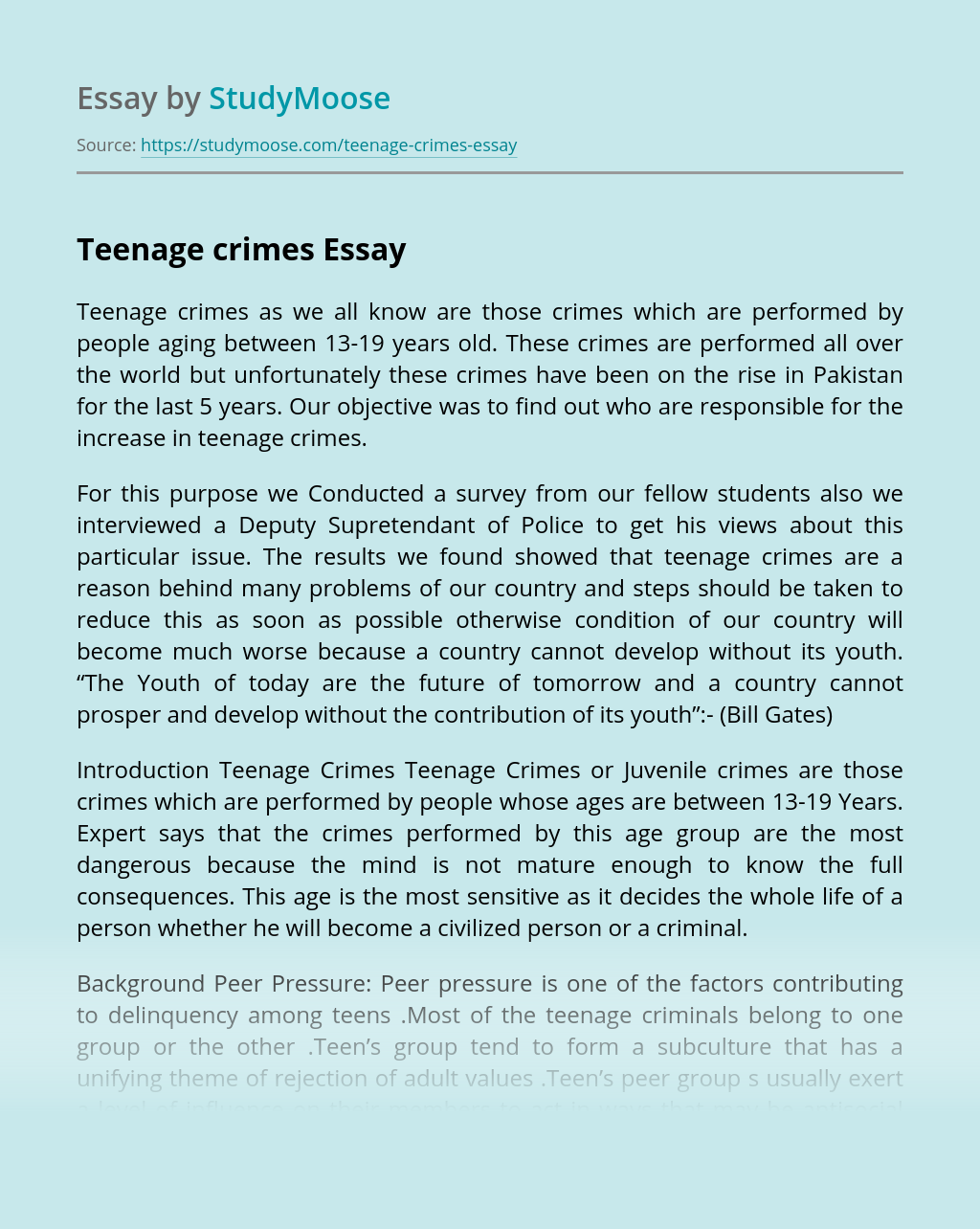