Teen Suicide Prevention: What To Know

Suicide is the death that’s caused by self-directed violence with an intention to die. The available statistics don’t represent the actual evidence and the actual rates of suicide as it’s underreported for a number of reasons and these rates are not reliable as they are subjected to error from variation in the definition of these cases (Miniño, 2015).. The accuracy of suicide statistics has been questioned to the extent of leading some of the authorities to sack their usefulness in epidemiological research.

Don't use plagiarized sources. Get your custom essay on
“ Teen Suicide Prevention: What To Know ”
Get custom paper
NEW! smart matching with writer

This inaccuracy is sometimes caused by the family, culture and the environment as they sometimes tend not to give the actual cause of death in the cases of overdose, poisoning and drowning as a cause of death (Jiang, 2015). Statistics have shown that male suicides rates are higher and the attempted suicides are more in female than in male (Freeman, 2017)

Non-suicidal self-injury is the body harm without a suicidal intention. Suicide attempts and attempted suicide are always treated as the same behavior in the research and in practice.

The scientific literature shows that there are several potential causes of suicide among teens. Depression which is the most serious problem among teens is the most significant factor for biological and psychological risk among teens (Twenge, 2018). Alcohol is also a widely used substance among teenagers and it’s related to suicidality which is the occurrence of suicidal thoughts or suicidal behaviors and depression among the teens. Research also shows that substance abuse and mental disorder are the most important risk factors in the attempted and completed teenage suicide (Martin, 2018).

However, suicide can still be prevented among the teens and other ages at an early age, according to (Sarchiapone, 2017) the need to implement the school-based programs teaching on the adolescent adaptive coping responses and the skills for solving the problems. This will enable them to effectively handle the problems and the stresses that typically affect the adolescence. These programs should directly target the specified risk factors like the use of alcohol and depression as they are the main impact on adolescent suicidality (Zalsman, 2016).

Teen Suicide Prevention: What To Know. (2020, Oct 02). Retrieved from https://studymoose.com/teen-suicide-prevention-what-to-know-essay 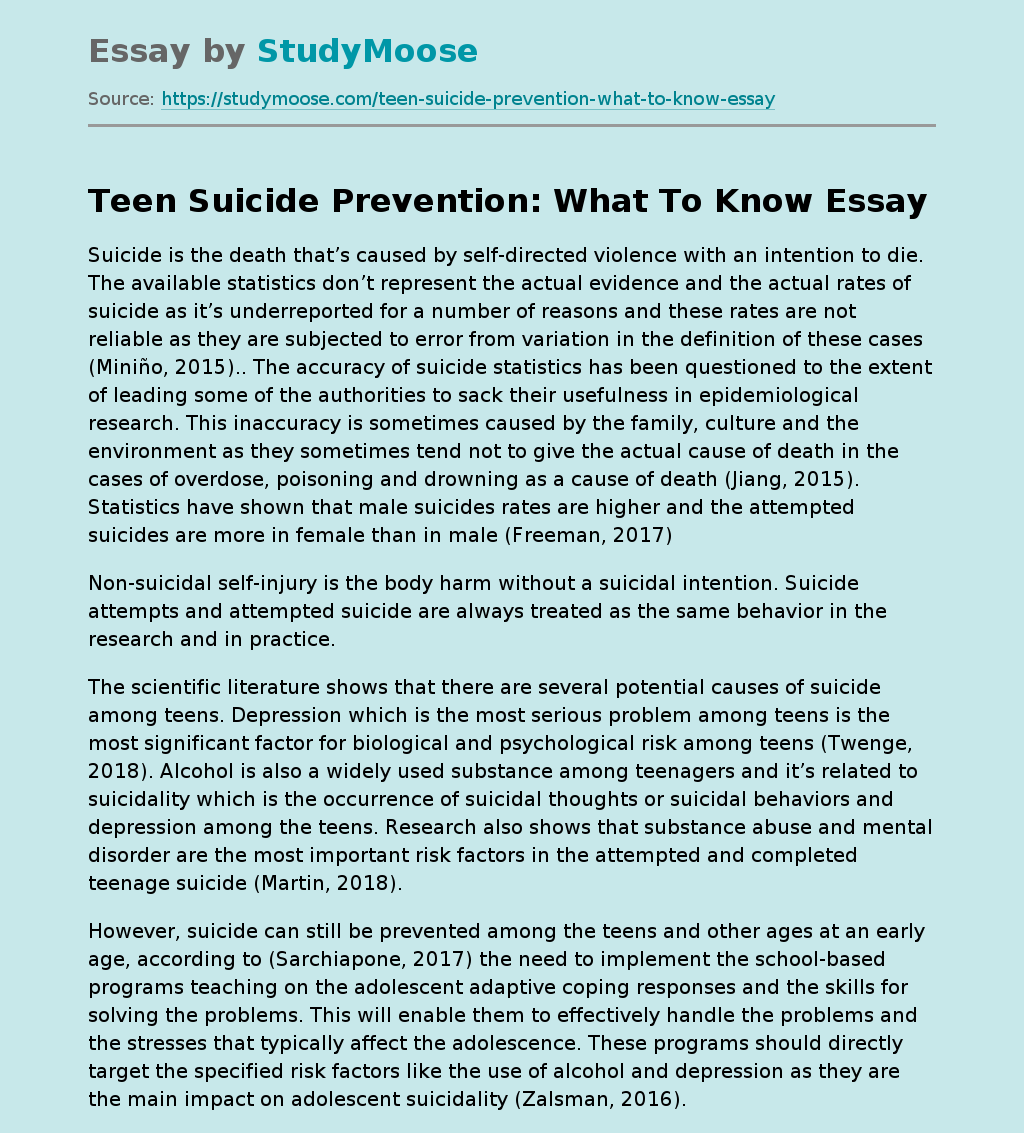