The video “TED Talks: The Official TED Guide to Public Speaking” uploaded by Talks at Google, which is an interview with Chris Anderson, the curator of the TED conference, is all about being a good public speaker. They have talked about lots of different concepts on public speaking which is really intriguing and interesting. For being with TED since 1998, Chris has encountered many kinds of public speakers in whom he came to learn a lot of new ways to be good in public speaking.

Don't use plagiarized sources. Get your custom essay on
“ TED Talks: The Official TED Guide to Public Speaking ”
Get custom paper
NEW! smart matching with writer

It is a very remarkable interview as it does not only impart plenty of significant ideas that can help the audience become good public speakers themselves, but Chris also give off the excellent public speaker vibe as he conveys his thoughts. I think that he really hit the part where he said that there are speakers who are really talented and can use all those magnificent words to get their audience’s attention, and there also are those speakers who are having a hard time to convey their thoughts well, but it is only about how we deal with the topic we have and what strategies we use in order to connect with the audience.

It is somehow difficult to get your audience’s attention for a whole conference as we can observe that people have a lot of distractions along with them. I agree when Chris said that the deal between the audience and the speaker is that the audience has to try their best to pay attention into what the speaker is saying, but speakers need to be responsible enough to guarantee the audience that what they are about to convey is worth the while.

People, especially those who are in the business area are known to be conscious about how they spend their time, and public speeches can be one of those events that can be worth their time, or be one of those that are considered as a waste of time. In my opinion, speeches have to be prepared very well along with a good public speaker in order for it to catch the attention of the audience. A speaker has to come on stage equipped with a purpose of giving knowledge that can be considered as a gift for their audience.

Not all of the information that speakers impart are acknowledged by their audience. Chris claimed that people are very cautious with the information that a stranger gives, as it is normal in a public speech that an audience has no personal connection with the speaker. He said that knowledge is not something that you can push in a person’s mind; it is something that has to be pulled in by that particular person. It seems that knowledge will never be recognized by our brain without our permission, which is why we only gain knowledge that is acceptable to us.

There are some speakers who only present themselves to the audience in order to promote their own, brag about something, or just to get attention and that is a total turn-off. It is mentioned during the interview that the moment audiences feel that speakers are only on stage for self-promotional purposes, they immediately lose interest. We cannot deny the fact that if we think that a certain speech will help us gain something, we start to have interest in it. Moreover, if we can feel that a topic is something that we can relate and the speaker is conveying it in a manner where we find it very useful for ourselves, we start to build connections with the speaker and get to internalize the knowledge we received. Of course, it will always be about the strategy on how speakers would relay their point to us.

Chris said that people crave authenticity in public speeches. What people want is to witness different skills, strategies, standpoints, and speaking styles for public speakers, which is also very agreeable. If we get to witness the same things in public speaking all over again, we tend to find it boring and lose interest, but if we get to witness a variety of different concepts, we tend to attain enthusiasm. In addition, people cannot oppose the reality that we are easily attracted to new things.

During the interview, Chris Anderson imparted plenty of ideas about public speaking which can be very useful to everyone. I would highly recommend the video to those people who want to know more about what really is the essence of public speaking and how it works. 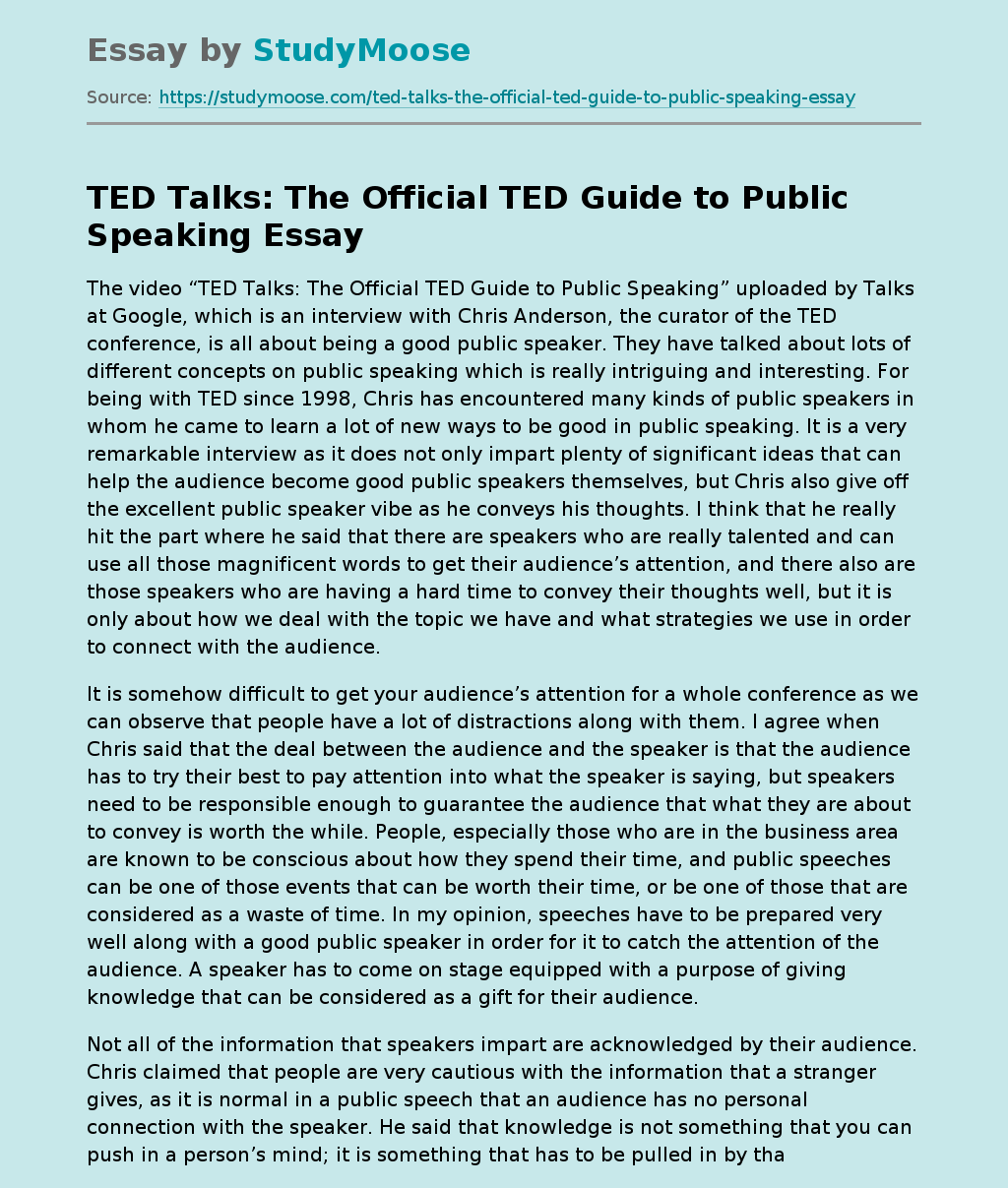