Composers deliberately manipulate conflicting perspectives in order to achieve their purpose. This may be a unanimous truth amongst composers whether it is to attract sympathy, inform the responder, or to make a comment on the functioning and morality of society. In order to achieve their purpose, composers deliberately manipulate responder’s conflicting perspectives so that they will have the same perspective as them. Ted Hughes utilises the subjective nature of the textual form of poetry so as to evoke a certain response to sympathise with him and relieve himself of any guilt in his collection of poetry, “Birthday Letters”.

“The Sea Inside”, a 2000 Spanish film based on a true story, directed by Alejandro Amenabar is an appropriate reflection of this.

The purpose in this film was to inform responders of the tragic reality that terminally ill and paraplegic patients have to live through every day and how they feel they deserve the right and freedom to die with dignity. Amenabar is manipulating the perspectives of the audience by evoking sympathy, similarly to Hughes, through the main character’s suffering so as to manipulate the responder into siding with his viewpoint.

“Birthday Letters” is used by Ted Hughes in an attempt to exonerate him from public perception that he was responsible for Sylvia Plath’s suicide. He continuously takes the stance of the surrogate victim to Plath’s mental instability and destructive nature in their relationship. This is evident in The Shot; a poem that draws on real life examples, ‘you hair done this way and done that way’, ‘sob-sodden Kleenex’, in order to emphasise her instability and destructiveness.

Hughes also use the extended metaphor of the bullet and its destructive connotations as well as using the title of the poem to place himself in the viewpoint that he was just the victim of Plath’s ‘trajectory perfect’ destruction – ‘Till your real target/Hid behind me. Your Daddy’. Hughes targets Plath’s father as the source of her mental instability as well as mentioning previous suicide attempts she had in order to persuade the responder into believing she was unstable before they met, ‘Even the cheek-scar… served as a rifling groove’. Continuing with the bullet metaphor he attempts to illuminate the responder of her destructive nature and the effect she had on him in the relationship as she unstoppably approached her ‘Alpha Career/With the fury/Of a high-velocity bullet’ utilising personification in order to convey the intense nature of her being to the responder.

Hughes deliberately identifies himself as an innocent, rational victim of circumstance who happened to be the one Plath chose to corrupt with her destructive personality, ‘In my position, the right witch doctor’. He repeatedly documents for the responder how he saw Plath’s decline in a mocking way in order to belittle Plath’s perspective – which she cannot offer – further indicating that he felt he was superior to her in order to give the responder his impression of the relationship. In the poem Sam he continuously mocks Plath in his description of her riding her horse, ‘An upside-down jockey with nothing between you but the cataract of macadam’ whilst in her poem Whiteness I Remember she describes it as an exhilarating experience, ‘Fear, wisdom, at one: all colours/Spinning to still in his one whiteness’.

Hughes evidently exaggerates the events of the horse-ride in order to further belittle Plath and convey to the responder his rational minded description of the relationship. We can see just how different each perspective of the same event was which indicates that he may not be describing the relationship accurately through extreme exaggerations causing the responder to question whether or not his depiction of events is legitimate. A tone of underlying resentment towards Plath is felt by the responder by this mocking description following her death which suggests that he may feel responsible and further attempts to manipulate the responder’s perspective in order to clear him of this guilt.

Alejandro Amenabar uses film techniques and characterisation in order to subtly manipulate the audience’s response which is one is one of sympathy. His purpose in making the film was more than to merely place his own perspectives to the audience but instead to inform the responder and lead them to make their own decisions based on the knowledge gained through the film. Based on a true story, the main character Ramon became a paraplegic during a diving accident and after twenty-five years of being bed-ridden, he wishes to end his life through euthanasia. This character attracts the most sympathy in the film as he is the main protagonist of the film, intentionally done so by Amenabar in order to persuade the responder to side with him.

Due to the very controversial nature of the issue, he attempts to maintain indifferent in his approach to informing the responder about the severity of euthanasia, reflecting society’s stance on the matter. His use of high panning angles to mimic flying during one of Ramon’s dream sequences shows vast landscapes expressing his innermost desires which cannot be fulfilled due to his condition, further emphasising his struggle. This struggle through everyday life convinces the responder to question how they live their own lives, regardless of whether or not they agree with the director’s viewpoint. Due to the fact that the film is based on a true story, a profound sympathy is felt by the responder as they are forced to watch Ramon struggle in intense scenes and through powerful visual imagery. Similarly to the poetry from Hughes, Ramon’s perspective being conveyed throughout the film is given the most sympathy, slightly belittling opposing perspectives and leaving the responder siding with his opinion.

Through the use of mise-en-scene and second person perspective the the closing scene, intense emotions and tension is conveyed to the responder in anticipation of him taking his own life. This viewpoint is from a single, static camera with the frame focusing on Ramon in a hospital bed on his own. The responder is forced to watch him take his own life right in front of them which is very confronting and further enhances mixed emotions and controversy in the responder’s mind. Since a variety of different perspectives are focused on in the film, Amenabar leaves the responder with the ability to construct their own opinions on the issue after an in-depth progression of events and characters. It is clearly evident that composers deliberately manipulate conflicting perspectives as it would be nearly impossible not to.

In making their art, a composer provides their own beliefs on morality and perspectives and they attempt to persuade the responder into thinking that way as well. Both Hughes and Amenabar use various techniques in order to evoke sympathy from the responder and attempt to persuade them into siding with them. The purpose of Hughes work was to exonerate him from public scrutiny following Plath’s suicide which is a very deliberate manipulation of responder’s perspectives in itself. Amenabar however attempts to make a social comment on the laws and regulations in society and remains somewhat indifferent in his approach to the issue, although there will always be an underlying intention to persuade the responder into believing his perspective. Although the intention of a composer is questionable, it is inevitable that they are going to manipulate an audience’s perspective. 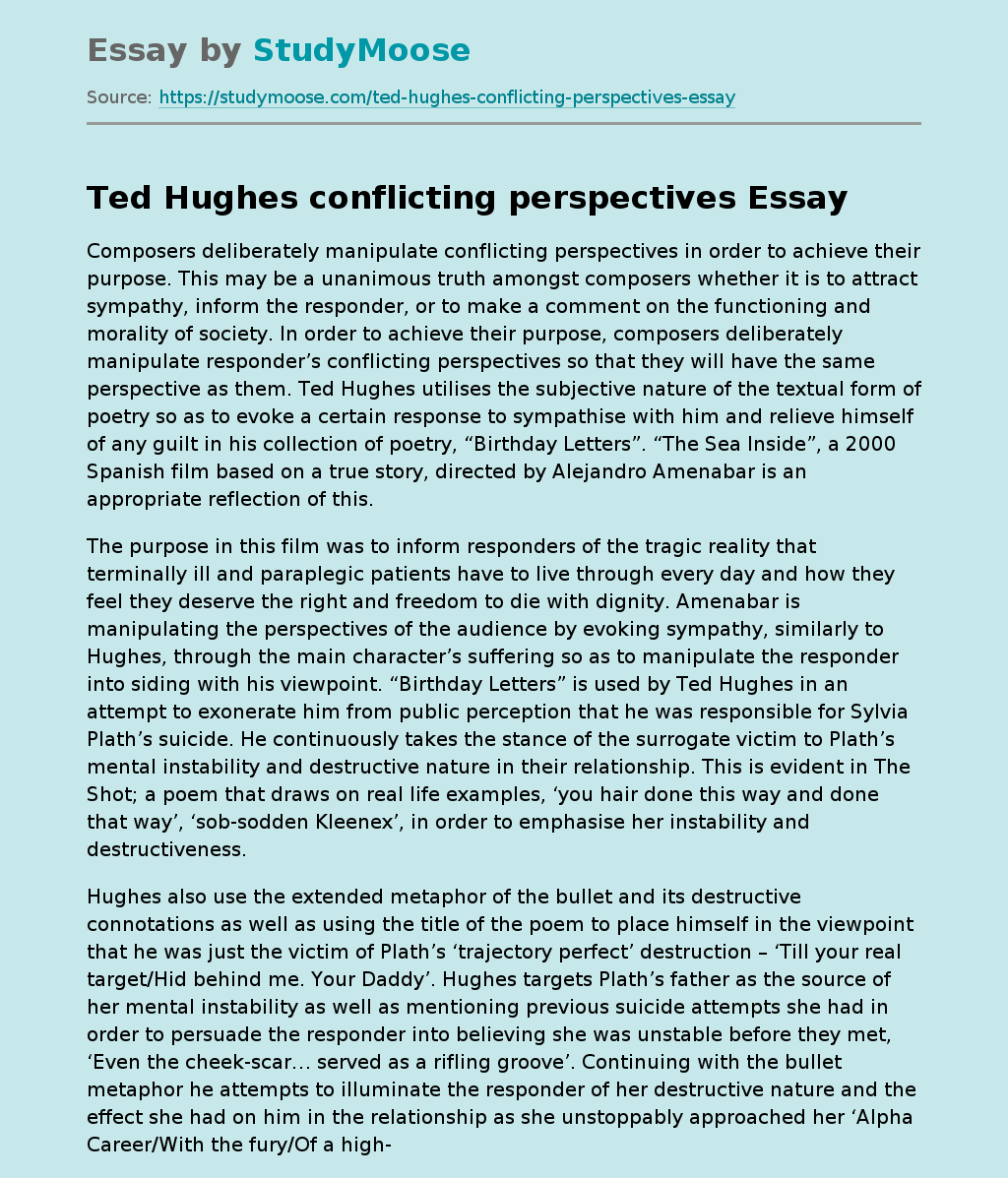