India is a big country comprising many racial groups with a great number of spoken languages and dialects. There are several religions and sects. These are reflected in their customs, rituals, dresses and festivals. Indian is the cradle of many cultures. In spite of the diversities, the people are united. Though several foreign invaders attacked India, none succeeded in destroying the basic Indian culture. One the contrary, it absorbed the good qualities of the new cultures and emerged as a richer culture after these Sikh religions.

Don't use plagiarized sources. Get your custom essay on
“ India: unity in diversity ”
Get custom paper
NEW! smart matching with writer

There are certain common links and bonds that unite people of different religions invasions. Indian is a composite cultural society where world religions like Christianity, Islam, Buddhism, Jainism, etc. have co-existed with Hindu and. Indian is a secular country and the Preamble to the Constitution of India justifies the fact. The Constitution guarantees each individual the freedom to profess, practice and propagate his religion. We believe in the theory of dharma and karma. The theory of rebirth and purification of soul, and the philosophy of hell and heaven holds good everywhere.

Our scriptures are the storehouses of spiritual wisdom. The Indians are rooted to spiritual values in spite of the material progress. The West is fast inclining towards our spiritual values which include meditation, charity, love, universal brotherhood, fear of God, control of passions, etc. During the British rule in India, the people from all sections and communities stood for a common cause which resulted in the revolt of 1857. It was the first time in Indian history that people from all walks of life, irrespective of their caste, religion and region stood together against a common enemy.

Though the revolt didn ‘t succeed, the British realized that unity in diversity was a threat to their empire. With the passage of time, the resentment against the British rule picked up momentum. Gandhiji worked to develop harmony between the Hindus and the Muslims. This was a grave threat to the British rule. They then followed the policy of divide and rule which led to the feeling of intolerance between the two communities. This in turn led to the partition of India, though India gained independence. At times, we have witnessed conflicts and disturbances. Certain anti-national and external forces try to disrupt the unity of the country by encouraging communal feelings and sentiments.

It leads to intolerance, disharmony and lawlessness among the masses. There has also been an increase in riots, violence and killings of innocent people. The demolition of Babri Masjid, Mumbai blasts, massacre of innocent Sikhs in the 1984 riots, Gujarat riots of 2002, blasts in the capital of the country, terror attack in Mumbai resulted in the loss of thousands of lives and massive internal migration. The militancy problem in Jammu and Kashmir and the Northeast have further weakened the secular fabric of India. Terrorism should not be allowed to raise in ugly head and destroy our basic unity. We can overcome this problem if we bury our feelings of differences for one another and work unitedly. The Indian culture has always been tolerant to different cultures. It is for this reason that it has remained alive though many ancient civilizations decayed. Influence of various cultures have made it rich and vibrant. Significant contribution have been made to it by the Aryans, Dravidians, Mongolians, Greeks , Persians, Arabs, Mughals and Europeans. The Persian and Western influence on our art, literature, painting and dress have now become an integral part of our own culture. If a person travels from one part of the country to another, he faces a totally different enviroement, where people talk, dress and worship differently. But he will not feel as a stranger. Every where he will recognize a common thread in some aspect of life which makes him feel at home. This is because the Indian culture has preserved its fundamental character through the ages. Indian has a rich cultural heritage. She is a treasure-house of music, fine arts, dance, drama, theatre, literature and sculpture. The temples of the south, the caves of the Khajuraho, Ajanta and Ellora are shining examples of Indian sculptures and architecture. The Taj Mahal, Red Fort, Jama Masjid, etc show a blend of Indian and Mughal architecture.

The variety, color and the emotional richness of dances is a feature of India ‘s culture unity. The country abounds in tribal dances, folk dances as well as classical dances of great skill. Indian festivals are held in various parts of the world. It projects the cultural unity of Indian in the eyes of the world. Our cultural heritage serves as a bond of unity between people of different faiths and creeds. In recent time, there has been a cultural awakening of the educated youth who have become aware of the beauty of our forms and crafts. They have started taking interest in educating themselves about their rich cultural traditions. The government has also started organizing big cultural events to promote national integration. It has set up four regional cultural centres in different parts of the country. It is the effort of the government to strengthen the common bond of unity that ties the people together in spite of the diversity in their religions and beliefs. The heart of Indian is one. We are all heirs to a common and rich culture. We should not be influenced by superficial prosperity or by Western ideologies. We should strive to maintain the relationship of common brotherhood. We should uphold the torch of unity irrespective of the different faiths and creeds.

India being the largest democracy in the world with a civilization more than five thousand years old boasts of multiple cultural origins. The cultural origins of the Indian subcontinent can be traced back to the Indus Valley Civilizations, the remains of which are cherished even today. Since the late 16th century India was under the influence of the British Empire until 15th August 1947 the day when India gained independence. India is a land of diverse cultures, religions and communities. There is great diversity in our traditions, manners, habits, tastes and customs. Each and every region of the country portrays different customs and traditions. But though we speak different languages yet we are all Indians. ‘Unity in Diversity ‘ has been the distinctive feature of our culture. To live peacefully has been our motto and this motto has helped us to achieve independence. As history tells us that there has been active participation from people of different caste and religion. In our struggle for freedom people from different communities participated keeping one thing in mind that they all are Indians first. But unfortunately this peace and understanding among different communities has been endangered lately. India at present is facing many problems. The biggest of these is the problem of communalism. In their personal fight they are destroying their life only. In fact, it is the biggest threat to humanity and to the unity and integrity of the country.

People from different background and culture participated in India ‘s struggle for freedom. The national leaders, particularly Mahatma Gandhi, Nehru, Azad and Bose had coined the slogan unity in diversity There are numerous others who were also involved. Be it Hindu, Muslim, Buddhist, Jain and Sikhs everybody had a single identity of being an Indian. It should be
understood that all of us have multiple identities religious, linguistic, cultural, regional and caste identities. No one can claim single identity. One who demands single identity i.e. national identity does not recognize the reality but during India ‘s struggle for freedom no one thought in that manner they just thought of India ‘s independence. Modern India presents a picture of unity in diversity where people of different faiths and beliefs live together in peace and harmony. Still today also India remains one of the most ethnically diverse countries in the world. 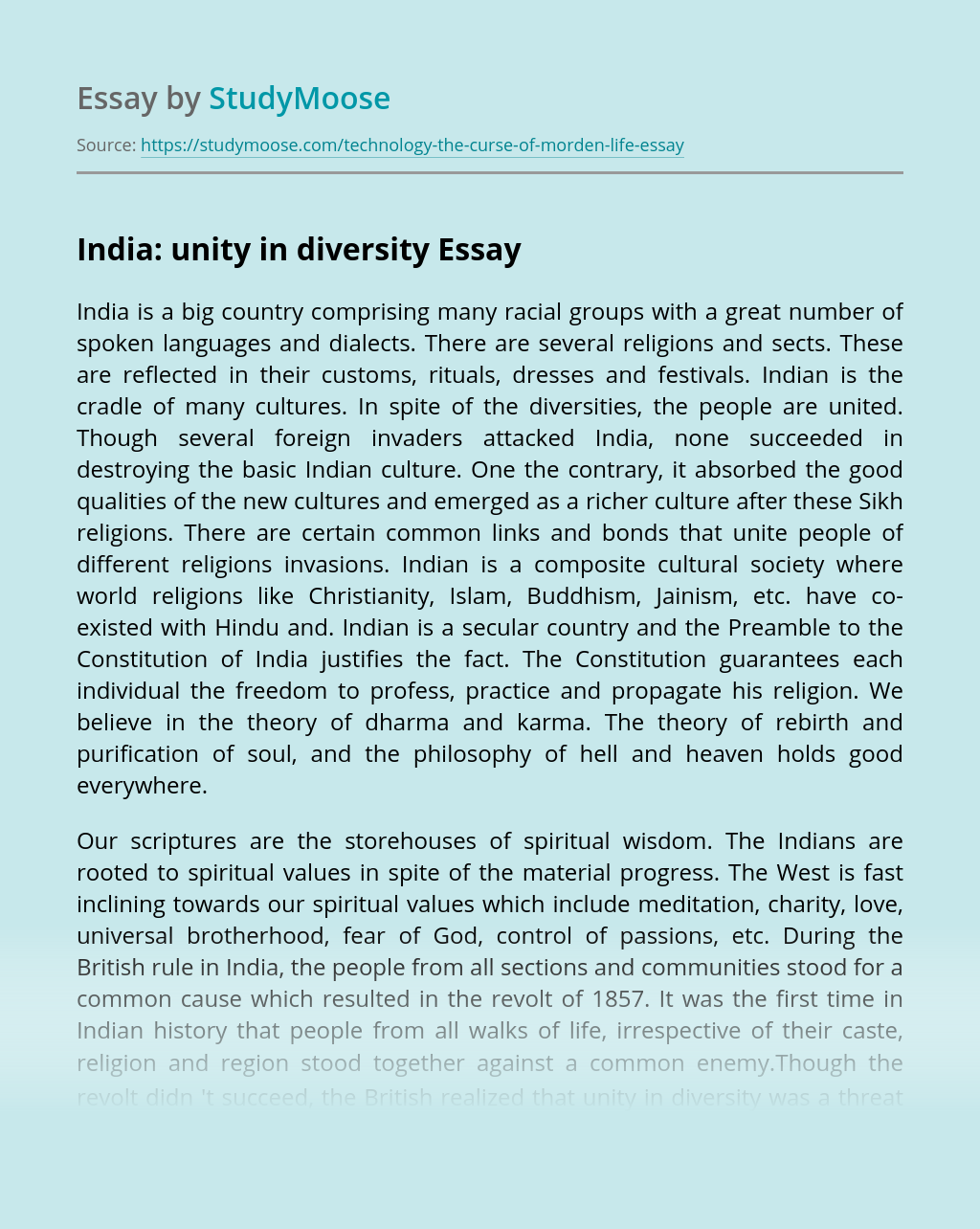