Technology and Mobile Services in Thailand

Don't use plagiarized sources. Get your custom essay on
“ Technology and Mobile Services in Thailand ”
Get custom paper
NEW! smart matching with writer

In 2019, Thailand’s business environment scores have improved, and the macro-economic would stabilise in the later part of the year (EIU Digital Solutions 2019).

In a study, the number of mobile phone internet users in Thailand is 26.5 Million people in 2017, and is expected to be 32.4 Million users by 2023 (Mobile Phone Internet Users In Thailand 2023 | Statista. 2020). As seen from figure x, the number has been increasing significantly without declining. OCK could use the opportunity of such improvement in technology to further propel its revenues by avenues such as mobile marketing or the use of mobile payment options, which could possibly be done through developing an application for smartphone users.

The opportunity brought about by mobile marketing can form or shift consumer attitudes through the use of value added content that can be personalised through context and location specificity (LeppГ¤niemi, Sinisalo and Karjaluoto 2006, 6).

Mobile payment or loyalty programs through purchases could also be implemented through the advances in technology, the use of mobile payments could facilitate faster transactions in a traditional setting of a retail environment.

The complex technology behind mobile services would also be perceived as easily adaptable through the increase in the number of consumers in this digital age and mobile services is more likely to be effective with a wide range of consumers, not just those who are confident with new technology (Mort and Drennan 2007). From the statista research, it is reported that in 2018, 73.9% of households in Thailand had access to 3G wireless mobile connection. However, 14.5 Million did not have internet access. This could be due to socio-economic factors, age, or geographical isolation factors.

The Speedtest Global Index compares the data of internet speed around the world daily. It is reported as of January 2020 that Thailand is ranked 65 out of 140 countries on mobile internet speed and ranked 9 out of 176 in fixed broadband internet. Thailand has three main carriers- AIS, DTAC and True Move. AIS scored the fastest internet speed for its peak and off-peak hours from the survey done in SpeedTest , winning the SPEEDTEST Award. According to the internet speed in different cities in Thailand, the three fastest speeds were in Mukdahan (32.19 mbps), Sattahip (31.3 mbps), and Hua Hin (25.4 mbps). Bangkok has an average of 18.1 mbps (Bangkok Post 2015).

Thailand has five major train lines, of which two train lines serve bangkok. The light green Sukhumvit line that runs from Kasetsart University to Kheha. the dark green Silom line that runs from Bang Wa to National Stadium. Most parts of the country could be accessible by its public transport through the existing rail service and buses (“Thailand Train Map — All 5 Major Train Lines | Thailand Trains” 2020).

Technology and Mobile Services in Thailand. (2020, May 10). Retrieved from https://studymoose.com/technology-and-mobile-services-in-thailand-essay 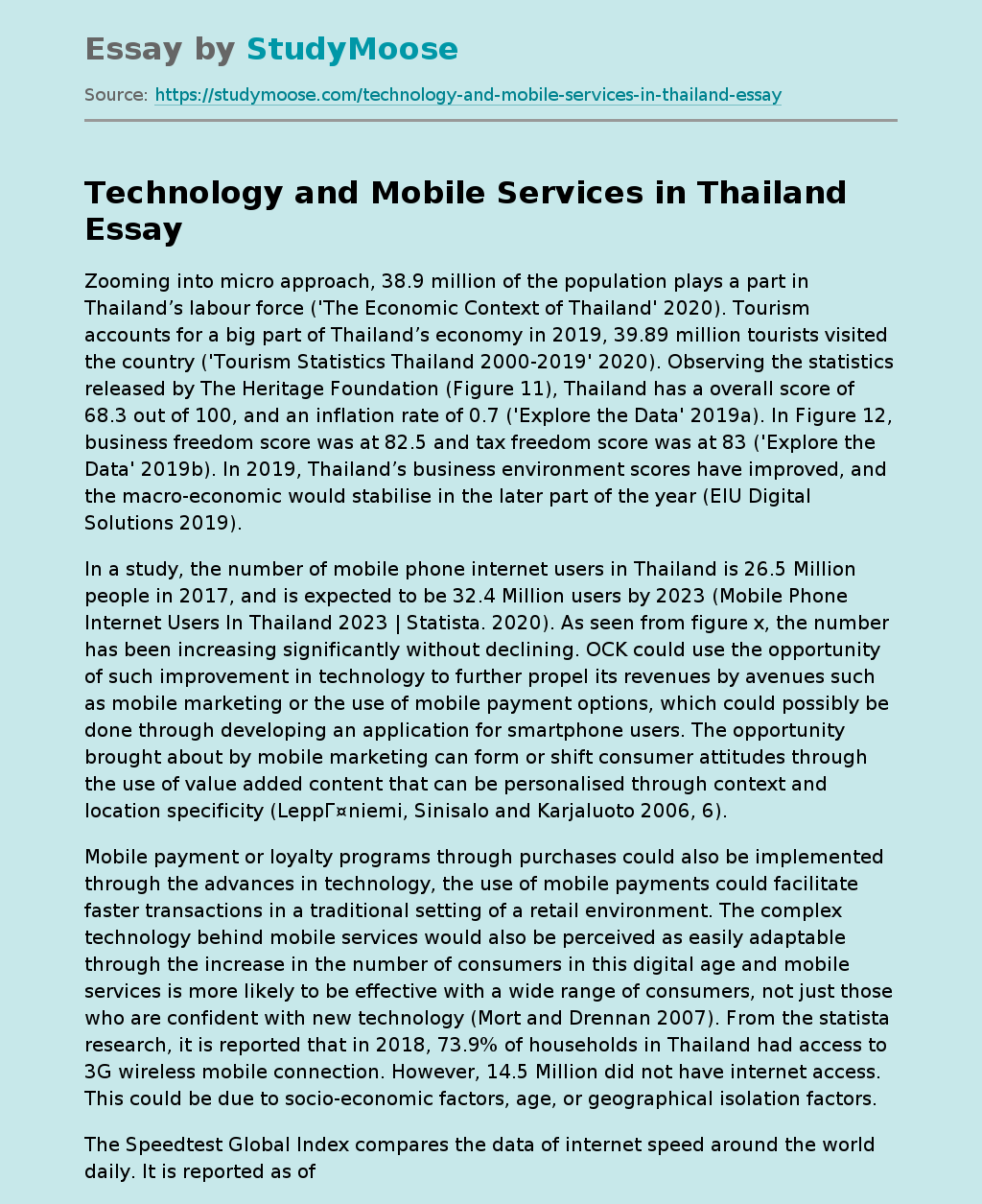