Technology is taking over all aspects of life. Education, work and leisure are all becoming increasingly dependent on being able to interact with technology. But what of the academic or career prospects of those who do not want to interact with this technology? Before taking this English 305 class, I tried to avoid computers as much as possible. I didnt have any interest in cyberspace such as chatting, email, and gender swapping. Through this class, I had a chance to contact others through cyberspace. However, I still have a fear of computers. I decided that I want to know more about computers and cyberspace. I will first discuss cyberspace, then I will discuss about technophobia. Its well known that people say and do things in cyberspace that they wouldnt ordinarily say or do in the face-to-face world. The virtual world is quite different from the real world. People cant see a person in cyberspace. People cant see a persons facial expressions and body language.

The sensory experience of encountering others in cyberspace-seeing, hearing, and combining seeing and hearing is limited. For the most part, people communicate through typed language. In cyberspace, people will probably never be able to physically interact with each other. There are no handshakes, pats on the back, hugs, or kisses. The limited sensory experiences of cyberspace have some significant disadvantages- as well as some unique advantages — as compared to in-person encounters. Since communicating only with typed text, people have the option of being themselves, expressing only parts of their identity, assuming imaginative identities, or remaining completely anonymous. Anonymity has a disinhibiting effect that cuts two ways. Sometimes people use it to act out some unpleasant need or emotion, often by abusing other people.

Everywhere I look outside my home I see people busy on their high tech devices, while driving, while walking, while shopping, while in groups of friends, while in restaurants, while waiting in doctor offices and hospitals, while sitting in toilets — everywhere. While connected electronically, they are inattentive to and disconnected from physical reality. People have been steadily manipulated to become technology addicted. Technology is the opiate of the masses. This results in technology servitude. I am referring to a loss of personal freedom and independence because of uncontrolled consumption of many kinds of devices that eat up time and money. Most people do not use independent, critical thinking to question whether their quality of life is actually improved by the incessant use of technology products that are marketed more aggressively than just about anything else. I for one have worked successfully to greatly limit my use of technological innovations, to keep myself as unconnected as possible and to maximize my privacy and independence.

I do not have a smart phone; I do not participate in social networking; I do not have any Apple product, nothing like an IPod, IPad and similar devices. I have never used Twitter or anything similar, or sent a text message. I do use the Internet judiciously on an old laptop. Email is good and more than enough for me. I very rarely use an old cell phone. So what have I gained? Time, privacy and no obsession to constantly be in touch, connected, available, informed about others. Call me old fashioned, but I feel a lot more in control of my life than most people that I see conspicuously using their many modern devices. They have lost freedom and do not seem to care about that. When I take my daily long walks I have no device turned on, no desire to communicate, nor to listen to music; I want to be in the moment, only sensing the world around me, unfiltered and uninterrupted by any technology. I am not hooked by advancing technology, not tethered to constantly improved devices, not curious about the next generation of highly priced but really unnecessary products, not logged on and online all the time.

I have no apps or games. Those who think interactions with people through technology devices are the real thing have lost their sanity. Technology limits and distorts human, social interactions. Worse yet, people have lost ability and talent for actually conversing to people face to face, responding to nonverbal nuances, or through intimate writing with more than just a few words. Consider these findings: “Researchers from the University of Glasgow found that half of the study participants reported checking their email once an hour, while some individuals check up to 30 to 40 times an hour. An AOL study revealed that 59 percent of PDA users check every single time an email arrives and 83 percent check email every day on vacation.” A 2010 survey found that 61 percent of Americans (even higher among young people) say they are addicted to the Internet. Another survey reported that “addicted” was the word most commonly used by people to describe their relationship to technology.

One study found that people had a harder time resisting the allure of social media than they did for sex, sleep, cigarettes, and alcohol. A recent study by the Pew Research Center ’s Internet and American Life Project found that 44 percent of cellphone owners had slept with their phone next to their bed. Worse, 67 percent had experienced “phantom rings,” checking their phone even when it was not ringing or vibrating. A little good news: the proportion of cellphone owners who said they “could live without it” increased to 37 percent from 29 percent in 2006. The main goal of technology companies is to get you to spend more money and time on their products, not to actually improve your quality of life. They have successfully created a cultural disease that has gone viral.

Consumers willingly surrender their freedom, money and time in pursuit of what exactly? To keep pace with their peers? To appear modern and sophisticated? To not miss out on the latest information? To stay plugged in? I do not get it. I see people as trapped in a pathological relationship with time-sucking technology, where they serve technology more than technology serves them. I call this technology servitude. Richard Fernandez, an executive coach at Google acknowledged that “we can be swept away by our technologies.” Welcome to virtual living. To break the grand digital delusion people must consider how lives long ago could be terrific without all the technology regalia pushed today. What is a healthy use of technology devices? That is the crucial question.

Who is really in charge of my life? That is what people need to ask themselves if they are to have any chance of breaking up delusions about their use of technology. When they can live happily without using so much technology for a day or a week, then they can regain control and personal freedom and become the master of technology. Discover what there is to enjoy in life that is free of technology. Mae West is famous for proclaiming the wisdom that “too much of a good thing is wonderful.” Time to discover that it does not work for technology. As to globalization of technology servitude: Is this worldwide progress what is best for humanity? Is downloaded global dehumanization being sucked up? Time for global digital dieting.

Technology has become a great benefit to us but many people have taken it too far. According to researcher and surveys taken all over the world shows that a large number of people may have become addicted to their technological devices and are not able to make it through a day without their cell phones or other technological devices. Many have concerns that people would rather use these devices than to have a face to face conversation. The addictions of technological devices are on the rise. Although these devices were meant to make our lives easier there have been many problems to arise ranging from health risk, relationship problems, classroom, church, and work interferences. Statistics show that cell phones and GPS systems related accidents are at an all-time high. In today’s society cell phones have made it dangerous to drive.

Nine times out of ten when someone drifting into another lane while driving they are either analyzing their GPS, texting or talking on their cell phone. The advancement and use of technological devices has become an addiction and brought forth unhealthy changes in health and interpersonal relationships. Is there such a thing as “Technology Addiction?” Some experts say that constant use of Technological Devices has not been diagnosed as an addiction yet.

Others however, aren’t convinced and researchers argue that Technology Addition does exist as an addiction or even detrimental to most people’s quality of life and continues to rise (Tanaka & Terry, 2008). In a few short years technology has changed the way we interact, especially young teenagers. Television watching and going to the movies are at an all time low. Teenagers would rather be playing video games, talking or texting on their cell phone, or on the computer social networking on my space or face book. According to a study, about three-fourth of American Teens have cell phone or computers

Excessive computer use may result in, or occur with:

Most Common Causes for Computer Addiction

The most Common Types of Computer Addiction 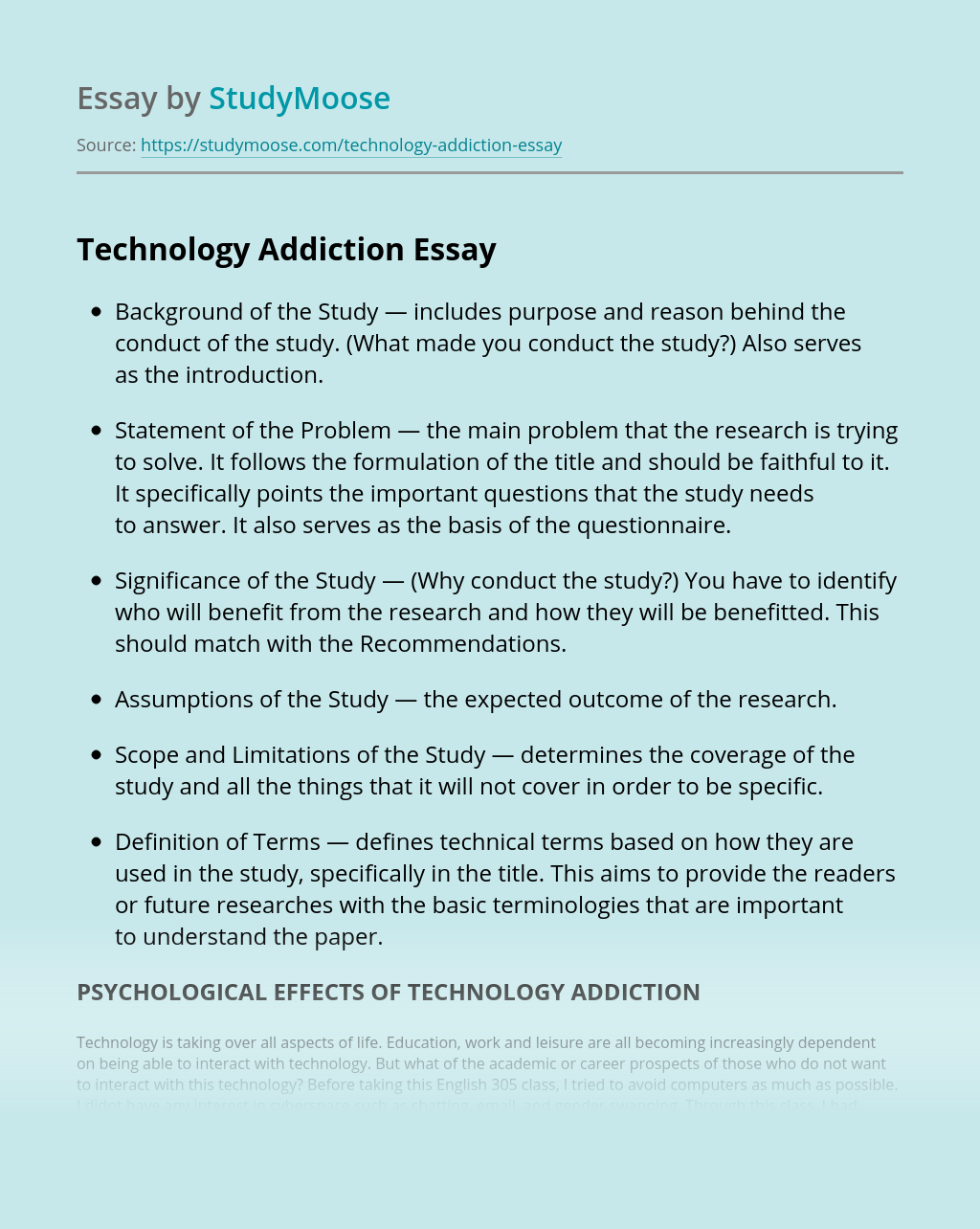 When most people admit that they are addicted to pornography, it would most probably be internet pornography, although all other types of pornography may be valid too. The progress of pornography addiction is extremely high with access to Internet. This is because Internet provides a huge amount of unlimited pornography, with varying levels of graphic...

When I heard that one of the quotes for today’s essay was “old habits die hard ” some of Mick Jagger’s lyrics came to mind “I’m not an addict ,it’s just a habit”. It takes a long time to develop a bad habit and as much or longer to stay away from it . We...

The Biopsychosocial Model of Addiction is easily the model that appeals to me most. This model states that addiction is the result of multiple, interacting variables, the strength of which vary between individuals. When I was observing each of the models, I found myself agreeing with two or three of the different standpoints from which...

Adolescence and Substance Abuse or Addiction

Adolescents, or teenagers, use drugs (prescription and illegal) and alcohol for many of the same reasons as adults. Most notably, the pleasure or euphoric feeling associated with use and as an escape from the stress and pressure of a situation or of life in general. Many students have even started using prescription drugs, such as...