Originally written in 1931, Brave New World is about technological advancement. Humans are made in assembly line under genetically modified condition. Considering the time when it was written, one would expect it to cover wide view on sexism. True to that, the entire book is riddled with cases of sexism towards women. In this work, I provide a Feminist Criticism of the novel.

To begin with, while it may appear in the surface that people in the society are equal, there is something on gender and orchestrated caste system.

However, there are many examples of sexism and oppression throughout the novel. Some examples of women oppression include forced sterilization in contraception, intrigues objects and patriarchal system since only men are in position of power (Wikler, 1985).Women are wanted only for their exception use in the creation of new humans in the assembly line. However in the world status not want women to be able to choose to have children on their own and so they decide to make 30 percent of the women able to reproduce and the other 30% sterile.

This is shown in the passage when the director of the great hatchery is explaining to people saying, “We allow as many as thirty percent of the female embryos to develop normally. The other get a dose of male sex hormones every twenty-four metres for the rest of the course. Result: they’re decanted as freemartins-structurally quite normal (except,’ he had to admit, ‘that they do have just the slightest tendency to grow beards), but sterile.

Women having the choice over the over their body to reproduce greatly threatens the society they live in. women who are not sterile are forced to sue contraception as depicted in the passage which says, “Lenina did not forget to take the contraceptive precautions prescribed by the regulations. Years of intensive hypnopaedia and , from twelve to seventeen, Melthusian drill three times a week had made the taking of the precautions almost automatic and inevitable as blinking”(Huxley, 2007). The women are forced by law to take contraceptives to ensure that they cannot get pregnant as well, children are not needed to always that it is as natural as any process they do. In society pregnancy determine and lean on women since it is never mention about men having to take any precaution to avoid pregnancy nor men being sterilized. The situation is so detrimental that even the words mother and father is little spoken of in this society. In our society the introduction of contraceptives through women, help progress human rights. In the future Brave New World society, the opposite happens. It is thought that if the society could synthesize the production of human eggs, then the hatchery will no longer produce women , only produce sterile women to provide sex to man.

Women are treated as objects especially sexually. Sex in the society of Brave New World is seen as something that is very normal and not sacred. Children are taught to have sex from a young age and promiscuity is encouraged. However, Women especially Lenina they are talking about objects under the roof. This is can be seen as henry orders Lanina on a date by saying, “ten to five on the roof this afternoon… usual at six thirty” (Huxley 2007). Henry is expecting her to be submissive to his demands, which Lenina complies. It is written so that it may appear as Lenina belongs to henry rather than making her own choices. Later when henry is talking to the assistant Pedestrianator he says, “Oh she’s a splendid girl. Wonderfully pneumatic. I’m surprised you haven’t had her yet” (Huxley, 2007), which the assistant Pedestrianator replies, “I can’t think how I haven’t… I certainly will at the first opportunity” (Huxley, 2007). To Henry and the assistant Pedestrianator Lenina is nothing more than an object to be traded. When talking about her being a splendid girl, only mattered. They are not referring to her in a way such as a personality of beauty but rather the sex they have had of her and all that she can offer to them. Sex tool seem to appear throughout the novel and only women are mentioned in such a way. Women never mentioned men in an objectified way.

Men are the only people seen in position of power. Mustafa Monds says, “And passion and neurasthenia mean instability and instability means the end of civilization. You can’t have lasting civilization without plenty of vices (Huxley 2007). Men in power are encouraged to indulge in pleasure as seen in the rest of the novel. This pleasure talked about are often sexual and perpetrated by men for their own enjoyment. Mustafa Mod encourages men to enjoy women for their body but nothing else about them as people. Just moving on to the next woman can revive the pleasure (Fraser, 2016). Henry foster has a career higher than a hatchery. He says, “We also predestine and condition. We decant out babies as socialized human beings, as Alpha or Epsilon, as future sewage workers or future…. Directors of Hatchery” (Huxley, 10). Henry is in large position of power as well with an extremely important job. He has the ability to make him decide how to alter conditioned humans to what caste they will have to live for the rest of their lives. The director of the hatchery is a man and no women is introduced in a position of power in the hatchery, or controllers or any other personal positions. The author may have done this influenced by the period in which this novel was written. Such is the case that in the 1930s, women were not often allowed to be in position of power or even just hold job positions. This is also true in today’s worlds where only a small percentage of women hold key management job positions (Brown, 1993).

Overall, it may appear that genders are equal in Braves New World, but looking a little deeper, that is not true. Women are only wanted for their eggs that only some have to offer. In addition, although they produce eggs they have no choice of their own on what to do with them and forced by law to stay sterile, carrying the responsibility of caring for men who are not considered liable for pregnancy or even sterilized. In addition, throughout the story, the only people introduced in the position of power, no women are not introduced in these positions. Considering the time when this work was written, this would have been depicted as a significant progress but not according to today’s standards. 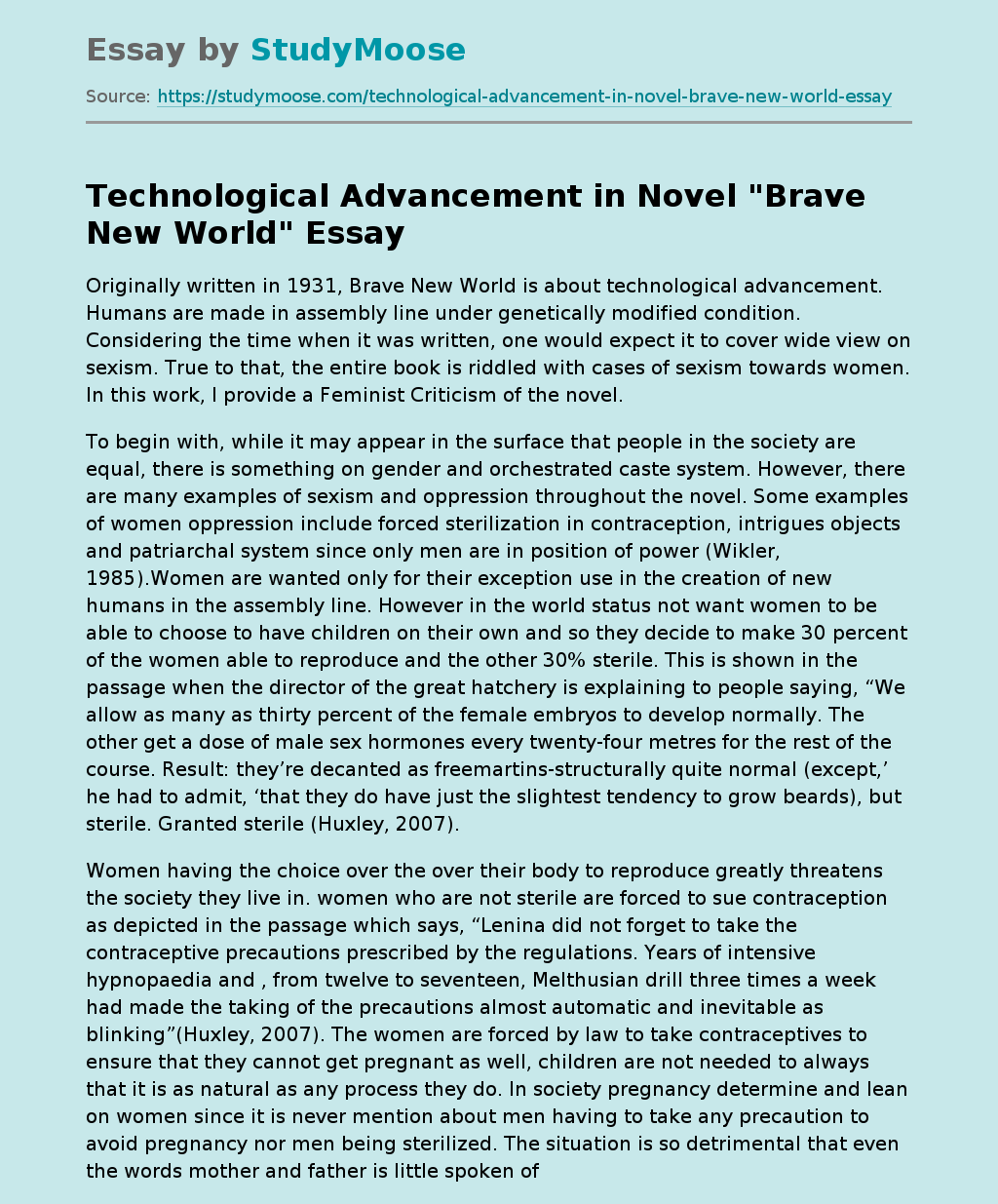