The poem ‘Tears’ by Edward Tomas was written in January 1915. This was a time when he had to make a serious decision about subscribing to the front line or not. This poem is typical of Thomas at this time and he tends to describe the beauty of the natural world, but there always a sense of darkness that shadows his words, such as with his other poem written around the same time, ‘But these things also. As this very deadly war raged on, there was a huge disruption in the natural order of things.

The effects of the war were deeply disconcerting for Thomas and this was evident in his writing during this time. By describing the beauty and richness of the natural world he creates an atmosphere where there is a grieving sense of utter doom and destruction.

‘Tears was written in January of 1915, only a few months before he enlisted (from Wikipedia). In this poem he talks about the effects of the war, and this has an air of patriotism about it, it is almost as if he has decided to go to war while writing the poem.

To me it seems that Thomas feels that enlisting means certain death, so it makes sense that he would agonize over that to the point of crying.

The hounds in line three are used here as a metaphor for English soldiers. The “twenty hounds” is most likely referencing a military division, such as a brigade or regiment. When he says that the hounds “streamed” by him, he means that the soldiers were marching past him in a tight formation. The hounds were “not yet combed out,” meaning that the soldiers were young and had not experienced the war first-hand yet. Lines four and five convey a sense of patriotism. It conveys a sense that the soldiers were hungry for action; they wanted to fight for their country. “Rage of gladness” is an oxymoron that Thomas uses to help convey to the reader that these inexperienced soldiers are blinded by the sense of naturalism that they contain. Lines four and five are an image of mythical huge dragon, depicting that it is stronger than reality and is on the side of the English when they step over the trenches and into the war.

Line six, in which Thomas refers to the soldiers ‘bend[ing] toward the sun’ paints a picture for the reader in which they are marching towards the Eastern powers, who are the enemy in the First World War. In addition Thomas mentions the ‘hops’, a type of flower used to bend toward the East though they have been silenced. This is the first time in the poem that Thomas uses his classic poetry form to describe past natural beauties. However, the ‘blooming meadow’ is still alive and representing a fertile, procreative land that features certain qualities of spring, which can be related to Thomas’s earlier poem, ‘March’.

‘Double-shadowed Tower’ in line eight has a many different meanings when you factor in that Thomas was most likely talking about a building in London. The surface meaning of these words seem to represent that it is a beautiful day out and two shadows are being cast as there are two suns on this magnificent day. Though, as with most of Thomas’s imagery, there is an underlying tone as well. The word, ‘shadowed’ seems to convey a dark image that is heavily burden with emotion. He is telling the reader that many soldiers will die, from both sides.

The sibilance in lines ten and eleven creates a calm atmosphere in which Thomas conveys the fact that soon everything will be gone. ‘Solitude’ suggests that he is almost lamenting and the word ‘silence’’ and the first use of full stop empathises his fear of the war. This also links into a image previously used by Thomas in ‘March’.

The poem has almost split here, and Thomas starts to, again describe his patriotism. The use of ‘mightily’ helps to convey a sense that the soldiers forming together are more important than the crown jewels. He is delighted by what he sees going on in the courtyard; he was watching the soldiers go about their daily tasks. “Fair-haired” means that they were most likely blonde. ‘Ruddy’ suggests that they have a fresh, healthy red complexion; young men are often described in this manner, which leads the reader to believe that these soldiers were not yet fully grown men. Although the relation to the colour red indicates that they might not be safe for long. Thomas uses colour again, with ‘White tunics’ to describe the military uniforms. This uses of the colour white conveys a sense of underlying purity and innocence that these young soldiers posses, they have never spilt a drop of blood.

‘Fifes’ are small, high-pitched flutes that are loud and shrill. “The British Grenadiers’ is a obviously a famous British marching song about the Brigade of Guards, which is an elite infantry unit. The song manages to break through Thomas’s ‘solitude’ and silence, and it touches him in a way he had not expected. This song is used to rally the troops; it is an example of the patriotism in this poem. The fact that music is ‘piercing that solitude’ suggests that it may carry a certain sense of violence and empathizes a point that even humans and the great Lord Jesus can be pierced by the evils of war.

Thomas uses anaphora in the final two lines to identify the togetherness of the soldiers. This conclusion to the poem captures the timeless, English essences that he is longing to keep. The vitality, power and sense of human gathering along with death leaves the reader struggling to understand what Thomas is feeling. I have managed to draw a conclusion by referring to a previous Thomas poem, ‘Adelstrop’ in which it represents itself as translating memory into epiphany. 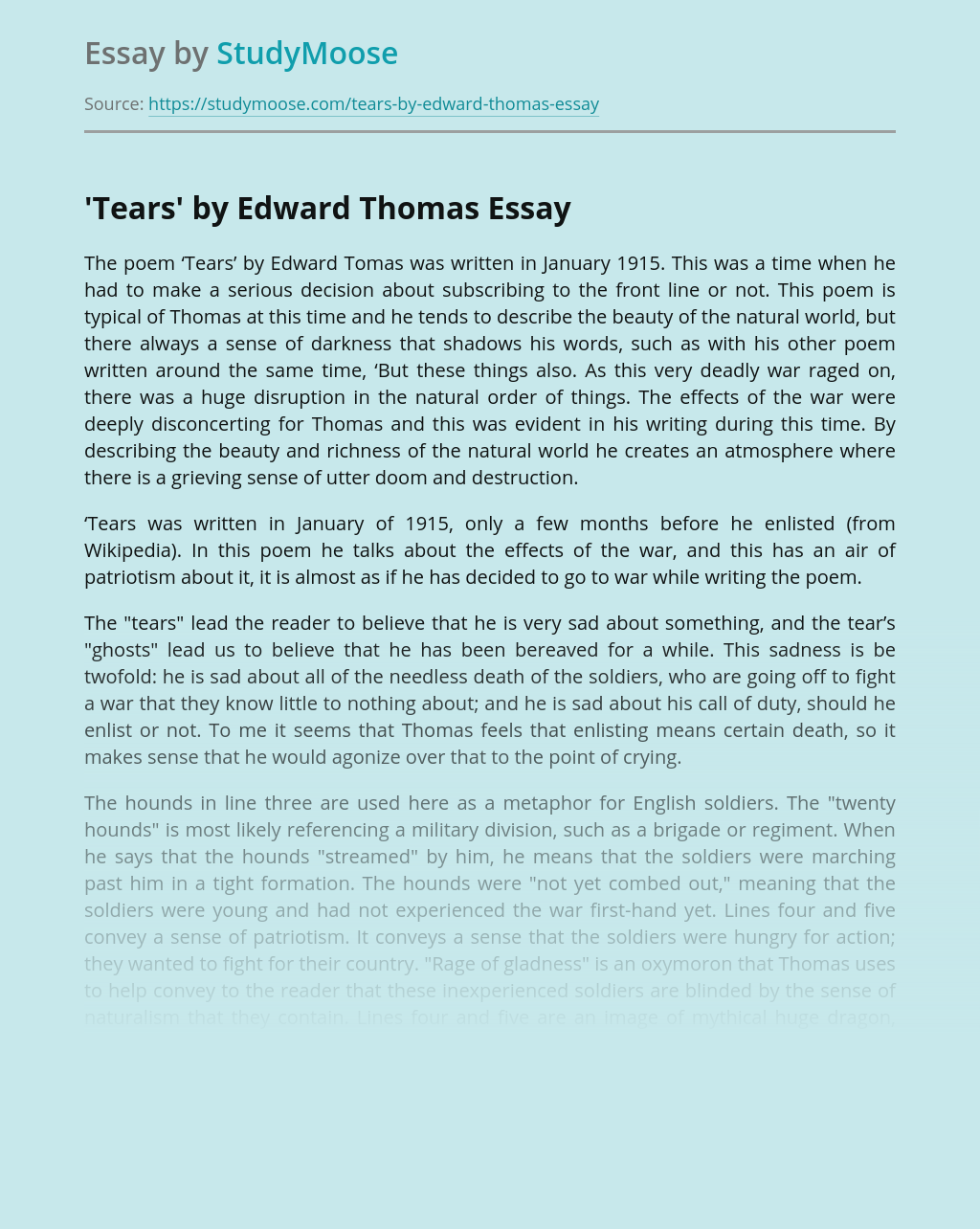 Don’t waste time
Get a verified writer to help you with ‘Tears’ by Edward Thomas
Hire verified writer
$35.80 for a 2-page paper
Stay Safe, Stay Original