The Teachings of St. Paul on the Gentiles

“We have peace with God, through Jesus whom has given us the Holy Spirit” – Letter to the Roman 3:1. Paul of Tarsus, otherwise known as Saul in Hebrew, is one of the most influential and earliest Christian missionaries. His writing of the New Testament provided the Christian society and gentiles ideally the way of salvation within Jesus Christ. “Salvation is based on faith not the works of the Law”*. Since the conversion at Damascus, St Paul has been a key figure within the Christian belief.

Don't use plagiarized sources. Get your custom essay on
“ The Teachings of St. Paul on the Gentiles ”
Get custom paper
NEW! smart matching with writer

Through his teachings of the life and works of Jesus, he was able to express the philosophy of the covenant, which we, as a Christian community, acknowledge significantly. The representation of this, is through Jesus’ death and resurrection. The several long journeys within the middle-east and south-west Asia St Paul had shared his teachings and knowledge, this was a key example of interests towards the gentiles. These teachings allowed, for men, to independently choose if they were to be circumcised or not.

This was a significant change for the Jewish Law, “All are saved through faith in Christ rather than observance of Jewish Law”* True circumcision is not outward, but rather inward circumcision of the heart in spirit and in the letters of praise is the heart not from humans but God”*. This emphasis’ that the male circumcision is a change of the Jewish law and it is one of St Paul’s earliest Christian teachings.

For by grace you have been saved through Faith, and that not of yourselves; it is the gift of God” – Ephesians 2:8. The relationship of this quote is that through the stories written by Paul and the letters, he acknowledges the salvation of faith through Jesus Christ. Through the Protestant and the catholic reformation, St Paul acknowledges the spiritual teachings about the belief of God. This has a significant ongoing impact within the life of the gentiles. Through St Paul’s scriptures and the set of guidelines he has created, he allows us to recognize the way of Jesus Christ.

St Paul’s key contribution within his writings and letters now form a fundamental belief and leading impact towards the council of Jerusalem. The integral writings of the Trinity today through the Nicene creed represents the significant of God today, proclaiming the word of Jesus Christ, “We belief in one god.. ”*. Saul played a crucial role in the development of Christianity and has been recognized and regarded as the second founder of the Christian movement.

Paul’s greatest impact on Christian history comes form his letters within the bible, as he has represented, “the people of Israel”, communities worldwide. St Paul also has developed powerful expressions of the human relationships towards the divine. The teachings of Paul, through the significant impact of his books have influenced the life and belief of Christianity, which has a significant impact on the gentiles. St Paul’s writings are considered foundational for Christian teachings and ethics and has impacted on the Western civilization significantly..

Paul’s letters are the earliest written sources of the Christian tradition. They predate the writing of the Gospels. He is connected to the apostolic period, to foundational period of the early Church Preached an all embracing message of good news which included the gentiles (the apostle to the gentiles). Instrumental in developing the early Church’s thinking on the Church; Jesus; Salvation; morality; pastoral directives for the early church. In terms of the impact of this theology, he is considered a vital figure in the development of Christianity and the early church.

The Teachings of St. Paul on the Gentiles. (2020, Jun 02). Retrieved from http://studymoose.com/teachings-st-paul-gentiles-new-essay 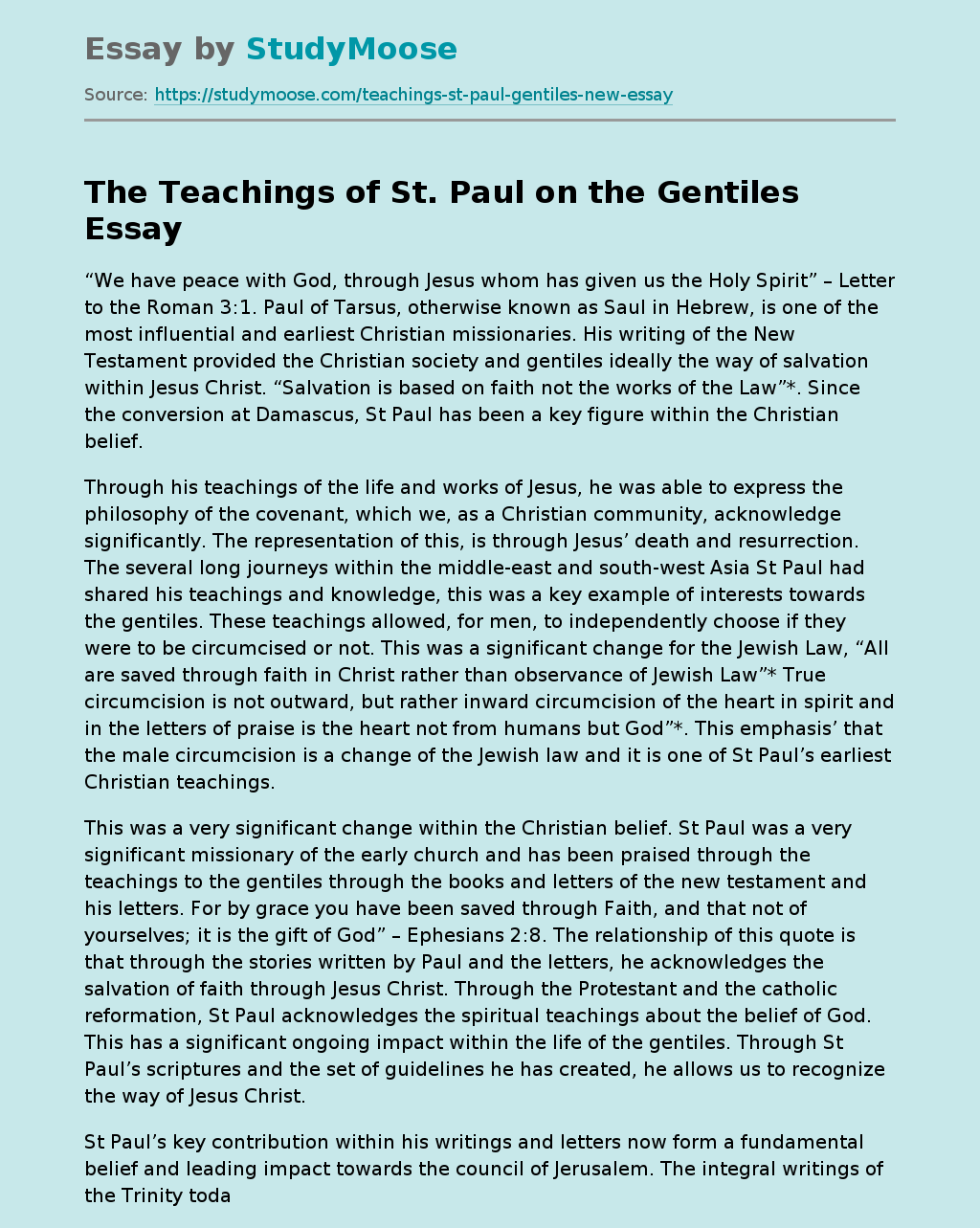