Q1) Given a collection of points P in the plane , a 1-set is a point in P that can be separated from the rest by a line, . i. e the point lies on one side of the line while the others lie on the other side. The number of 1-sets of P is denoted by n1(P). The minimum value of n1(P) over all configurations P of 5 points in the plane in general position (. i. e no three points in P lie on a line) is a) 3 b) 5 c) 2 Q2) Paul the octopus who has been forecasting the outcome of FIFA world cup matches with tremendous accuracy has now been invited to predict ICC world cup matches in 2011.

We will assume that the world cup contenders have been divided into 2 groups of 9 teams each. Each team in a group plays the other teams in the group. The top two teams from each group enter the semi finals ( after which the winner is decided by knockout).

However , the toy train is defective and it now produces only two different tunes at random. What are the odds that the toy train produces 4 consecutive music tunes of the same type? a) 1 in 16 b) 1 in 4 c) 1 in 8 Q4) A number when divided by D leaves a remainder of 8 and when divided by 3D leaves a remainder of 21 . What is the remainder left, when twice the number is divided by 3D? ) b) c) d) 13 cannot be determined 3 42 (solution:c) Q5) Six friends decide to share a big cake. Since all of them like the cake, they begin quarreling who gets to first cut and have a piece of the cake. One friend suggests that they have a blindfold friend choose from well shuffled set of cards numbered one to six. You check and find that this method works as it should simulating a fair throw of a die. You check by performing multiple simultaneous trials of picking the cards blindfold and throwing a die. You note that the number shown by the method of picking up a card and throwing a real world die, sums to a number between 2 and 12.

The problem posed at the end of the workshop is How many four digit numbers can be formed using the digits 1, 2,3,4 ,5 ( but with repetition) that are divisible by 4? Can you help Alok find the answer? a) 100 b) 125 c) 75 d) 85 Q9) Rearrange the following letters to make a word and choose the category in which it Ms RAPETEKA a) b) c) d) Bird Vegetable City Fruit Q10) On planet korba, a solar blast has melted the ice caps on its equator. 9 years after the ice melts, tiny planetoids called echina start growing on the rocks. Echina grows in the form of circle, and the relationship between he diameter of this circle and the age of echina is given by the formula d = 4*v (t-9) for t ? 9 where d represents the diameter in mm and t the number of years since the solar blast. Jagan recorded the radius of some echina at a particular spot as 7mm. How many years back did the solar blast occur? a) b) c) d) 17 21. 25 12. 25 12. 06 (solution:b) Q11) In the reading room of a library, there are23 reading spots. Each reading spot consists of a round table with 9 chairs placed around it. There are some readers such that in each occupied reading spot there are different numbers of readers.

If in all there are 36 readers, how many reading spots do not have even a single reader? a) b) c) d) 8 None 16 15 (solution:d) Q12) Ferrari S. P. A is an Italian sports car manufacturer based in Maranello, Italy. Founded by Enzo Ferrari in 1928 as Scuderia Ferrari , the company sponsored drivers and manufactured race cars before moving into production of street-legal vehicles in 1947 as Feraari S. P. A. Throughout its history, the company has been noted for its continued participation in racing, especially in Formula One where it has employed great success .

The matches are played in different rounds where in every round , half of the teams get eliminated from the tournament. If there are 8 rounds played in a knock-out tournol how many matches were played? a) b) c) d) 257 256 72 255 (solution:d) Q15) A research lab in Chennai requires 100 mice and 75 sterilized cages for a certain set of laboratory experiments . To identify the mice, the lab has prepared labels with numbers 1 to 100 , by combining tags numbered 0 to 9. The SPCA requires that the tags be made of toxin-free material and that the temperature of the cages be maintained at 27 degree Celsius.

Also , not more than 2 mice can be caged together and each cage must be at least 2 sq. ft in area. The 5 experiments to be conducted by lab are to be thoroughly documented and performed only after a round of approval by authorities. The approval procedure takes around 48 hours. How many times is the tag numbered ‘4’ used by the lab in numbering these mice? a) b) c) d) 9 19 20 21 (solution:b) Q16)There are two water tanks A and B, A is much smaller than B. While water fills at the rate of one litre every hour in A, it gets filled up like 10, 20, 40, 80, 160… n tank B. ( At the end of first hour, B has 10 litres , second hour it has 20, and so on). If tank B is 1/32 filled after 21 hours, what is the total duration required to fill it completely? a) b) c) d) 26 hrs 25 hrs 5 hrs 27 hrs (solution:a) Q17) Consider two tumblers, the first containing one litre of coffee. Suppose you take one spoon of water out of the first tumbler and pour it into the second tumbler. After moving you take one spoon of the mixture from the second tumbler and pour it back into the first tumbler . Which one of the following statement holds now? ) There is less coffee in the first tumbler than water in the second tumbler. b) There is more coffee in the firs tumbler than water in the second tumbler c) There is as much coffee in the first tumbler as there is water in the second tumbler d) None of the statements holds true. Q18) Francois Pachet , a researcher at Sony Computer Science laboratories is also a jazz musician. He decided to build a robot able to improvise like a pro. Named Continuator, the robot can duet with a live musician in real- time. It listens to a musical phrase and then computes a complementary phrase with the same playing style.

How many gloves must she take out to make sure she has a pair of each colour? a) b) c) d) 50 8 60 42 Q20) A man jogs at 6 mph over a certain journey and walks over the same route at 4 mph. What is his average speed for the journey? a) 2. 4 mph b) 4 mph c) 4. 8 mph d) 5 mph (solution:d) Q21) Spores of a fungus, called late blight, grow and spread infection rapidly. These pathogens were responsible for the Irish potato famine of the mid-19th century. These seem to have attacked the tomato crops in England this year. The tomato crops have reduced and the price of the crop has risen up .

The price has already gone up to $45 a box from $27 a box a month ago. How much more would a vegetable vendor need to pay to buy 27 boxes this month over what he would have paid last month? a) b) c) d) $27 $ 18 $45 $ 486 Q22) Given a collection of 36 points P in the plane and a point equidistant from all points in P, which of the following are necessarily true? A. The points in P lie on a circle. B. The distance between any pair of points in P is larger than the distance between X and a point in P a) b) c) d) A and B Neither A nor B B only A only Q23) In the year 2002, Britain was reported to have had 4. m closed – circuit television (CCTV) cameras – one for every 14 people in the country . This scrutiny is supposed to deter and detect crime. In one criminal case, the police interrogates two suspects . The ratio between the ages of the two suspects is 6:5 and the sum of their ages is 6:5 and the sum of their ages is 55 years. After how many years will the ratio be 8:7.? a) 11 b) 6 c) 10 d) 5 Q24) Susan made a block with small cubes of 8 cubic cm volume to make a block 3 small cubes long, 9 small cubes wide and 5 small cubes deep. She realizes that she has used more small cubes than she really needed.

She realized that she could have glued a fewer number of cubes together to lock like a block with same dimensions, if it were made hollow. What is the minimum number of cubes that she needs to make the block? a) 114 b) 135 c) 21 d) 71 Q25) Alok and Bhanu play the following coins in a circle game. 99 coins are arranged in a circle with each coin touching two other coin. Two of the coins are special and the rest are ordinary. Alok starts and the players take turns removing an ordinary coin of their choice from the circle and bringing the other coins closer until they again form a (smaller) circle. 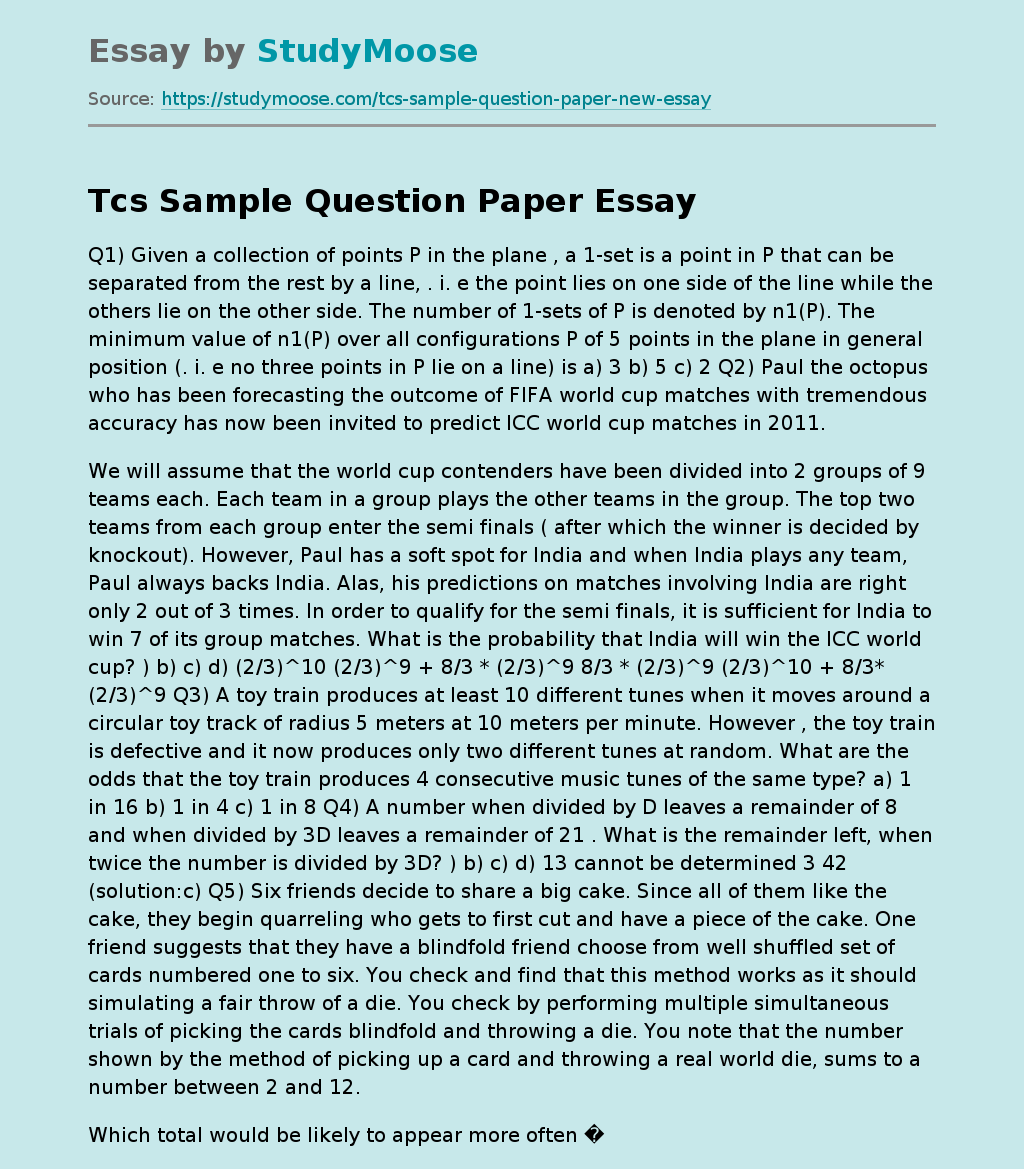