Tattooing as a trend in popular culture

Tattoos have been a part of people’s lives for many years now. To most people living in South Africa, tattoos are a normal thing, however there are many people with opposing opinions.

It’s impossible to walk through a mall for more than a couple of minutes without spotting people of all ages with tattoos.

Don't use plagiarized sources. Get your custom essay on
“ Tattooing as a trend in popular culture ”
Get custom paper
NEW! smart matching with writer

Tattoos come in all shapes and sizes, and they can appear almost anywhere on someone’s body. Permanent cosmetic studios also tattoo on eyebrows, eyeliner and lip liner for those who want their makeup to be permanent. In these cases, you may not even know that you are looking at a tattoo!

Tattoos have steadily gained popularity in the last decade, getting tattoos is now a trend that shows little sign of slowing down.

Tattoos can show that your in a group, whether it’s a tribal marking, gang signs or a family crest. But there are many other reasons why people get tattoos.

One of the main reasons tattoos have grown so rapidly in modern society, it the fact of how the are being advertised. People look up to the celebrities, rock stars, movie stars, sports stars and super models mentioned earlier. They see them with tattoos and think it would be “cool” if they too had tattoos, so the go out and get tattoos to try make themselves as “cool” as the celebrities.

The most popular tattooed female celebrity in the world today is Angelina Jolie. This actress, who has stunning good looks, has over a dozen tattoos, and still has plans for new ones. Her tattoos as she says, are “a reflection of her personality, exotic and with more than just a hint of dangerous sensuality”. Angelina Jolie has made the tribal dragon one of the most popular tattoos for women. Angelina Jolie has over sixty web sites dedicated to her, and her popularity shows no signs of Fading out, as she puts her own idea on the actions of female action-stars.

The case of getting a tattoo due to influence, happens mainly in the younger generation. Looking at an extreme case, youngsters being influenced by their “heros/idols” were in the eleven young boys, ages 9 to 11, who convinced a Thai monk to tattoo their shoulders, arms and legs in traditional Khmer fashion, because they believed it would give them superpowers, like the heroes in their favorite Thai movies who use the power of their tattoos to dodge bullets and other dangers.

So getting tattoos is mainly thought to be a social statement, trying to be either different, unique, or fit into the crowd.

To enter another aspect of tattooing would be to question the ethics or moral beliefs behind getting tattooed. In modern society there are certain beliefs, which frown upon tattoos, saying tattoos destroy the natural beauty of the body. But then there are some religions that believe in tattooing as a way of life.

But think of some tribe in a country you have never even heard of, a country isolated from the commercial world. This tribe will see the tattoo and not be able to understand how it appeared. What would they think of a tattoo? Maybe it could be a special marking from God, a birthmark that could make the bearer sacred. Or maybe they could see the tattoo as evil? The fact is, cultures have major effects on people’s viewpoints and the way we see life, discovering what is “socially acceptable” and what isn’t.

Tattoos could negatively effect the values, beliefs, and culture of the tribe. It could make each tribe member wonder why God has given this person or persons a special mark and not them. If God didn’t give the mark then how did it get there?

Some tribes are familiar with tattoos. They receive them for religious purposes, or with some special meaning behind them. The very fact that these tribes have tattoos, and are okay with them, makes me think that other tribes, such as the one isolated from the commercial world, could eventually see the tattoos as acceptable. On the other hand, some cultures will never see the making permanent marks on their body acceptable, as the body is considered a sacred temple.

In the United States of America and other similar countries, tattoos are much more common. People tend look at tattoos as a way to express their own personal character. Some people have their whole body covered with tattoos from head to toe with no skin showing at all. The most tattooed man in the world today, according to the Guinness world records, in a man called Tom Leppard. Tom has over 99.9% of his body covered in ink, the only parts remaining natural are the insides of his ears and the skin between his toes. I personally think that receiving that many tattoos is disgusting and in humane. Other people choose to just have one tattoo here or there, based on personal interests.

Our culture in South Africa, depending on how we were raised, helps us to believe that tattoos are okay as long as we can handle something that will never go away – which is how my parents raised me.

The tattooing process became popular very quickly in South Africa, due to it being an International Trend, and global out break in body Modification. I personally would not get a tattoo, as they are permanent. Once it’s placed on the skin it never goes away, and if I had to get bored with the design, I would regret it. Lucky for us tattoos are now removable, if you pay an arm and a leg.

In recent times, many physicians consider laser surgery one of the best methods of tattoo removal. Alexandrite and the Ruby are among the most frequently used lasers today for the removal of unwanted tattoos. They are all used in a similar way. If necessary, a cream to numb the skin can be used before to numb the skin and help avoid pain. Pulses of light from the laser are directed onto the tattoo breaking up the tattoo pigment. Over the next several weeks the body’s scavenger cells remove the treated pigmented areas. More then one treatment is usually necessary to remove the entire tattoo.

If you think about it, tattoos are one of the most common things to get among people of all ages. Some tattoos are small and cute, which are preferred by someone who doesn’t want to be covered with ink head to toe.

I think that all cultures are different when it comes to making decisions about their body. The culture that we live in has a huge effect on what seems to be Socially acceptable, or what is Socially unacceptable. If tattoos were not seen as “cool” there wouldn’t be such a huge “craze” and nobody would want to have one. Everything in our environment, especially the changing trends, determines the type of person we are. This can be bad to an extent, as some people all dress the same, act the same and do the same things, because they want to be Socially acceptable, however tattoos may be and international trend in the Popular culture, but each and every person has the right to choose a unique tattoo. By saying this I believe tattoos allow people to become individuals in this world of changing trends. My respect and admiration stands behind the person that can stand by their opinion firmly without regrets.

Tattooing as a trend in popular culture. (2016, Jun 24). Retrieved from http://studymoose.com/tattooing-as-a-trend-in-popular-culture-essay 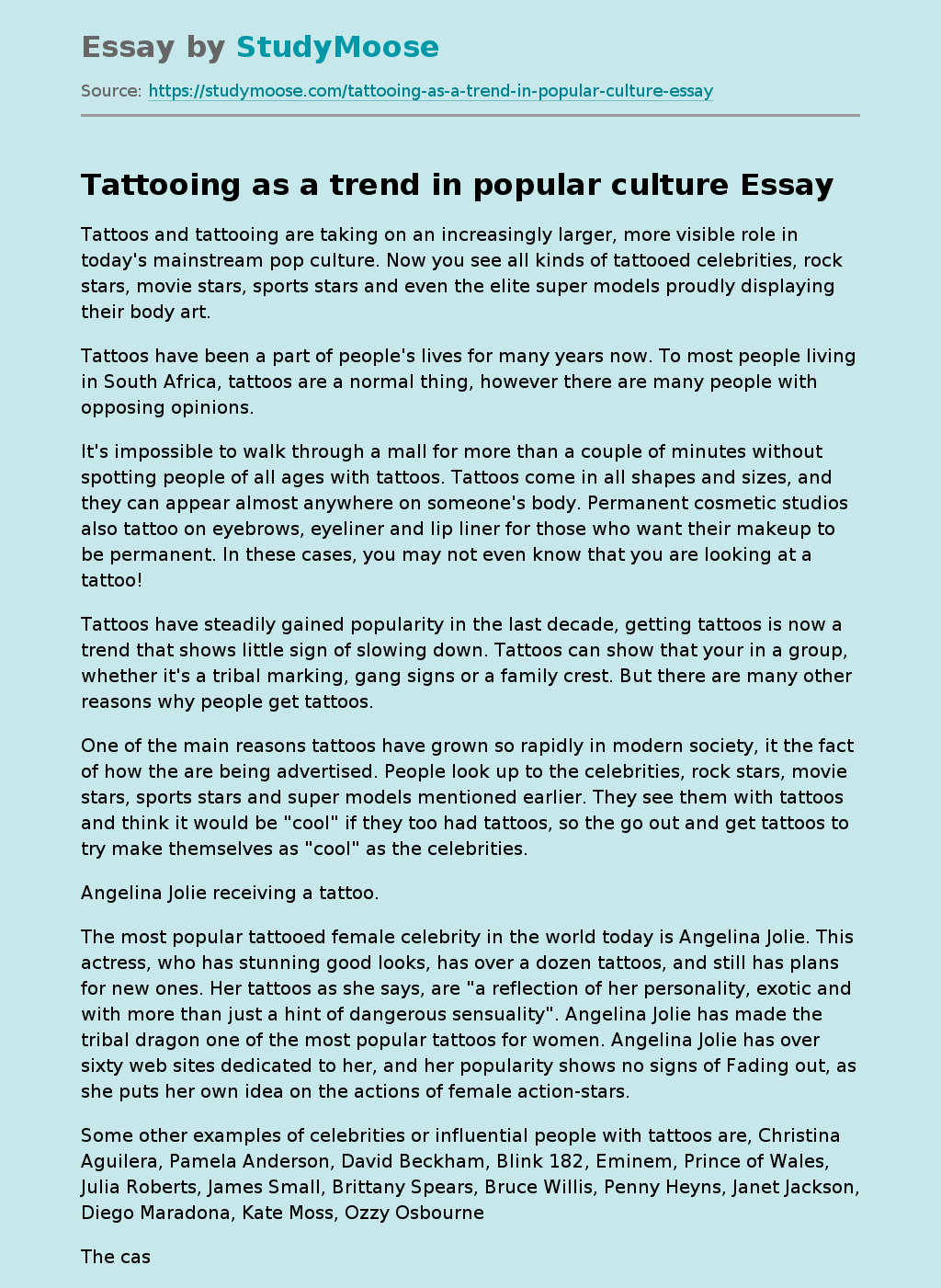