Target Corporation, originally Dayton Dry Goods Company, was founded in 1902 and headquartered in Minnesota. The first Target store was opened in 1962 with the purpose of providing customers with discounted values. Currently there are 1888 stores in the US and Canada and in 2004 Target Corporation sold all of their subsidiaries in order to focus on the Target stores. Today they are the second largest discount retailer in the world but are in continuous competition with stores like Wal-Mart and Costco. While Target needs to adjust its capital budgeting process, Doug Scovanner should accept all stores except Goldie’s Square.

Don't use plagiarized sources.
Get Your Custom Essay on Target Case Analysis Just from $13,9/Page

Furthermore, if Target were to limit its capital budget for store expansion to $120 million, Gopher Place, The Barn, and the Stadium Remodel should be accepted.

This executive memorandum compares Target’s business model to Wal-Mart’s and Costco’s, and analyzes Target’s capital budgeting process. Additionally, this memorandum analyzes which of the 4 CPR’s Doug Scovanner should accept using various financial calculations, as well as customer demographics and brand-awareness.

Lastly, this memorandum covers the decision and analysis for what Target should do regarding its CPR’s if it’s capital budgeting was limited to $120 million.

There are many similarities and differences between the business models of Target, Wal-Mart, and Costco. Target and Wal-Mart’s business strategies are more similar in that they offer a lot of the same products. The main difference is that Target aims to provide a better shopping experience while Wal-Mart aims to provide the lowest possible prices. Target wants to be held at a higher standard; their ideal customer is a college-educated woman looking for a quality shopping experience. Costco targets the same type of customer but their business model is different than that of Target. Costco is membership based, which accounts for a majority of their total revenue, offering their customers value in buying discounted products in bulk.

Target’s capital budgeting process begins with the real estate managers. They do the research on the area in which they are thinking about opening a store. They give the capital expenditure committee data about the prospective store location including tax considerations and real estate incentives. The executives that make up the CEC then meet to discuss the capital expenditure requests, taking into account the real estate research as well as an investment analysis including the NPV and IRR of the project. They will weigh the benefits of the project and make a decision whether to accept or reject. These aren’t the only factors considered; for example, a positive NPV does not automatically mean they accept the project. Other factors considered include a more detailed analysis of the area with projected sales, economic trends in the area, and demographics. After all the factors are considered, a decision is made whether to go ahead with the investment project.

One way Target’s CEC differs from Wal-Mart is that Target has a better debt-equity ratio. That shows that they use their debt well, doing a good job managing their assets and having a potential for larger borrowing capacity. Wal-Mart uses much more debt to finance their investment projects, which is riskier for them if the project does not translate into profits. Costco, on the other hand, uses less debt than Target to finance their project. Costco is much more risk adverse that both Target and Wal-Mart, which could cause them to overlook potentially lucrative projects.

After considering each potential investment opportunity using the investment criteria, Target should accept all except Goldie’s Square. Table 1 shows each investment criteria as well as an analysis of the demographics of each area. If you simply look at the NPV and IRR of each project, each would be accepted because they all have positive NPVs and higher IRRs. The reason to reject Goldie’s Square would be the fact that it has the lowest NPV and IRR of the five projects. Gopher’s Place would be accepted because of the high NPV and the fact that it is a high growth area with a high median income. Because Target aims at more affluent customers, their median income of $56,400 makes it a good area to put a store. Whalen Court would be accepted because of a high NPV and high IRR. Also they would be able to reach their affluent customer base due to the fact that 45% of the population is college educated. The Barn would be the safest project given the low initial investment and high IRR and positive NPV. It is also entering into a new market that could result in a high ROI regardless of sales growth. Finally, we would also accept the Stadium Remodel because of a positive NPV, high IRR, and above average forecasts. Although there were failed attempts at remodeling, the area has shown brand loyalty and could give a boost to the declining sales.

The main reason that the hurdle rate for credit cards is 4% while the rate for store improvements is 9% is the different costs of capital for funding each. It is more expensive to fund store operations that can account for some of the difference in hurdle rates. Also, Target is a leader in the industry with store-based credit cards, meaning they can take more risk regarding these investments.

Ultimately, Target should accept all CPR’s except for Goldie’s Square because this decision is most beneficial to Target: Goldie’s Square has the lowest NPV and IRR and does not have a high percentage of adults with at least four years of college like Whalen Court and Stadium Remodel do. 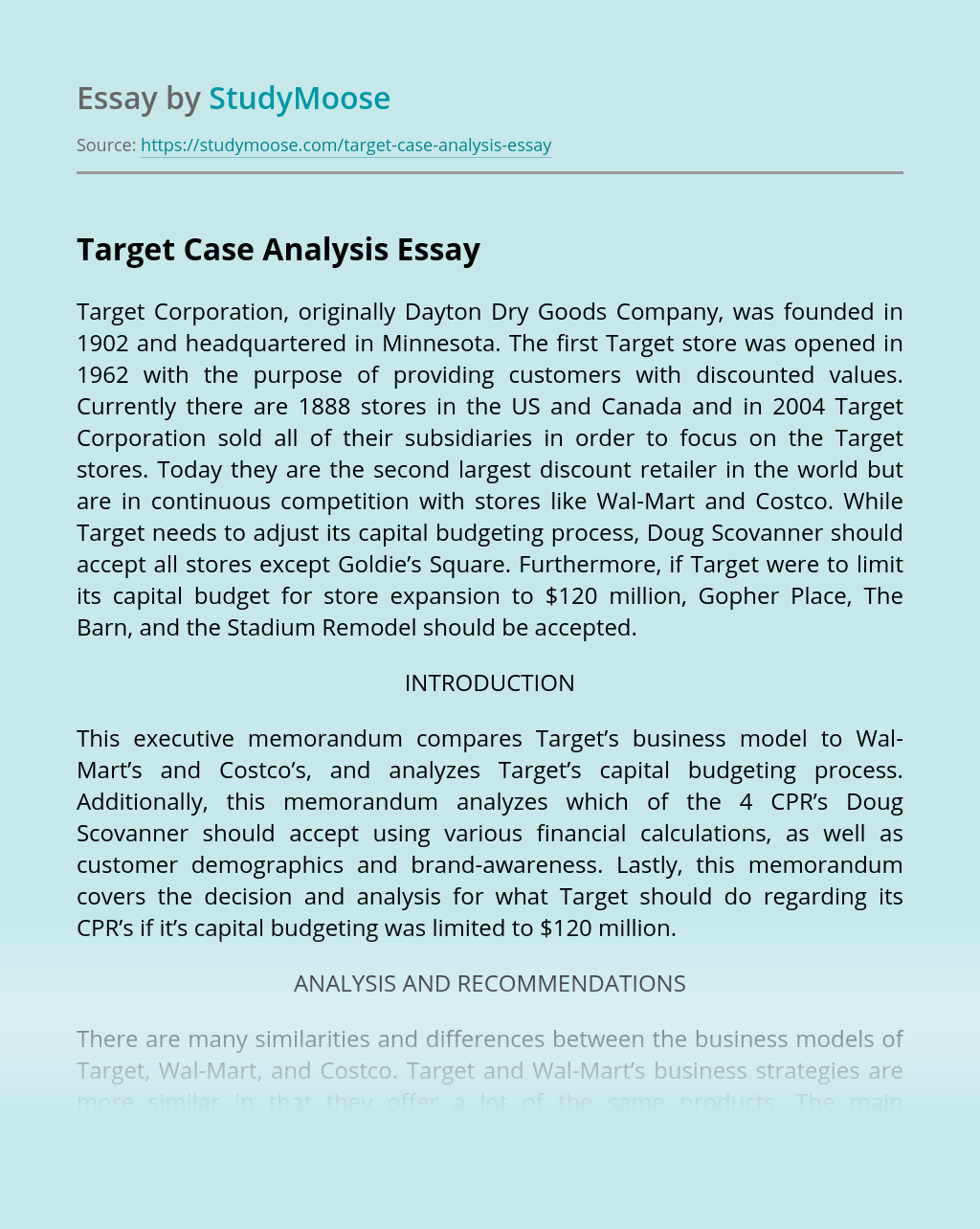 INTRODUCTION Mission of the organisation We will be creating a mobile game called Bang Wagon. The goal of the game would be to shoot as much targets as possible on a moving wagon. Our game’s target market would be people of all ages, as it does not have a s steep learning curve. The reason... VIEW ESSAY

Though I am from Francisco, my home country is Philippines, which I decided to visit on Oct, 2007 since I had not been there for fifteen years. On my way to my home from the airport, I took notice of a big mall which had been constructed in my absence and this prompted me to... VIEW ESSAY

Abstract: Despite the widespread agreement on the importance of dynamic capabilities (DCs) to the success of merger and acquisition, little is known about how a configuration of these capabilities may contribute to the business models’ innovation (BMI) of an acquirer. The goal of this article is to understand what some role dynamic capabilities play for... VIEW ESSAY

Improved self-esteem is another benefit of competitive youth sports. When a child wins a game with his team, he feels accomplished and recognized. However, though someone may argue that if he lost the game, it will reversely lower his self-esteem. But that may perhaps not the real case, even when he doesn’t win, he can... VIEW ESSAY

When the leaves start to change colors in autumn, they signal to fashion-minded shoppers to begin their search for the perfect new fall coat. But for some buyers, price trumps being the first to wear this year’s trends; and it is these consumers who ultimately wait, before parting with their cash, for retailers to slash... VIEW ESSAY