Categories: 10 Things I Hate About You The Taming of The Shrew
Download paper
Download
Essay, Pages 2 (348 words)
Views
232

William Shakespeare, a literary genius, compsed a famous piece of literature in the late 16th Century that has defied time and became a universal text, valued for more than four hundred years. The Taming of the Shrew by William Shakespeare is a grand narrative – its themes transcend time, place, culture and context. Owing to the plays universal themes and timeless elements, the test has been skillfully and cleverly appropriated to be valued in various periods of time.

The film 10 things I hate about youm composed in 1999 by writers Karen McCullah Lutz and Kirsten Smith, Kiss Me Kate directed by Georfe Sydney and Shakespeare Retold – The taming of the Shrew directed by Davud Richard are just some examples of texts that were skillfully appropriated.

Don't use plagiarized sources. Get your custom essay on
“ Taming of the Shrew and 10 things I hate about you Comparison ”
Get custom paper
NEW! smart matching with writer

In the movie, many actors paly roles based ypon characters in the play by Shakespeare. Some examples of this are: Patrick (or ‘Pate;) playing the role of Petruchio. Walter (Kat and Bianca’s father) plays the role of Baptista, Cameron plays the role of Lucentio, and Joey plays the combined role of Hortensio and Gremio.

The plot is essentially the same thing. In both of them the “Shrew” that gets tamed by a guy that is brought in so that someone else can have the “Shrew’s” Sister. Both 10 things I hate about you and the play Taming of the Shrew have a lot in common. One those things is the shared premise.

The settings, however are very different. The play takes place in Italy back in Shakespeare’s times, but the movie takes place in the 1990s at a high school in Seattle, Washington. Though they may be set in different time periods, the way the story is potrayed is very similar.

Taming of the Shrew and 10 things I hate about you Comparison. (2016, Apr 13). Retrieved from https://studymoose.com/taming-of-the-shrew-and-10-things-i-hate-about-you-comparison-essay 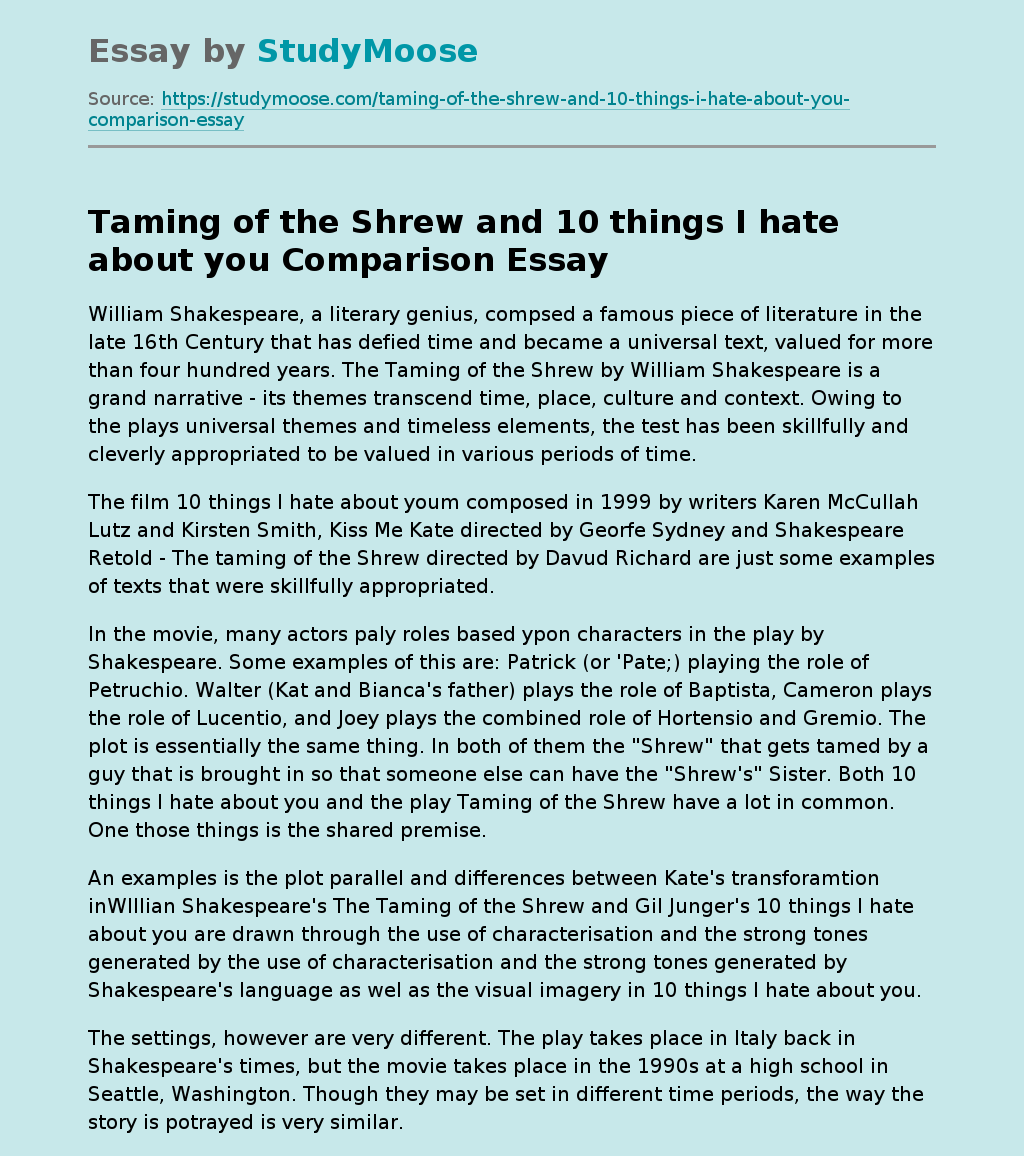