Taking a Knee in NFL: Respect towards the National Anthem?

The NFL and Taking a knee: Division or Unity

Further than history records, mas has existed as a social being. All cultures around the globe believe so much in in unity for strength that excommunication is perceived as one of the most punitive decisions. Nevertheless, missed targets are common where a predominantly unifying factor leads to division. Similarly, a seemingly divisive issue may end up unifying the group. In such instances, the society is set into unending debates in an aspiration to uphold, nullify or at least redefine the factor at hand.

Don't use plagiarized sources. Get your custom essay on
“ Taking a Knee in NFL: Respect towards the National Anthem? ”
Get custom paper
NEW! smart matching with writer

The recent protest characterized by players taking a knee during the national anthem is an example of debatable subjects as far as unity or division in the society is concerned. This paper critically examines the controversy around the National Footbaly League (NFL) with regard to kneeling (and sitting among some players) during the national anthem to unmask the associated unity or division in the society.

Kneeling during the national anthem was pioneered by Colin Kaepernick, who is a former San Francisco’s 49ers quarterback, in protest for purported police brutality against the black men.

[1] Terming the brutality as racial discrimination, Kaepernick objected standing for the flag, an act that the president Donald Trump did not take lying down. Consequently, Trump instructed team managers to sack players who failed to stand during the national anthem[2], which offered the protest more traction. As more players “take a kneel,” a recurrent controversy is evident. The most involved parties include NFL and its sponsors, football players, the administration and society at large.

Realizing that individuals are at times motivated to perform some acts when in a group than when alone, creating a thin line to brand the act as an entirely unifying or dividing factor is impossible. A critical eye on both sides, however, would offer significant insight.

To a large extent, kneeling during the national anthem has escalated division in the society. Although Kaepernick’s can be justified as an avenue to air his grievances, the impact of the protest is beyond the personal realm now that a larger group is involved. Various sources report that the controversy is has led to heightened polarization[3]. In the simplest form, the society will have divergent views regarding the legality of the act. For instance, the failure to stand during the national anthem can be perceived as disrespect to the nation[4]. This view would be strongly held by disciplined officers and many other individual with a mind that standing during an anthem shows reverence the state. Such individuals would support any action to defend the land from such disrespect. On the other hand, others would perceive it right, either because kneeling is also an expression of reverence or because they feel that Kaepernick and any other individual has a right to choose what to do or not do to safeguard their dignity. Left unchecked, such a division would disrupt social order and significantly affect national unity.

Team managers are also torn in a role conflict undecided whether to yield allegiance to the state by following the directive of the president, or to retain their esteemed players. Notwithstanding the decision they make, division are sure within the teams, xplaining why not a single player has been laid off[5]. It would be easier to tame one player who disobeys, but when multiple players unite in support of their peer, sending them all away threatens the operations of the team and places vast resources at stake. If one team for instance dares to dump a player, the civil society would be on their neck. Within the players, some will choose to follow Kaepernick’s actions while other’s adhere to Trump’s advice. This leads to contempt, when a teammate, held dear by a player taking a kneel decides to stand during the anthem. This slowly exacerbates hut feelings and significantly threatens unity in the team.

Division among NFL sponsors is also manifest. Some feel that kneeling has negatively affected their sales while other’s feel that NFL and kneeling are not to blame. The impact is felt by the shareholders who shoulder the loss. For instance, Papa John’s attributes the decline on their pizza sales to the perception of their customers towards NFS, stating that “customers have a negative view of the chain’s association with the NFL… NFL leadership has hurt Papa John’s shareholders.” Realizing that Papa John’s is one of the sponsor’s and advertiser in NFS, the division is clear since other sponsors maintain that NFL and its leadership should not blame due to the uproar in the conduct if its players. An example is Buffalo Wild Wings Inc which finds an opportunity in the controversy, stating that they “see is a lot of our shoppers and prospective shoppers are watching NFL” thus will do another chicken advertisement with NFL. Amidst this contention, the society is divided in whether the conduct of players is tarnishing the image of NFL, which would answer the question whether NFL should blame for the suffering of the shareholders of the affected companies.

It is important to note the division among the legislators and the legal society altogether. A portion campaigns for legal action against those who do not stand while others stress that those kneel deserve a hearing. In such a scenario, advocates have been seen interpreting the constitution to match their interests, and the discussion takes the form of gun laws against gun rights. Attorneys for the kneeling are quick to point out that American’s perceive the flag differently while their counterparts view that the act is unlawful regardless of the rationale behind it. The difference in based on the various schools of thought and the manner in which thy define right and wrong. The common American is left torn in between, and some feel unrepresented when their elected legislators have a different stand. This view explains John Schnatter’s statement that the controversy “should have been nipped in the bud a year and a half ago,[6]” a comment that has had hundreds of interpretations. All in all, kneeling during the anthem has polarized the American society.

Notably, taking a kneel can also be seen to unite the society in a number of ways. To begin with, it is important to realize that players of all races take part in the NFL.[7] It is common knowledge that people of all walks unite during an aversive occurrence. Although police brutality is not limited to blacks, Kaepernick takes the role of doing the unimaginable and links the brutality to racial oppression. It is his act that drives the president to instruct team owners to sack any player who kneels during the national anthem. Following Trump’s direction, payers in various teams unite in protest. As a result, more players have been seen kneeling during the national anthem, and some sitting. This reveals that the act has united football players to peacefully protest against the said racial profiling. Other sources indicate that while Kaepernick protested specifically against police brutality, the current kneeling is against social injustices, among them the direction to fire players that Trump aired. This shows how the controversy has enabled the minority group to unite and air their views[8], which is one of the ways to overcome the tyranny of the majority.

Similarly, the act has united in the quest for better governance. Despite the divisions, all the involved parties are working towards good governance though with varying viewpoints. The ultimate end of such a controversy should not just be seen as polarization, but some ties would get stronger. For instance, the NFL is divided, but the continuity of league reveals an amazing strength which proves that the society can be united regardless of the differences in viewpoints. Due to the incident, several civil societies are advocating for cohesion in the nation to bridge the racial divide[9], which they were not doing earlier. Such actions mean that what appears to be divisive per se can be a source of unity if well managed. If the players feel that their voice has been heard, it will take on person to reinstate standing just as one pioneered the kneeling. This would mean that their grievances have been addressed and would leave the society more united.

To sum up, the NFL controversy and kneeling during the national anthem has contributed significantly to division. Polarization is evident in the football teams, administrators, legislators, NFL and its sponsors, and the society at large. Nevertheless, the controversy has united football players and can potentially unify the society. Since the players are taking the kneel as a group, they are more motivated and an ear to their grievances would soon clear the way for a better society.

Taking a Knee in NFL: Respect towards the National Anthem?. (2019, Aug 19). Retrieved from http://studymoose.com/taking-a-knee-in-nfl-respect-towards-the-national-anthem-essay 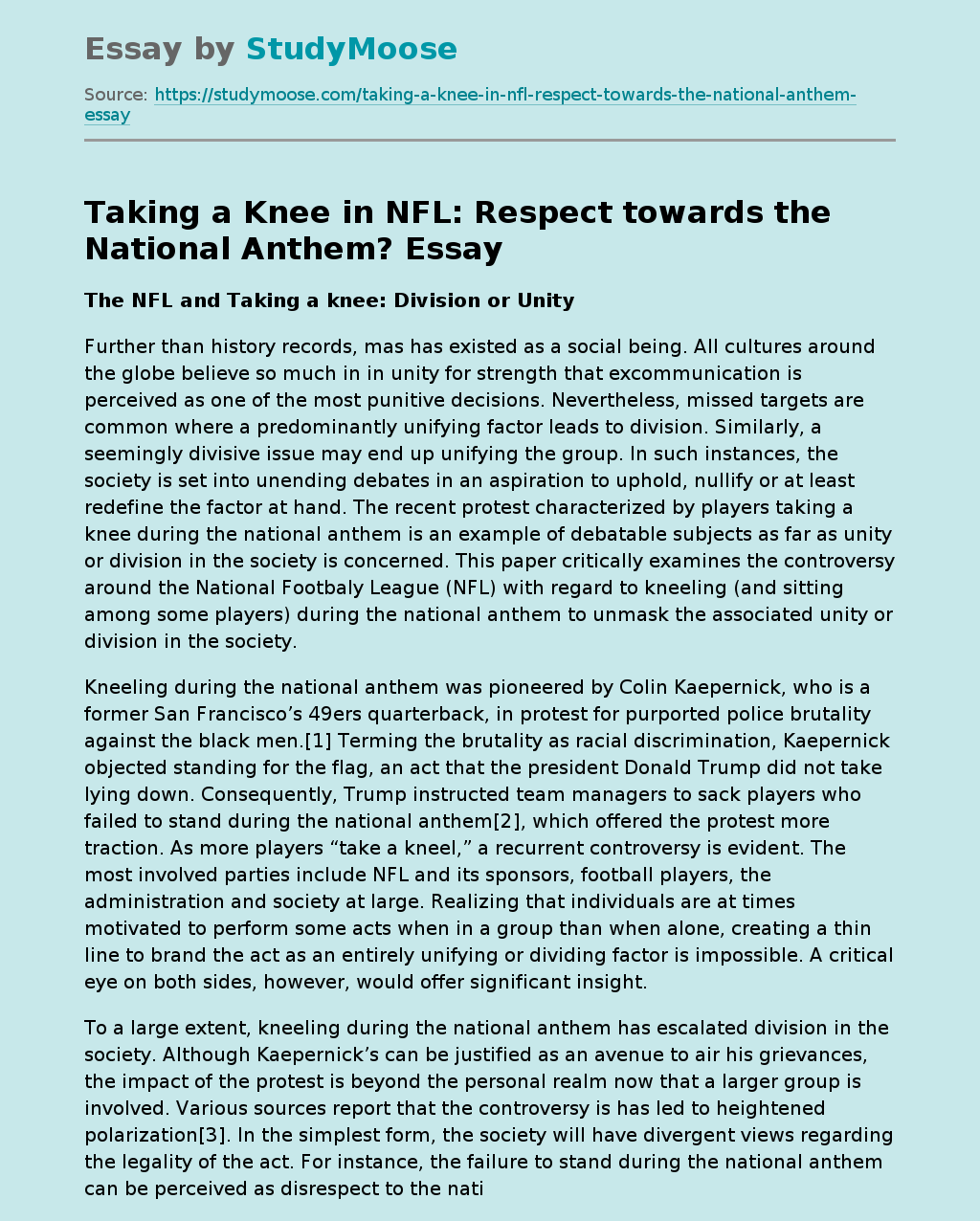