In 2019-2020 Australian had seen it worst firer ever when the country was declared as an emergence. Hi everyone. My name is Courtney Elliott. Today I am here to talk to you on Take Action Day. Firstly, I would like to say thank you all for coming and I want to thank our local council for organising Take Action Day. The 2019-2020 bush fires devastated our country and a hard topic for most to hear about. As you know, New South Wales and Queensland declared a state of emergency due to these fires and infernos also ravaged South Australia and Western Australia as well.

Why have Australian bush fire season become so catastrophic? When the 2019 and 2020 bush fire started from the longing drought that effect 95% of our country. As climate changing is causing longer and dryer drought each year. Australia summers have becoming dryer each year allowing it to become easier for firer to start due to the very hot and dry days.

I believe that Australia fire season have more recently become bad. Think back to when the 2009 Black Saturday firers killed 173 people in Victoria and burnt 1.1 million acres and one million wild and domesticated animals died. More recently, the 2019 and 2020 Bush Fire had burnt 17.9 million acres in Australia, a total of 28 people across Australia have died including several volunteer firefighters and about half a billion of our wildlife affected as well. Australian current summer season had seen the country also in worse drought. When last September was the driest on record, along with December heatwave that broke the record for highest average temperature.

Climate change was blame for the worsened catastrophic bushfire conditions. The Beau of meteorology released a report about Australian climate change is caused by the frequency of bush fires, drought and floods affecting our country each year. Human are being blamed, when New South Wales police charged at least 24 people at the start of 2019 with deliberately starting bushfires. In Australian we all now the Australia has experienced a decline in their rain fall with Southeast Australia has experienced a 15% decline in late autumn and early winter rainfall. Australian temperature is increasing meaning more record-breaking hot weather, leading to more extreme fire danger.

In Australia we all know that the 2019 and 2020 bush firers had affected everyone, but on different levels. As everyone in Australia had firers impacting them or knew someone being affected by it. With the firers causing grief and sadness all around the country. As the fire burnt people homes down and then they are having to come home to find everything gone and finding out that they have lost a love one in the fire. On top of all this 2019 and 2020 firer hadn’t just impacted one community but a whole country.

Furthermore, your local community could reach out to the local aboriginal and Torres Strait island and seek knowledge about how they use to carry out back burning and their fire prevention strategies have worked in the past. As Country Times’ tell us farmer are saying coming into the next current bush fire season there going to break the law with burn off to reduce the chance of having a repeat of the 2019 and 2020 bush firer season. Each year before summer farmer would burn off to reduce fact of bush firer season. But from now burning off before summer is illegal and cannot be done. farmer say by not burning off their farm it has played a part is why our firer season have become so catastrophic.

The question is can we change bush firers season from being so catastrophic. Yes, with Changing climate change, using renewable energy sources and using less public transport even buying reusable shopping bag make a different. As climate is impacting our country with the rising temperature, dryer summer and longer drought cause it to become more dangerous for bush fire season. What can we do to make a different to our country climate change, be more conservative with energy usage, Recycle and encourage the use of renewable energies. As climate change has shown to have a part in the latest bush fire weather.

Australian 2019 and 2020 bush fire season is one to remember with 28 people across the country died, 17.9 million acres burnt and half a billion of our wildlife affected as well. Climate council shares that Australia has a 15% decline in late autumn and early winter rainfall. The days will get hotter and dryer summer days increasing the catastrophic firer season. This is why Australia need to change with being more conservative with energy usage, Recycle and encourage the use of renewable energies. Thank you. 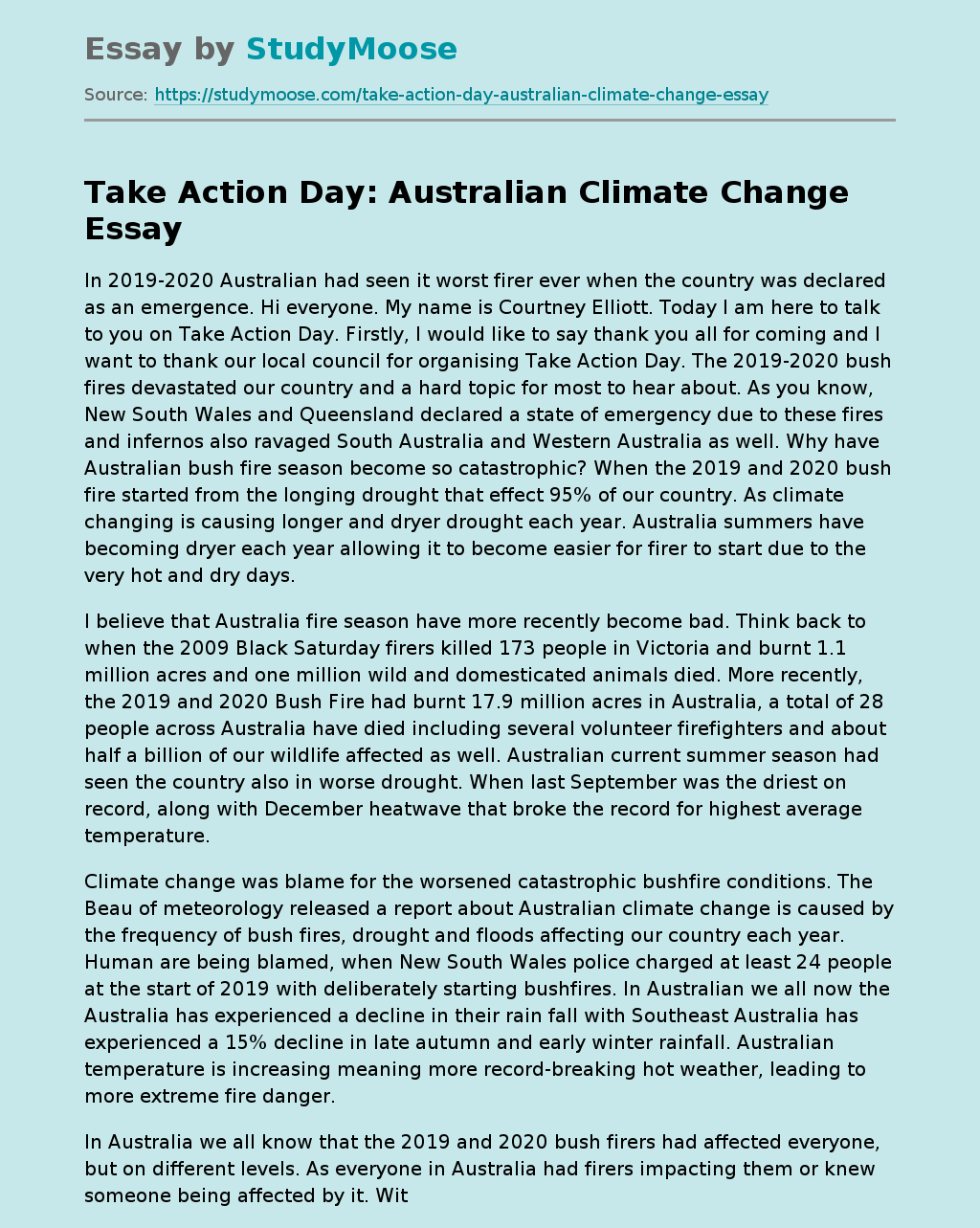