A computer is a device or machine for making calculations or controlling operations that are expressible in numerical or logical terms. Computers are constructed from components that perform simple well-define functions. The complex interactions of these components endow computers with the ability to process information. If correctly configured (usually by programming) a computer can be made to represent some aspect of a problem or part of a system. If a computer configured in this way is given appropriate input data, then it can automatically solve the problem or predict the behavior of the system.

Don't use plagiarized sources.
Get Your Custom Essay on Tabulation System Just from $13,9/Page

System is a whole compounded of several parts or members, system, literary “composition” is a set of interacting or interdependent entities forming an integrated whole. A concept of an integrated whole can also be stated in terms of a system embodying a set of elements, and from relationships between an element of the set and elements not a part of the relational regime.

Tabulation means putting a data in a table. Table means a diagram which has a few vertical and horizontal lines. It’s a presentation of a data in a lucid form. It is the act or process of tabulating and table displaying data in a compact form.

A computer program has been developed at Purdue University that will greatly reduce the time required to conduct a 4-H contest. The computer program, written in Clipper and Dbase 3.3 Plus, handles registration details including supplying confirmation notices and a printed receipt to all coaches; prints contestants labels; assigns and calculates class cuts when necessary; tabulates scores by age divisions (clover, junior, senior, etc.), organizations (4-H, FFA, etc.), and contest (diary, crops, horticulture, etc.); and ranks individuals and teams by individual classes and overall contest. The program sets and prints results in a variety of options to fit user needs.

Some automated scoring program built in Excel and uses embedded formulas to calculate the final scores and rank the contestant of each heat. The scores will be written down on paper, and then transcribed to this program as time permits either during the heat, or immediately following. Some practice and experience with this program prior to a contest is highly recommended. Additionally, having a dedicated tabulator who is neither a judge nor a contestant would be ideal.

Today, events are everywhere and judges are always involved in tabulating results. An ideal computerized system that would give them a satisfaction for judging, and a system that fits their different needs would result to flexible module for them to access the system easily.

The Pangasinan State University (Lingayen Campus) has pageant events. The PSU is currently using MS Excel and MS Access in tabulating. But, that was prepared right before the said events and sometimes it does not accomplish the user’s expectations.

PSU College of Computer Science is in charge in providing the means for tabulating results for Pageant Contest. If a system for tabulation will be implemented multiple benefits will bring. The researchers conducted a research on the tabulation matters of the PSU since tabulation system does not still exist. Based on the interviewee and the observation, the researchers decided to promote high quality software and yet efficient to tabulate results. The system will be operated in Windows Based to make it more understandable and user friendly. The judges can determined whatever process he wants to execute.

In Purdue University the flow of their system starts with registering contestants, preparing confirmation letters, receipts and mailing labels, as well as tabulating scores can be extremely time-consuming. Purdue’s computerized contest organizer and tabulation program saves time by allowing contestant’s names and addresses, once entered, to be used to prepare registration forms and contest scorecards.

Purdue University developed a computerized contest organizer & tabulation system that will greatly reduce the time required to conduct a contest. This helps eliminate problems encountered with judging events. Computerized tabulation is less likely to result in scoring errors. When processing data by hand, errors may occur when transposing data from scorecards to a master score sheet and when adding scores. By using Purdue’s computerized contest organizer and tabulation program; errors are less likely to occur. Further, the system won’t tabulate final scores if data are missing, thereby giving verification that the data set is complete.

Results are available more quickly when using a computerized versus manual tabulation program. The computer adds scores, ranks individuals and teams, breaks ties, and divides contestants by division and age faster than a group of individuals. The program was developed to make the job of planning and conducting a judging event easier, given the normal problems encountered when manually performing judging tasks. With this study it discusses the flow of tabulation results and it talks about computerized contest organizer and tabulation system which also includes in the developed system. It can help the judges to insert and update records of contestants in a short period of time. This study relates with the proposed system through its fast and accurate tabulation of scores which is one of the systems features. Importance of the Study

The study provides ideas to help the global and local community specially the Universities to adapt with the advance technology regarding Computerized Electronic Tabulation. The study also provides additional knowledge for those who are interested to undergo the same study.

The computerized tabulation will lessen the time, effort and money being consumed in preparing the means of tabulation. The different colleges of the university will also benefit with the use of the said system. Statement of the Problem

The study aimed to develop and implement Pageant Tabulation System in PSU. Specifically, the study sought to answer the following problems:

The main objective of the study was to develop and implement Pageant Tabulation System.

The following terms are defined to clearly understand the terminology and concepts use in the study. Data – Are the important facts and figures regarding the contestants and judges such as names, personal information.

Data Flow Diagram – A top down structured analysis and design tool, which consist primarily of rectangle with rounded corners representing how data and people interact.
Electronic – is a device or technology associated with or employing low voltage current and solid state integrated circuits or components, usually for transmission and or processing of analog or digital data.
System – composed of different modules, conceptual framework output.
Tabulation – it is process were the result was computed and arranged sequentially.
Table – means a diagram which has a few vertical and horizontal lines.
Pageant – a beautification show, or an elaborate spectacle.
Tabulator – either board of judge or scorer.
Judges – A person involved in evaluating the contestants and result.
Contestants – a person involved in contest, and performer.
Category – a classification or a class.
Percentage – rate or proportion of each hundred;
Rank – position; level;
Module – architectural unit of measurement;
Visual Basic – object oriented high level programming language based on Basic Language.

It is used for writing applications as well as application generator. It provides a graphical environment in which you visually design the forms and controls that become the building blocks of your applications and is specifically designed to utilize internet. It comes with several controls that allow you to create web based applications, called Active X executable.

This chapter presents the methodology, the data gathering techniques, the modeling and design used in analyzing the proposed system and the scope
delimitation of the study. This will serve as a guide to the researchers on how they will conduct the study’s objectives.

The development will use RAD- a linear sequential software development process model that emphasized on development cycle using a component based construction approach, as a method that enables a development team to create a fully functional system within a very short period of time. This will be used to develop the system because of time constraints in the development schedule. RAD Model has the following phases:

Brainstorming. Brainstorming is a group creativity technique designed to generate a large number of idea for the solution of a problem. Brainstorming focuses on quantity rather than quality of ideas. The assumption is that the greater the number of ideas generated, the greater the chances of producing a radical and effective solution. The researchers establish a possible way to solve the problem including the planning, making, and designing. The researchers applied brainstorming in the study by discussing which of the important data to summarize, what the flow of the system must have. Also the researchers discussed the sources of data and what benefit the system can give. Requirements Gathering and Analysis. In order to filter the answer that would best suit to the problem, the researchers used an indispensable tool in gathering information.

During this stage of study development, the researchers, specifically the programmer after processing requirements, analyzes intensively the objects to be created for the study. User Review. The initial system is reviewed by the intended users and makes suggestions to validate further requirements be added. Finalize Code. In this point the codes are finalized after the users are fully satisfied with the system. This activity contains documentations process and the output of the study. Deliver System. The delivery system involves training users on how to install and implement the system. This also involves user policies that help reduce security risk during the implementation of the system. 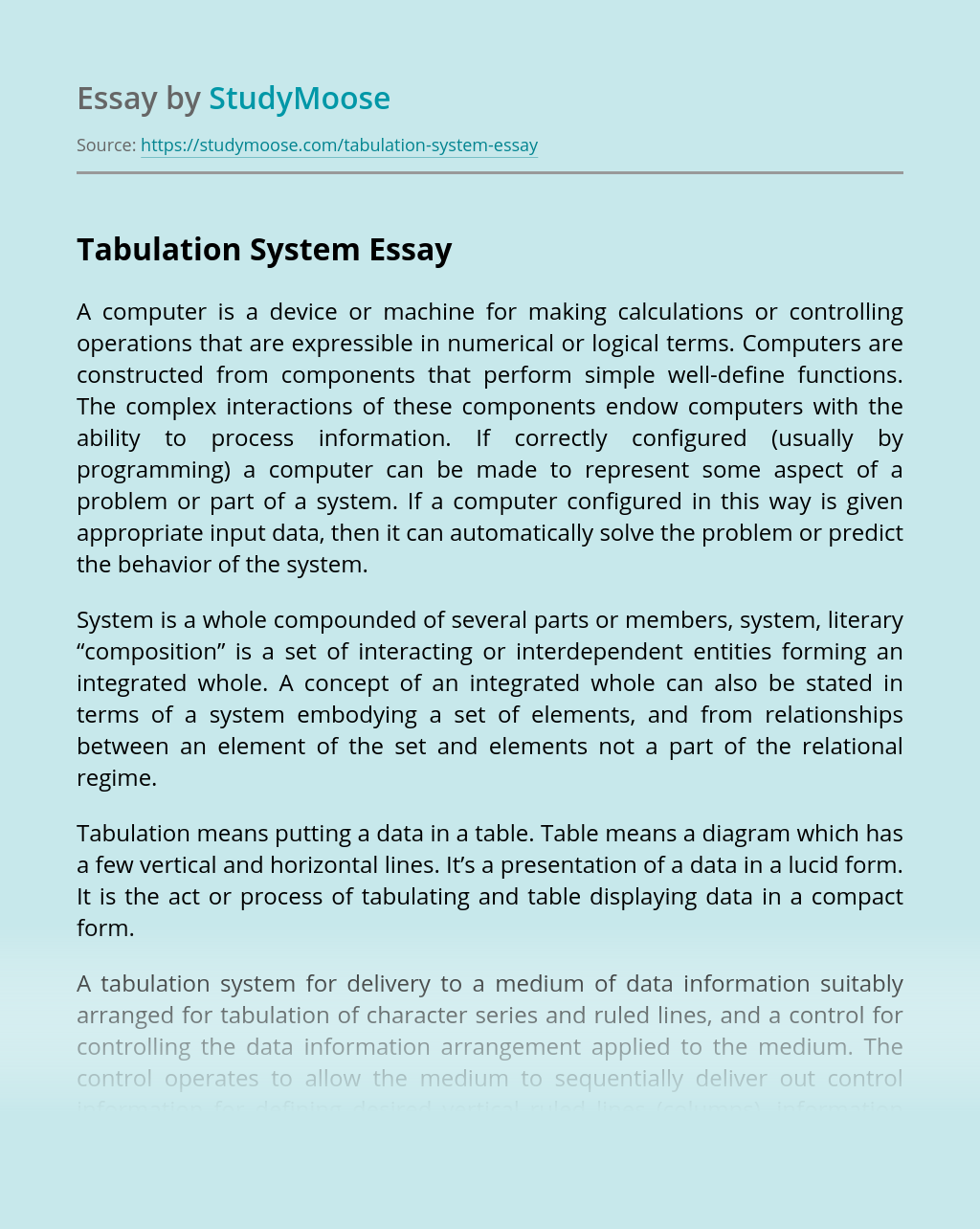 Rate this post 1.1 Describe different ways of organising data that has been researched. Data is a group of information that are used for various purposes like analysis, evaluations and to arrive at certain results or conclusions. Data reporting is a process where data is extracted form a source or many sources and then converted...

A glimpse of Big Data

Rate this post “Big data is not a precise term; rather it’s a characterization of the never ending accumulation of all kinds of data, most of it unstructured. It describes data sets that are growing exponentially and that are too large, too raw or too unstructured for analysis using relational database techniques. Whether terabytes or...

Rate this post A computer is a device or machine for making calculations or controlling operations that are expressible in numerical or logical terms. Computers are constructed from components that perform simple well-define functions. The complex interactions of these components endow computers with the ability to process information. If correctly configured (usually by programming) a...

Rate this post Project Background Problem/Opportunity Description The following problems or opportunities listed below are organizational problems that the proponents discovered after analyzing the process of not having a system for employee’s payroll: Manual Payroll can’t handle large numbers of employees; Multiple works and positions of an employee makes the payroll more complicated; Searching of...