Nowadays, theEnglish language is very important and spread widely all around the world. Everybody has their own reason why they study English language, for example business contacts, study, exams, and for daily life. In fact, the teacher teaches only Standard English in the English classroom. There are few teachers that mention non-standard English such as taboo words in their classroom. What are taboo words? Taboo words are“sanctioned or restricted on both institutional and individual levels under the assumption that some harm will occur if a taboo word is spoken.

Don't use plagiarized sources.
Get Your Custom Essay on Taboo Words Just from $13,9/Page

The exact nature of harm to befall the speaker, listener, or society has never been entirely clear” (Heins, 2007). We use taboo wordsto be emotionally expressive, but people use taboo words with their friends to show the depth of their relationship and there are many reasonswhy we use taboo words.

What are the most frequently used taboo words compare with their own language and English language? Why don’t students often use taboo words? How do we use taboo words? When should we use taboo words? Why don’t teachers put taboo in the lesson? How do they receive taboo? The perspective of taboo words has changed from past to present. Taboo words were unacceptable from ten or fifteen years ago. The BBC has a list of words whichare not allowed to be used on broadcasts but there are increasing use of taboo words in the contemporary media contextas you can see in the present(Arndt, Harrey and Nuttall, 2000).In real life, native speakers don’t only the Standard English sometimes they speak slang, taboo words or swear words.

When they shout of you with taboo words, do you know what do they want or what dose it mean if you don’t know the meaning of taboo word? They might insult you or they might want to hurt or threaten you. The reason that taboo words should be taught parallel with Standard English is because students are aware when they are threatened or are insulted. It’s not necessary just for protecting themselves from danger but it is used more and more frequently in everyday speech and is becoming increasingly common in songs – particularly in the lyrics of popular hip-hop music, and in the media. There are many studies which have indicated that taboo words occur frequently in everyday speech, especiallyin arguments (Jay & Janschewitz, 2008).

Reasons for using taboo words depend on the conversational goals of speaker for example feeling (expressing pain, frustration, annoy, anger), adding emphasis to statements whether positive or negative in context.In addition,if you’re with a group of close friends, the more relaxed you are, the more you swear (sign of comfortableness).Or the reason of acceptance in some social circle for example, in a group of workmen, they said “If you don’t join in, you are thought an outside” (Wright, 1974).There are a lot ofstudies which have showed that those who swearregularly suffer less from stress than those who do not such as if I say ’motherfucker’ it makes me feel better that when I say ‘darn’ (WEB).

There are researches that have indicated that taboo words appear to cause less anxiety when spoken in a foreign language. L1 and L2 are frequently learned in different context. The L1 is learned in the context of family life and thus generally includes emotional extremes and usually also an individual’s earliest encounters with the gamut of human emotions (Schrauf, 2000). An L2 is frequently the language of school, work, and professional achievement and thus comes to be associated with emotional control, autonomy, and achievement (Dewaele & Pavlenko, 2002).Taboo words are remembered better than nontaboo words that similar idea with research about recalling taboo words has showed that the arousing properties of taboo words produce vivid memories without elaborative processing, which may be sufficient to override the burden of limited attentional resources. On the other hand, nonarousing words rely on elaborative processing for better memories (recalling taboo and nontaboo words, 2008).

People respond to taboo wordsin L1 better that L2. They have strong reaction to emotionallyladen childhood reprimands in the L1 but not the L2 (Harris, 2003).They prefer to use taboo wordsfrequentlyin their own language more thanEnglish languagebecause they have confidence and they know how to use and when to use it in their own language. In the English language, they lack confidence and experience taboo words because taboo words in English can be expressed in many forms not only in negative form. As mentioned before, international students do not often use taboo in the English language because they are not sure about grammar, situation andlack of confidence. It will not surprise if students do not often use taboo in English language because taboo words can be used in many forms of grammarsuch as noun, verb, adjective or even adverb, for example the word “fuck”. It can be explained in grammar as following table. The Grammar Of ‘Fuck’

Teachers didn’t teach taboo words in the English classroom because they think that it’s not necessary. In fact, it depends on student needs, for instance people who want to study business. They don’t need to study any taboo words because when they do business, they use just terminology words to talk with partner or boss. On the other hand, if they hang out with friends in the evening after work they might have to speak or understand taboo in communication. In additional, hip-hop groups always use taboo words in their music or even in their communications in daily life. So if students want to join in a peer group or they just want to know the meaning of hip-hop song.

They need to understand the meaning of those taboo words and know how to use it as well. So teacher cannot decide that they need to teach or they don’t need to teach, but it depends on students needs. People think that taboo words should not be allowed to be taught in the English classroom because it’s rude and inappropriate especially teacher and older. Taboo words are used in many form not only used to insult or abuse. In some situations, we use taboo words in adverbs to clarify the picture. For example,Jeffry eats too fucking much. It means that he eats a lot more than human being eat. In the present, taboo words are used more openly, publicly and with more confidence than ever before(Hoster, 2005). Another case, teachers do not often teach taboo words in the English classroom because teachers are not familiar to taboo words for the reason that they aren’t native speakers.

There are few natives that teach in Asia,for example in Thailand. Most teachers are Thai people they have few knowledge about taboo words in the English language because they never learn it and they never use it in daily life. If students are interested in this topic, Thai teachers cannot explain to them. If students want to study with natives, they have to pay extra money just for few hours of teaching which is quite expensive. So they don’t have a chance to learn daily unless Standard English. 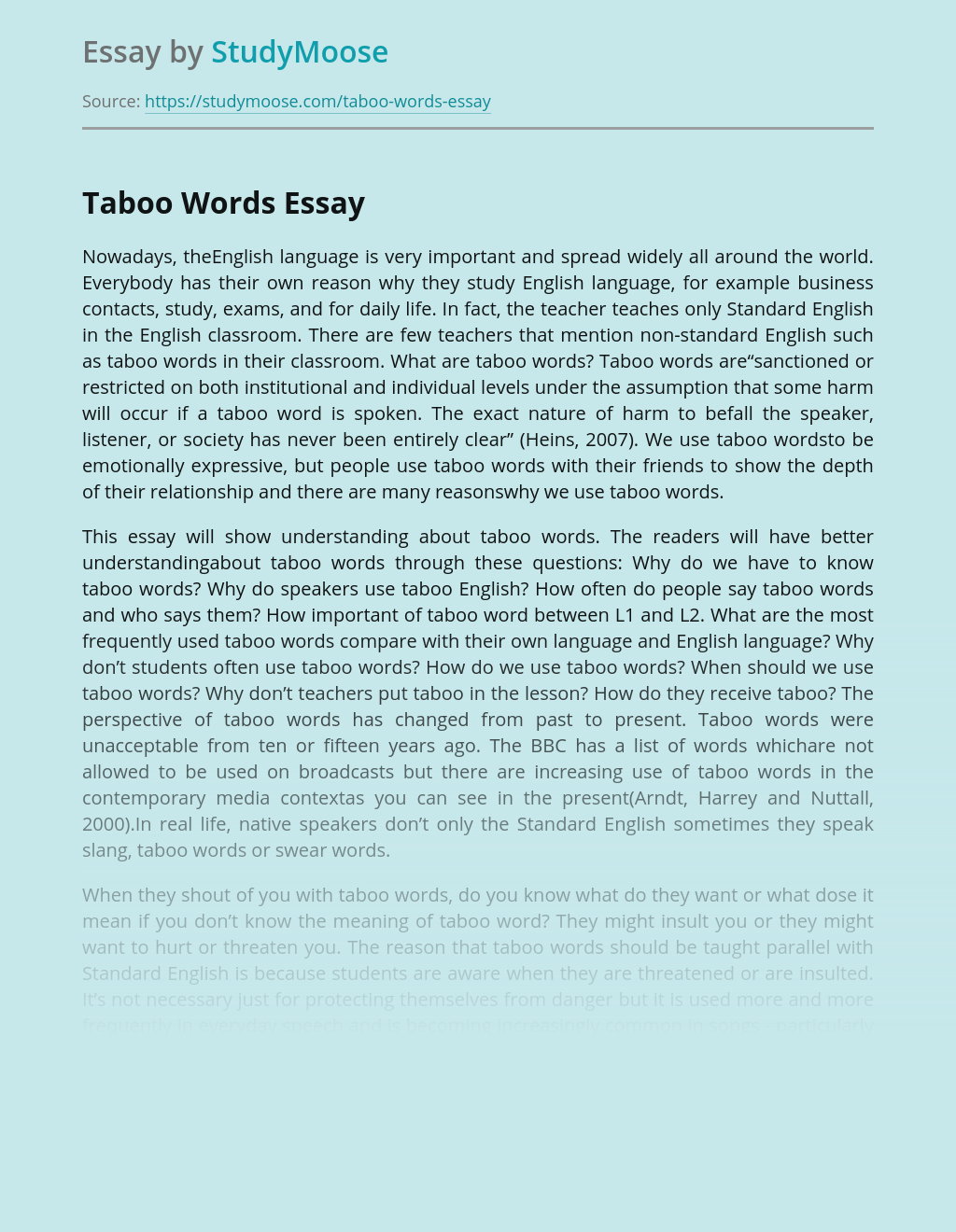 Rate this post John Ronald Reuel Tolkien (1892-1973) was a major scholar of the English language, specialising in Old and Middle English. Twice Professor of Anglo-Saxon (Old English) at the University of Oxford, he also wrote a number of stories, including most famously The Hobbit (1937) and The Lord of the Rings (1954-1955). The name...

How to write a rationale?

Rate this post In 200-300 words, answer the following questions in paragraph form: •How is the context of the task linked to the particular course? •How is the task intended to explore particular aspects of the course? Consider the changing historical, cultural and social context in which particular texts are written and revised. Students are...

Rate this post What we call a “Chicago accent” is actually called the Inland North American dialect. This encompasses the major cities around the Great Lakes. The dialect used to be considered the standard American accent until the region experienced a vowel shift, now called the North Cities Vowel Shift. Who Speaks the Chicago Dialect?...

Rate this post Introduction We often hear about words being added to dictionaries as they become part of everyday vernacular, but have you ever heard about any words that get removed? Some people argue that if a word has existed at some point in time then it merits a place in the dictionary. Don't use...

Rate this post There are thousands of languages in the world, such as Spanish, French, Chinese, English…However, No one can do better job in the second language than their mother language. In the article Amy Tan’s “Mother Tongue”, Amy Tan emphasized her idea that we speak different languages unconsciously and we are categorized by the...

Rate this post Using what you have read in this introduction to TESOL and your own knowledge, what do you consider to be the blocks which may prevent language learning? When speaking about difficulties in learning and teaching foreign language different authors use different terminology. Some of them speak about mistakes, misbehavior (Cummings, C.: 2000),...

Rate this post Language is both an individual possession and a social possession. We would expect, therefore, that certain individuals would behave linguistically like other individuals: they might be said to speak the same language or the same dialect or the same variety, i. e. , to employ the same code, and in that respect...