Ishaan Awashti- is an 8-year-old boy, he has a disease called dyslexia wherein he sees reversed letters or “dancing” letters and has poor mathematical capacities, due to that manner he hates coming to class and sometimes cuts them, he is always has a failing grade on exams, a wrong answer during recitation, and always placed on detention; even though he is a naughty boy he has something special within himself. Ran Shankar Nikumbh- a new art teacher from Ishaan’s boarding school he has a playful character of teaching and he make sure all student in his class was given a recognition, and Ishaan was not an exception to this.

Even if all the teachers in this institution say that this boy was not normal or is a moron, he doesn’t judge Ishaan thus finding the capabilities of this child as an action he teach Ishaan how to read and write and some of mathematical concepts. Maya Awashti- Ishaan’s mother, she gave up her career just to teach Ishaan and Yohaan, yet one of his child namely Ishaan become naughty who always fails his class.

She sometimes blames herself for Ishaan’s failures and ashamed to interact with her neighbors because she thinks that all her teachings was useless or junk.

She cares for both Ishaan and Yohaan yet, She always compare both of them, and in the event where she found Ishaan forced his brother to make an alibi or a fake excuse letter for his absence she is one of the people who are willing and wanted to sent Ishaan to a boarding school.

Nandkishore Awashti- Ishaan’s Father, A successful executive he is a strict and lawful father he wanted his sons to be honored and be placed on top of everything they do. Yet Ishaan was not the one he thinks his son will become and he is ashamed of that manner because according to him what a child do reflects what the parent teaches the child.

He is also responsible why Ishaan was enrolled to a boarding school, he doesn’t believe in everything Ishaan does and he also neglects what Ran Nikumbh was pointing out when he said Ishaan has a dyslexia. Yohaan Awashti- He is Ishaan’s older brother, he is always on top of his class, which always receive high grades and joins every contest, their parents are very proud of him yet, he doesn’t wanted to be compared to his brother Ishaan. He cares and appreciates his brother, he even make a fake excuse letter for Ishaan even though he knew about the consequences of his action.

He love Ishaan so much and doesn’t agree on the plan of their parents to send Ishaan to a boarding school. Plot: The main character of the film is Ishaan an 8-year-old naughty boy who always fails his exams, receives punishments for his wrong answers and even placed to detention. Nobody treated him accordingly at first so whenever he is placed in detention, bullied, laughed, mocked, failed, and compared he will always make a way for him to be happy and forgets about that event.

There are also times where Ishaan due to his failures think that he is not normal or he is unique and wanted to be isolated. Due to an event where Ishaan was placed to detention, and fails to do his math assignment he tries to cut his classes and make an excuse for it, as a result his parents send him to a boarding school and be separated to them, because they think that all of Ishaan’s action was reflected to them, and they are the one’s suffering Ishaan’s faults, which affects their dignity and pride.

On the boarding school nothing was changed, still Ishaan receives failing grades and being punished for wrong answers as an example during one of his art lesson, Ishaan was punished by not pointing the dot and replying “I don’t see it” because he is staring blankly and not paying attention to his teacher the punishment was slaps on his palms 5 times and said that he even receive more if he will commit errors on his paper, yet when a new art teacher teaches their class everything was changed now Ishaan participates and given recognition, yet at first he is still staring blankly but when Ran Nikumbh, teaches Ishaan about English and math subjects he finds out the capabilities of ishaan and sees his potential in art and architecture.

The film ended with Ishaan’s awarding ceremony, he won the art contest and now his parents become proud of him, all thanks to his art teacher Ran Nikumbh which spends some time to teach Ishaan on Math and English. Ishaan was adored by his fellow classmates because even though at first he shows blank affect and doesn’t respond, he learns quickly and become part of the group again. Reaction: In the quotation “Don’t judge the book by it’s cover” the film portray a meaning on this quote because Ishaan even though has dyslexia he has hidden qualities in him that needs to be polished and enhanced, when Ran Nikumbh his art teacher spent some time to teach him he finds out that Ishaan has potential in architecture and art, In the end of the film his environment now realize what Ishaan was capable of doing or where Ishaan excels.

I will recommend this film to all parents, soon to become parents, students, workers and to all people who were judged and think that the world was angry to them for no apparent reason this film leave a message to anyone that behind every individual lies a special capacities maybe not in academics, talents and recognition, yet there is a special or a unique character which is hidden and needed to be polished for it to be revealed and enhance to become useful, and in that manner where an individual was left behind in anything or in any scenario, there is still no room for bullies and no room for harsh words, because in the end of the day that person makes a point to establish an improvement within himself and that bully one’s are the one who are left behind.

For parent’s as a guide to your children you must become role models to them, you must not the ones who will neglect the capacities of your child in any aspect thus there must always room for enhancement. In any scenario of life there is no living person who is perfect in anything that he does and fails. You must not have a high expectation with your child’s academic performance and capacities, you must always expect some failure because in that failure you think that your child doesn’t learn anything but for them failures are the ones who make them independent, they learn in it, why because they learn to stand up and learn that in that scenario a change should have been done.

The most tragic part of the film for me is when Ishaan was pleasing his father not to sent him to a boarding school and saying he will not make any mistakes again or will not put his father’s name into shame. Also when Ran Nikumbh was teaching Ishaan in the English alphabet and establishing rapport while they are just making funny stuffs like building clay figures and artworks. As a nursing student and being fond of drawing, I also see the point or the real essence of the film and appreciate the intervention of Ran Nikumbh, an art therapy where Ishaan’s capacity in art will be recognized and his plans on how to interact or establish a trusting relationship to Ishaan in making clay figures while teaching Ishaan about the ABC’s. 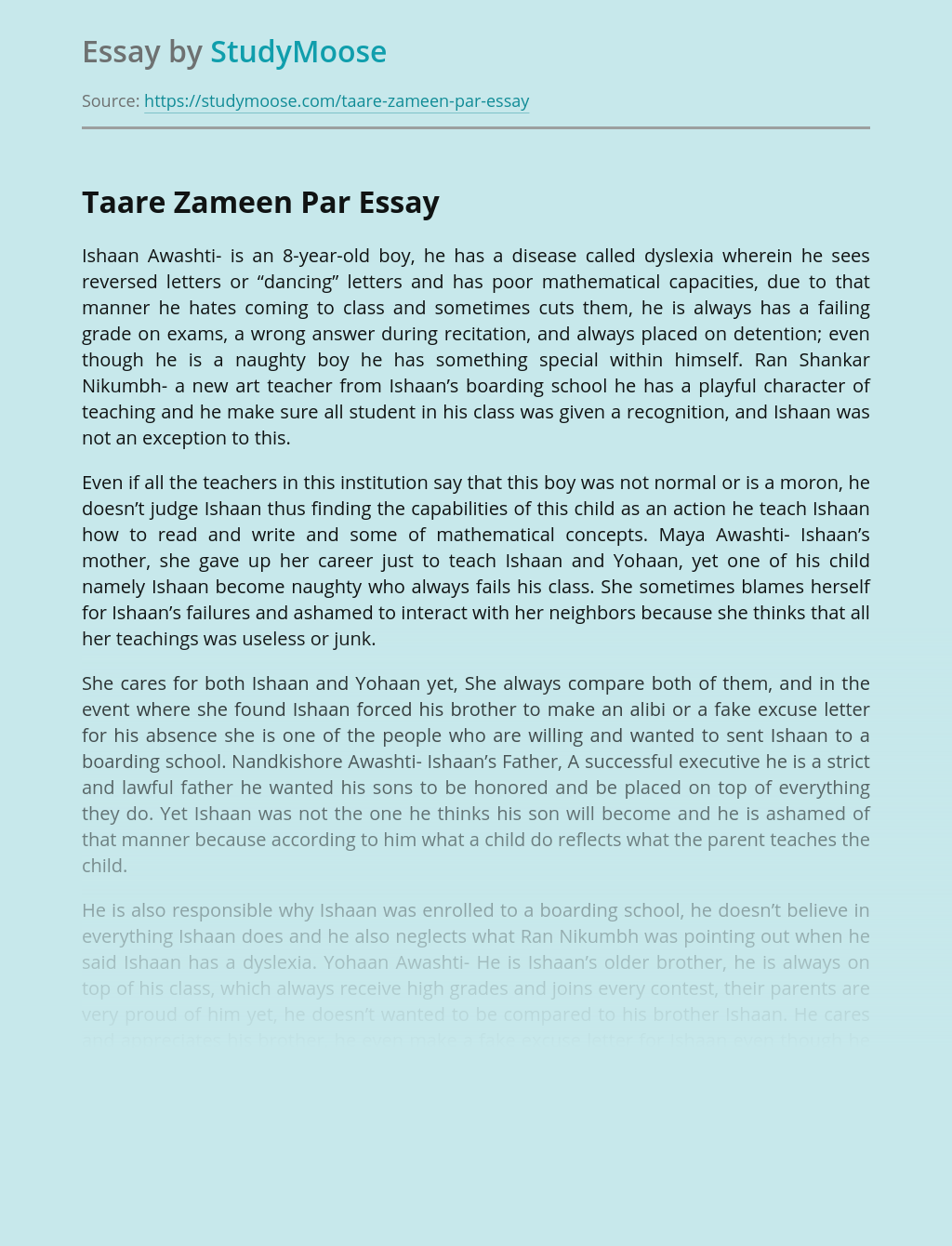